The Lure of Melancholy at Chanel

Marked by an upbeat defiance, one of Karl Lagerfeld’s best collections in recent years was driven by his making peace with the past. 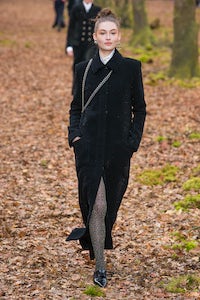 The Lure of Melancholy at Chanel

Marked by an upbeat defiance, one of Karl Lagerfeld’s best collections in recent years was driven by his making peace with the past.

PARIS, France — The majestic set of the Chanel show on Tuesday was an allée of trees, like the ones that led up to the house in the country outside Hamburg where Karl Lagerfeld spent his boyhood. The trees were rented from a company in Normandy. After the show, they would be reclaimed and processed, turned into furniture or something. It was only when Lagerfeld saw the set that he realised what they reminded him of.

Memories. It’s surely significant that this and his Metiers D'Art show in Hamburg, his two best in recent years, have both been driven by his making peace with his past. He scoffed at the thought of going back to his roots. “I don’t see it that way, I’m not a tree.” Still, the long, lean silhouette, the somber colour palette, the melancholic mood harked back to Hamburg in December. In between came the couture, with its unabashed, sugary prettiness. That wasn’t an instinctive move on Lagerfeld’s part. “I loved the mood in Hamburg,” he said. “That was more me. I know now I am not a creature from the South. I’m somebody from the North. When I was young, I didn’t realise that. Now I am very conscious of it.”

So, being from the North, Lagerfeld showed a collection for Autumn/Winter that honoured the obligations of cold-weather clothing: cardigan coats, puffa jackets, long tweedy coats, their hems dissolving into a frenzy of coloured thread. He said the length was the proportion that is closest to his heart. "What you saw is what I like, I didn’t try to make it commercial." The knitwear was shot with dark glitter. The chunky furs collaged with thick knits were fake (Chanel won’t use real fur) but they had a lavishly polar substance. A dark jacquard of fallen leaves compounded the melancholy.

But Lagerfeld gave everything a glamorous sheen, lurex and lamé and fabrics that no one has a name for yet. Maybe that was his way of acknowledging the lure of melancholy, at those times when the trees are bare, the night draws in…Nah, too obvious. Karl accessorized his models with big red and pink mufflers and fingerless leather opera glove in shades of pink and orange. A little upbeat defiance.

Still, he did leave me with a recommendation for a two-volume set of Carl Jung’s writings on melancholy, with the addendum that there was maybe an easier single volume. Lagerfeld clearly divined that I’m not a two-volume kind of guy.