NEW YORK, United States — On a rainy Friday night, Young Paris, a Congolese-French-American rapper who pairs tribal face paint with eccentric streetwear and is unafraid to embrace his feminine side, was among the crowd piling into Spring Studios for Telfar’s New York Fashion Week show. The label, founded by Liberian-American designer Telfar Clemens, has proposed a progressive vision of genderless clothing, designed “for everyone”, for the last 13 years and the buzz at the show was also one of force from New York’s multi-racial, LGBTQ creative community — and their champions.

Although it took Clemens, also a well-known DJ, over a decade to receive a fashion week review from a major publication, he has built a strong following on his own, with a little help from the community he calls his family. “These are people I'm genuinely friends with and people that I respect,” explained Clemens, who grew up in Lefrak City, a section of the New York City borough of Queens.

It’s the colourful clan he tapped for his show, a concert directed by Ian Isiah and Dev Hynes (aka Blood Orange), featuring a cast of musicians dressed in his rock-inspired collection, performing an adaptation of “Grateful” by Hezekiah Walker, the gospel legend and pastor of Brooklyn’s famous church choir "Love Fellowship Tabernacle."

Shortly before 10pm, Hynes took to a circular metal stage doused in red lighting and began on the keyboards. Then came a heavily tattooed Isiah, sporting gold fronts and his own version of Jheri curls; alt-R&B singer Kelela, who identifies as queer, wearing her crown of dreadlocks in an updo; Walter Pearce, a slender casting director for Midland Agency, who had styled his hair in a bouncy blowout and is known for thinking beyond industry beauty standards; and Arsun Sorrenti, son of Mario Sorrenti, who wore a grungy thermals-denim combo and sang with a deep voice. By the climax of the evening, models Alton Mason and Adonis Bosso; musicians Kelsey Lu, Oyinda, 070 Shake and Bryndon Cook; and as a surprise guest — Telfar himself — had joined the 11-part chorus: “I am / Grateful for the things / That you have done / Yes, I'm grateful for the victories we've won…”

Much more than a fashion show, it was a heartfelt celebration of a long-marginalised community coming into its own, eliciting a standing ovation from jaded fashion editors as well as members of Telfar’s family and local fanbase. “Telfar has always showed [his collections] in a way that brings together fashion, creativity, inclusivity and as well as heart and humour,” said Julie Gilhart, a fashion consultant who has been a longtime supporter of the brand.

The official after-party was held at designer fashion discounter Century 21. By 11 pm, hundreds of Telfar’s followers were waiting in hour-long lines to hear the bombastic sounds of Total Freedom (aka Ashland Mines) and Venus X, known for her GHE20G0TH1K parties with Hood By Air designer Shayne Oliver. But the after-after-party was held at the community’s unofficial club house: Glam, a monthly party organised at the dingy China Chalet by a collective composed of Dese Escobar, a multi-disciplinary DJ, artist and transgender nightlife impresario; Kyle Luu, stylist to Solange Knowles and Travis Scott who is also transgender; and Tiffany Luu, an Instagram influencer and Kyle’s sister. “There's gay parties and there's straight parties, but Glam is different. It brings people together on the premise that everyone who goes are just young creatives,” explained Escobar. “It's just a melting pot of New York City — tourists, people who come from the art world, from the fashion world, etcetera.”

While Alex Lopez aka DJ Bebe kept dancers gyrating to remixed hip-hop and trap beats, photographer and filmmaker Luke Gilford and Australian filmmaker Baz Luhrmann clustered near the bar, where Out of Order editor Dorian Grinspan was giving a friend a primer on Glam’s role in New York’s nightlife ecosystem. Nearby, artist, photographer and director Petra Collins was playfully hoisted from a crowded booth where she was sitting. Dara Allen, a Filipina-American transgender model who has walked the Marc Jacobs shows and has starred in a Helmut Lang campaign, chatted about her fashion week schedule, while Clemens and Babak Radboy, Telfar’s creative director, received congratulations from the Hood By Air collective.

Meanwhile, Escobar, dressed in a Telfar asymmetrical tank and Tiffany Luu in a glamorous floor-length vintage cream fur coat took turns pulling the occasional “sis” or “ateh” (a Filipino word for sister) — terms they use interchangeably for female and male (mostly gay) friends — from the melee at the club’s entrance.

Around 1:30am, Timothée Chalamet, the breakout star of Luca Guadanino’s "Call Me By Your Name," was spotted in a basketball cap happily clinking drinks with fans. In a room unfazed by celebrity sightings, the presence of Chalamet, a Hell’s Kitchen native who identifies as straight, was notable because, at 22, he has received a Best Actor Oscar nomination for his portrayal of teenage protagonist Elio Perlman, who falls in love with another man. For previous generations, a straight actor playing a gay character would have come with controversy. But these days, when sexual and gender identity is increasingly fluid, neither the Hollywood establishment nor his growing fan base seem to mind. “I think the future is genderless. I think it's sexless. It's inclusive,” said Luu.

The party finally moved to Clandestino, a dive bar on Canal Street, but as the revellers dispersed into the near dusk, the rest of America was waking up to a reality where gender fluidity is transforming culture — and inevitably how we do business — far beyond likeminded fashion labels such as Hood By Air, Vaquera, Gypsy Sport and Luar by Raul Lopez.

“Our attitude as a culture towards gender and sexuality are certainly changing,” said Phillip Picardi, chief content officer of Teen Vogue and them, Condé Nast’s newly launched LGBTQ platform. According to a J. Walter Thompson study published in Teen Vogue, 52 percent of Generation Z doesn't even identify as strictly heterosexual, and it’s clear that mainstream media and brands are now paying attention. 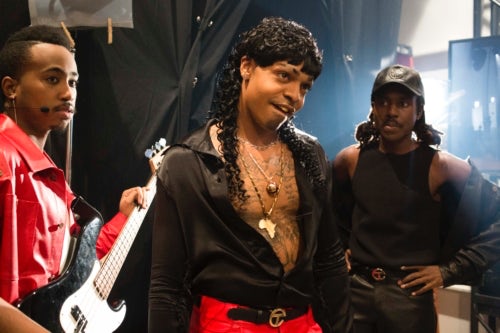 In the 2000s, before marriage equality laws, LGBTQ activism was largely focused on assimilation, explained Picardi. “Now, our entire community can shift our focus to other things like finally making room for the transgender people who our community has largely been ignoring in these movements,” he said. “It’s allowed for more individuality and more freedom of expression. It's allowed for more and more queer people to feel free to experiment with gender, rather than just being labelled gay or lesbian. It's allowed for visibility in gender in a way that hasn't been represented before. And that makes room for people like Telfar to really find success and be in the cultural zeitgeist — even though he was so ahead of his time.”

Last November, Telfar won what some say is long-overdue recognition from the CFDA Vogue Fashion Fund, earning a $400,000 cash prize as well as mentoring. The Glam collective, for their part, hosted a party for Pat McGrath and American Vogue and is working with a number of major brands, including sportswear giant Nike and an undisclosed European leather goods house. But the community, aware of its rising ‘cool’ status, is wary of being exploited.

“Some brands who approach us just honestly want to use us to make them look cool,” said Escobar. “What I find is that a lot of times, these big corporate companies, they want you to come in and work on their project that's apparently so ‘liberal’, ‘alt’, ‘LGBTQ,’” added Kyle Luu. “But then when you go in there, they water it down to a point where you're nothing. I think they really need to hear us out, and they really need to let us do ‘us’, because there's so much history and culture behind this community that they haven't learned yet.”

“I don't want to be niche. I don't want to be stuck in a category because I think we're greater than that,” said Luu. “I've followed Telfar’s career since I moved to New York. I just remember it feeling relatable back then. It was gender-fluid before gender-fluid became a trend, or a thing, or this phenomenon that happened over the past two years with brands embracing LGBTQ culture. It wasn’t a gimmick.”

“My advice to any brand is to figure out how to authentically speak to the issues,” said Gilhart. “No amount of marketing dollars will make a difference unless the language is true and transparent. And a brand can't go in lightly. The voice must be strong and backed up by authentic actions.”

As for Telfar, “The brand we're trying to build is about solidarity instead of scarcity. It's about representation instead of marketing,” said Radboy. “The politics of what we do is just baked into our existence.”