The Savigny Luxury Index (“SLI”) took a tumble this month, with the luxury sector enduring one of its worst quarters on record.
By
10 August 2020
BoF PROFESSIONAL

LONDON, United Kingdom — Knowing full well that the second quarter of 2020 would bear the brunt of the Covid-19 crisis did not help. The markets still reacted badly to the spring results announcements this month. Safilo, LVMH, Kering, Hermès, Prada, Moncler, Ferragamo, Richemont, Burberry, Brunello Cucinelli and Swatch all posted double-digit sales declines in their latest results, with the median decline for the second quarter reaching 40 to 50 percent. Rubbing salt in the wound, Moncler, Swatch and Prada reported operating losses for the first half of the year.

Companies' reassurances that things were getting better seemingly fell on deaf ears, whether it was high double-digit growth in Mainland China or triple-digit growth in e-commerce. LVMH's finance director best summarised the situation in China by making clear that domestic shopping by Chinese consumers could not offset the near absence of purchases by Chinese tourists travelling abroad. This was coupled with the fact that, despite the lift, e-commerce still only accounts for a small share of business among most luxury players. For example, Kering's e-commerce sales grew by 72 percent in the second quarter but nevertheless only accounted for 18 percent of retail sales.

Burberry is cementing its pole position in digital innovation in the luxury industry having opened its first "social retail" store in Shenzhen in partnership with Tencent. The store was developed in collaboration with a smartphone widget on WeChat and aims to integrate gaming, social media, e-commerce and white-gloved customer services that can be accessed both at home and in the store. Other brands, including Bulgari, Gucci and Louis Vuitton have also developed a presence on WeChat, which reaches over 1 billion users and some have even introduced the concept of gaming into their physical stores, via claw machines and lucky gifts. Such an approach remains the preserve of Mainland China for the moment.

The Savigny Luxury Index (“SLI”) took a tumble this month, with the luxury sector enduring one of the worst quarters on record, according to Bain & Company. The SLI fell just over 5 percent versus a near-flat performance for the MSCI.

• Prada gained over 11 percent this month as investors overcame the bloodbath of its first half results to focus on the strong rebound experienced by the company in China and online.

• Burberry's shares took a nosedive this month on the back of an almost 50 percent drop in quarterly sales, coupled with plans to cut 500 jobs. The company also has to contend with the calamitous state of Brexit negotiations. The stock lost over one fifth of its value this month.

• Hermès fell by almost 8 percent, reflecting the announcement of a first half operating margin of 21.5 percent, sharply down from reported margins closer to 35 percent in the past. Nevertheless, this month's share price decline still leaves the fabled luxury group trading at a high premium to the SLI average.

While many breathed sighs of relief as the lockdown in Europe was gradually eased, the US situation remained worrisome. Infection clusters have also started to reappear, a clear sign that the threat is still a long way from disappearing. Having counted the cost of a full lockdown on their economy, most countries will do everything in their power to manage any flare-ups of Covid-19 without going back to imposing universal lockdowns. But the risk is still there. Should this happen, the impact on consumer confidence and luxury sales could be truly devastating. 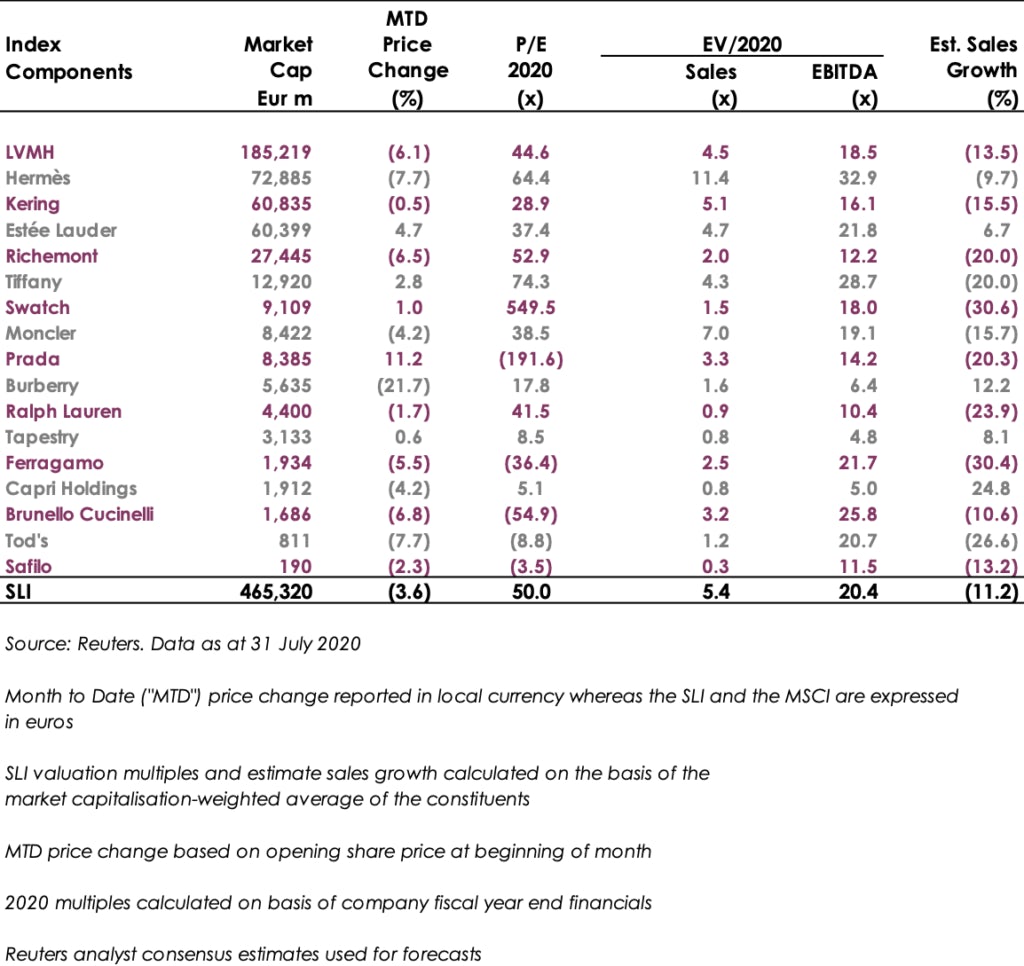 More from Financial Markets
A financial lens on the ebb and flow of the fashion sector.

The World Economic Forum in Davos, a retail convention in New York and menswear shows in Paris will command the industry’s attention. Plus, what else to watch for this week.

The owner of Lanvin, Sergio Rossi and other brands is the first fashion company to list on a US exchange in a year. But the tough economy and investor skepticism about money-losing start-ups is likely to keep others from following suit.

The Risks of Celebrity Marketing

Kanye and Adidas, Johnny Depp and Dior: celebrity marketing can be a minefield as well as a goldmine — and social media has raised the stakes.

High-end brands continue to report record sales and profits, even as mass retailers trim their outlooks for the autumn and winter. Can it last?