Strong results continued to pour in from different segments of the luxury industry: at one end, leather goods primo Hermès announced record-breaking first-half results, achieving its highest operating profit ever with a margin of 34.1 percent; at another, hard luxury leader Richemont announced a sales growth of 12 percent for the first five months of its current financial year (ended March 2018).

This seemed to confirm that the luxury watch sector has finally bottomed out, although the figure was boosted by a buyback of watch inventory in order to clear up the supply chain and prevent a grey market from developing. Whilst both companies’ results echoed the good feedback from the luxury sector in general, Hermès poured cold water on investor hopes by pointing to a looming currency issue if the euro continued to strengthen.

The apparel segment has been active this month in terms of mergers and acquisitions activity. SMCP (Sandro, Maje & Claudie Pierlot) began IPO proceedings with a view to listing by the end of the year — its main shareholder, Shangdong Rui, will reduce his stake from 82 percent to 51 percent and the company will also raise 120 million euros to refinance debt.

In maternity wear, Seraphine sold a 68 percent stake to Bridgepoint in a management buyout, valuing the company at £22 million. Elsewhere, South Korean brands continued to attract investors this month, despite rising tensions in the region, with eyewear brand Gentle Monster receiving investment from L Catterton and Carver Korea, which owns the luxury skincare brand AHC, being bought by Unilever for 2.3 billion euros.

Doing good is becoming increasingly important for luxury brands and for their consumers. The sector had been blighted in the past by stories of cruel practices both on animals (think crocodile skin and fur) and humans (working in sweatshops or walking on the catwalks).

LVMH announced that it was investing more in improving its environmental credentials, whether it be sourcing of skins or energy efficiency measures; and LVMH and Kering jointly announced the banning of size zero models, with stricter monitoring of model health and well-being.

September also marked the first Green Carpet Fashion Awards, which took place in Milan at the end of Fashion Week. The ceremony, spearheaded by eco-fashion activist Livia Firth, gave awards for innovation in supply chain, ecological credentials and the promotion of craftsmanship. 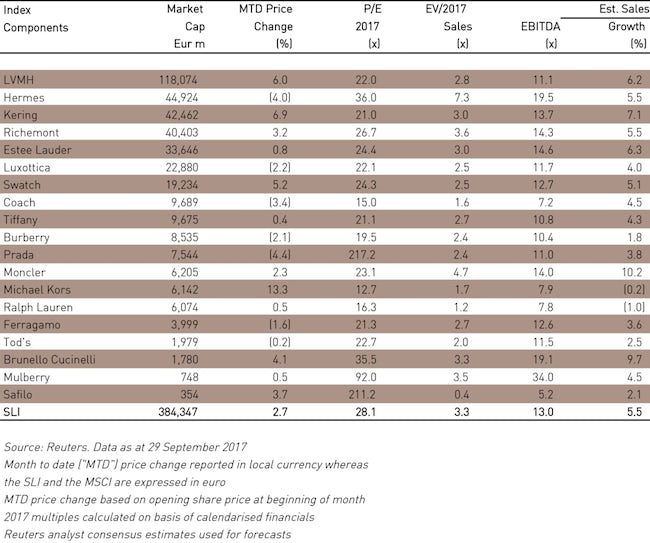