Mejuri Wants to Upend Fine Jewellery With a Drop Model

The direct-to-consumer jeweller has raised $5 million in funding in a bid to revolutionise the industry through a drop model.

LONDON, United Kingdom — The direct-to-consumer fine jewellery brand Mejuri, which embraces a drop model pioneered by the likes of streetwear label Supreme, has closed a $5 million Series A funding round, led by Felix Capital.

“The brand stood out as having been built with very little capital, which matches our investment thesis of community-led authentic consumer brands,” said Frederic Court, founder and managing partner at Felix Capital, which also invests in Farfetch, Goop and Highsnobiety. “The jewellery market is dominated by traditional players who have pursued an offline strategy. Mejuri is different because they’ve developed a strong digital community.”

The fine jewellery label — co-founded by Toronto-based Noura Sakkhija and Maj Masad in 2015 — had only raised $1 million in funding prior to this, but already counts over 250,000 engaged Instagram followers and has experienced 400 percent year-on-year growth with 150,000 units sold in the last 12 months, fuelled largely by social media and its millennial-friendly business model.

We see the drop as a key new retail model.

“We began rethinking the product introduction model and said, forget that, we’ll introduce products every single Monday,” said Sakkhija, who is also chief executive. “This means we’re constantly in conversation with the customer.”

The concept of regularly drip-feeding product in limited quantities was pioneered by the likes of Hiroshi Fujiwara and popularised by streetwear brands like Supreme, Palace and Nike, which have adopted the system at retail and online. Meuri’s 52-product release model differentiates it in a jewellery market dominated by traditional players whose output is limited to seasonal releases. By using data to work with its in-house design and technology teams, the brand can quickly see what works and what doesn’t, added Sakkhija.

“We see the drop as a key new retail model,” said Court. “Mejuri are nimble, they built a very strong supply chain behind them which allows them to iterate quickly,” continued Sasha Astafyeva, principal at Felix. “Traditional jewellery labels really lack this.” 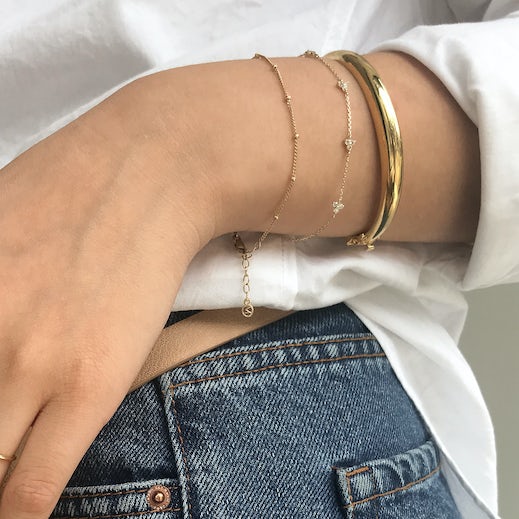 As millennials move from buying large diamonds to seeking smaller stones at lower prices, Mejuri’s price point — $155 for a solid yellow gold ring with a white sapphire and $270 for a gold necklace with a black diamond — hit the sweet spot for self-gifting and collecting, entering the demi-fine jewellery category, characterised as blurring the lines between fine jewellery and costume jewellery by offering precious stones at affordable prices.

Its retail strategy has also been unique: Sakkhija has pioneered showrooms, rather than traditional brick-and-mortar shops. “We think of it like an activation point,” she explains of the brand’s first Toronto outpost. Jewellery is displayed without glass in an interactive format and stylists are at hand to advise customers how to wear the jewellery. Meanwhile, influencers and brand representatives recruited from its legion of engaged Instagram followers serve as the best form of organic marketing.

But millennials don’t only care about newness, they are also conscious of sustainability and manufacturing, particularly in a jewellery industry plagued by negative connotations of diamond provenance. “When we onboard new suppliers we have to make sure the diamonds are certified with conflict-free certification. This is something not negotiable for us,” said Sakkhija.

Looking ahead, the executive sees physical touchpoints as a lever of growth and plans to use the new funding to expand Mejuri’s retail presence, while also growing the business and team. “Our aspiration is to be the number-one jewellery company for women and to make luxury a habit.”