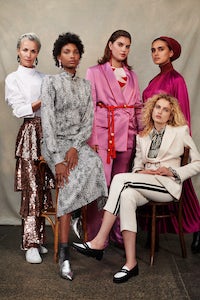 LONDON, United Kingdom — A curious thing has happened in the fashion industry over the past few years. Designers and brands across the world, from Coach and Batsheva Hay in New York to Gucci in Milan and Valentino in Paris, are producing clothing that’s often a little longer and slightly looser. It’s part of a shift in taste and preference for modest dressing among women who want to look good while respecting their religious values.

Now, ahead of its planned IPO on Friday, Farfetch is making moves into this market, inking a global partnership with modest luxury retailer The Modist.

As part of the deal, the online retailer will offer a curation of modest fashion on Farfetch as well as exclusive styles for the platform, from both The Modist’s private label Layeur and customised pieces from other brands.

Farfetch has grown into one of the biggest online luxury retailers by volume by connecting smaller retailers like The Modist to its global customer base. The marketplace plans to raise about $600 million via an IPO, which would value the company at nearly $5 billion.

But for Farfetch to maintain its torrid pace of growth — the value of goods sold through the site jumped 55 percent to $910 million last year — the company needs products that differentiate it from competitors like Net-a-Porter and MyTheresa. Those sites and others are also signing exclusive deals with independent retailers and emerging designers. There are some signs this strategy is paying off for Farfetch, which said in a regulatory filing its acquisition costs per customer were going down, while shoppers were spending more on the site.

The Modist’s clothes, with their special appeal to Muslim women, fit neatly with Farfetch’s aggressive expansion plans in the Middle East. In January, the marketplace signed a partnership with Chalhoub Group, one of the biggest distributors of fashion and luxury goods in the region. At the time, Farfetch founder and chief executive José Neves said the Middle East was a “big gap in our strategy” and that quickly growing sales there “is of great strategic importance.”

“This will enable us to bring our understanding of modesty as well as the market and consumers together with Farfetch’s global reach,” said Ghizlan Guenez, founder and chief executive of The Modist.

While modest dresses are trending in New York and Europe, the real growth is expected to come from the Muslim world, where for religious or cultural reasons many women wear outfits that cover their bodies: Muslim expenditure on fashion is set to rise from $243 billion in 2015 to $368 billion by 2021, according to Thomson Reuters.

These women, along with conservative Jews and Christians, are a largely untapped market, as many brands cater to a mainstream that still prefers tighter, skin-baring clothes, said Shelina Janmohamid, vice president at Islamic consulting agency Ogilvy Noor. “These female consumers have unmet needs and money to spend,” she said.

While the luxury e-commerce market in the Middle East is still young, some say Farfetch is late to the game. Yoox Net-a-Porter struck a joint venture with tycoon Mohamed Alabbar, founder of Emaar Properties and Emaar Malls, which owns The Dubai Mall, in 2016. There are also larger, local e-commerce sites like Lazada and Tokopedia, which sell a broad range of general items but also have their own Muslim fashion sectors, and emerging retailers like Hijabenka, Hijup and Muslimarket that cater to the market.

Farfetch sees appeal for Modist’s clothes beyond the Middle East, however. In Western markets, there has also been a shift towards styles that cover more of the body. “Wide leg trousers, high necks, mid dresses, kaftans and long, billowing sleeves are now wardrobe staples in Europe and America,” said Florence Allday, beauty and fashion associate at Euromonitor.

“Modest dressing has grown from a market-specific trend to an increasingly global one,” said Edward Sabbagh, managing director of Middle East at Farfetch. “We have a sophisticated customer who is looking for special pieces that fit into this lifestyle.”

Halima Aden: 'Modesty Is Not Just for Muslim Women'