TBILISI, Georgia — When one thinks of Georgian fashion, the person that immediately comes to mind is Demna Gvasalia, whose roles at Vetements and Balenciaga opened the world’s eyes to the country’s emerging fashion scene. But ask anyone in Georgia’s tight-knit fashion community whether Gvasalia played that big of a role, and they’ll shrug and point instead to Sofia Tchkonia, the under-the-radar founder of Mercedes-Benz Fashion Week Tbilisi.

“Sofia is involved in everything,” says Lalo Dolidze, the designer behind namesake knitwear label Lalo. “She sent out line sheets and lookbooks to press, tells guests to come to fashion week. Even outside of the fashion week schedule – she’s a permanent [fixture],” adding that she doesn’t feel the need to show at Paris or London now because important international guests also attend MBFW Tbilisi.

Before Gvasalia made it big, Georgia had its fair share of well-known designers during the aughts — take David Koma, whose brand of eveningwear was popular among wealthy Londoners and New Yorkers, or Lalo which had international distribution since 2011. But only after Tchkonia founded MBFW Tbilisi in 2014, did young names start to gain traction.

Tchkonia, a striking woman who cuts a glamorous figure, leveraged her growing networks in Paris, New York and London for the nascent event. Soon, a wave of prominent international guests — from editors-in-chief of international editions of Vogue to buyers from Net-a-Porter and Moda Operandi — began flying into this tiny but ancient country sandwiched between Russia, Turkey and small neighbours buttressing it from Iran.

Yet Tchkonia is the first to give credit where it is due. “Demna was certainly an ambassador,” she says. After Vetements’ early aesthetic went viral, Gvasalia took on the role of a creative envoy. By 2015, when he took the reins at Balenciaga, Georgia was firmly on the world fashion map, and its designers had more international exposure than ever before. 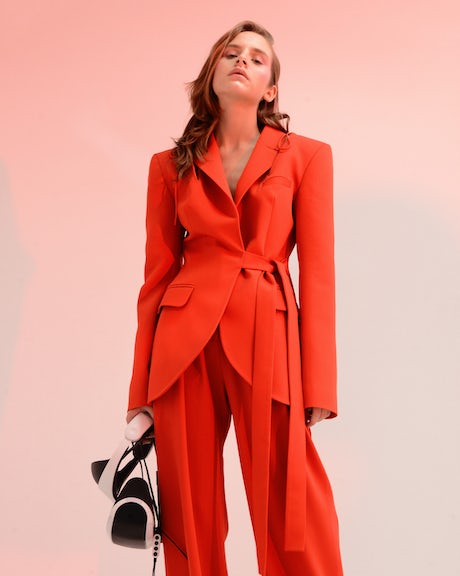 Gvasalia’s own rise was aided by the fact that many in the industry became fascinated with post-Soviet youth culture, which was ushered in by a wave of Eastern European creatives like Lotta Volkova and Gosha Rubchinskiy using local castings and imagery.

“The way he’s showing Georgia and the problems within the country… For many years Georgian journalists and the government couldn’t achieve this. He did it with one [fashion] show,” adds Tchkonia.

Gvasalia’s Spring/Summer 2019 collection featured symbols denoting everything from the drug raids at night clubs Bassiani and Cafe Gallery, to Sukhumi, the capital of the breakaway region of Abkhazia, from which Gvasalia fled in the early 1990s. He even launched an app to teach the country’s history.

But, she adds, “I don’t think that it’s only Demna now… If people came and didn’t like what they see here, they would never have come back [so] it’s also down to our designers’ hard work.”

As a handful of designers and entrepreneurs began to make a name for themselves, Tchkonia was gathering momentum to push “Brand Georgia” forward as a collective fashion movement and nurture a new generation.

“She is the one that supported those designers when nobody gave a damn,” says fashion blogger and critic Diane Pernet, who has attended the fashion week since its founding. “She pushed and invested in it, helping designers setting up their ateliers and trying to manage them. They weren’t manageable before.”

Tchkonia has held a local design contest, BeNext, since 2010 — a project she took on from her mother, and one that many of the designers showing on-schedule have participated in, including George Keburia and Aleksandre Akhalkatsishvili, one half of the duo behind local brand Matériel. Before that, she was involved in the film industry with her own series of documentaries interviewing the likes of Pierre Bergé, Rick Owens and Claude Montana.

I don’t think that it’s only Demna now… If people came and didn’t like what they see here, they would never have come back.

“I saw so many talented designers [during this contest],” said Tchkonia. “They didn’t have a platform in their home country, because they couldn’t go to Paris, London or New York, nobody wanted them there [back then].”

So she launched fashion week with no backing. “She probably felt pity for us because we had no platform in terms of design,” laughs Keburia.

Even now, when Tchkonia sees a fashion school graduate with potential, she says she sometimes invests in them. Over 60 percent of the investment in the fashion week comes from her own pocket, and now, “I spent all the money that I had on this project,” she concludes.

Locals probably see Tchkonia more as a passionate benefactor than a savvy investor, but she is quietly banking on another Georgian or two making it big like Gvasalia.

And while other private investment is scarce, the government is starting to take notice. The last cycle of elections brought in a set of young, modern ministers and government officials — among them Tatia Bidzinashvili, head of creative industry development, the entity that began sponsoring Tchkonia’s fashion week in its second season. It also finances some local designers’ participation in global trade shows.

Bidzinashvili is pushing for the development of the creative industries in the country on the grounds that it brings in tourism — and is, of course, good for business in its own right. “Designers used to make products under the motivation to sell to smaller shops,” she says. “It used to be just for fun [but] now they realise it’s a real business, so they’re motivated to have high-quality standards for buyers.” 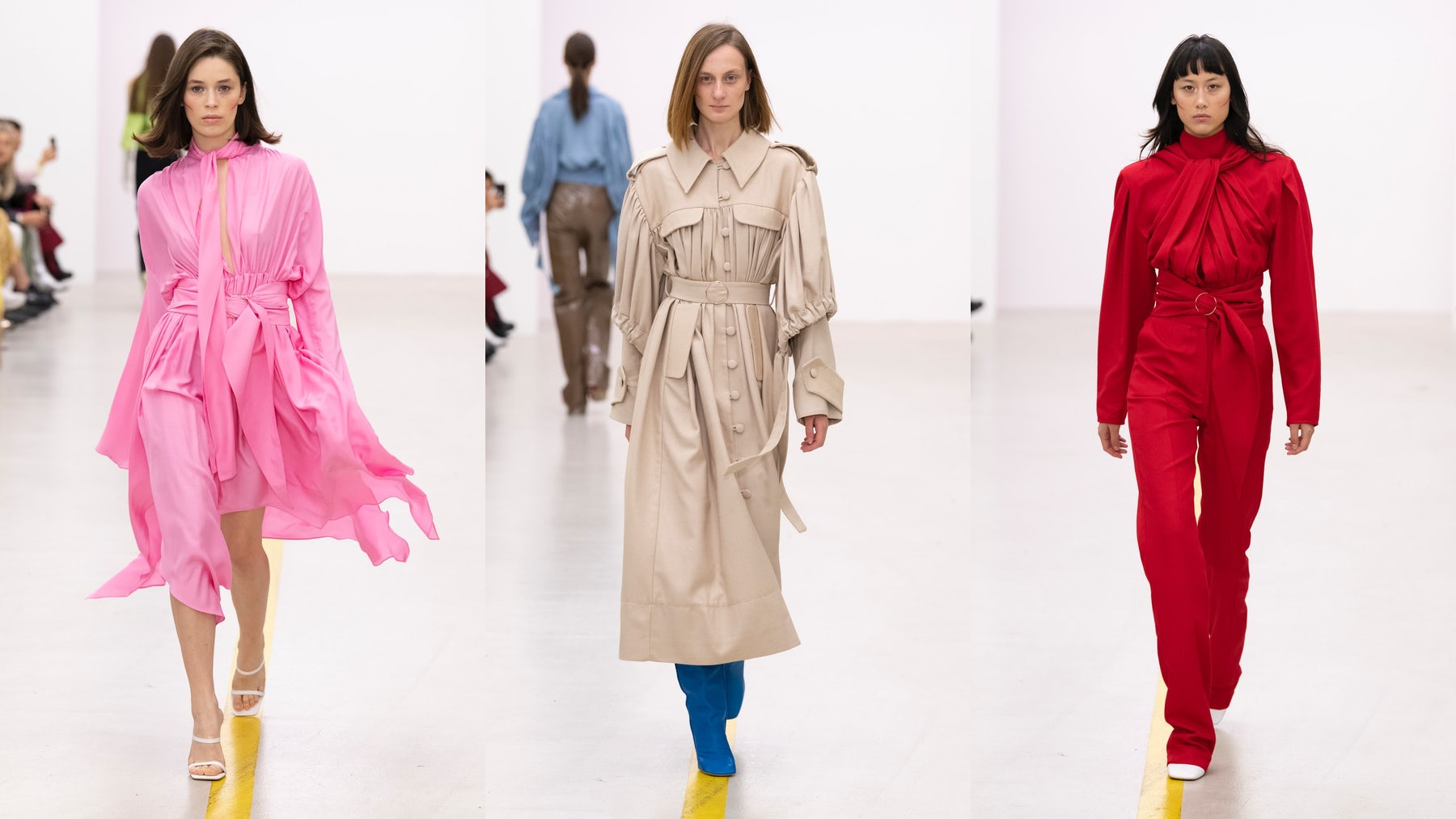 George Keburia, whose designs have been worn by the likes of Rihanna and Gigi Hadid, highlights Enterprise Georgia — the governmental arm that finances trade shows – as another source of funding. “It’s a good incentive, because no one took the industry seriously so there wasn’t much support,” he says.

While designers are receiving more and more support, Tchkonia is still missing a significant chunk of investment to keep the biannual fashion week running. Mercedes-Benz only provides the name — she rents out the cars for press herself — while the government’s contribution is minor, even though Bidzinashvili states it’s set to increase in the coming years thanks to strong performance by the sector.

“Sales of Georgian designers tripled in a year, so we’ve proven that the supporting elements have worked well and are planning on investing more,” Bidzinashvili says.

Feedback from international buyers did help raise local designers’ clothing to international quality standards, but production and manufacturing facilities are still lacking. “We’re forced to import all of our materials and to look for production facilities outside Georgia,” said Lado Bokuchava, whose namesake label is stocked on Moda Operandi. Keburia contends it would be good to “develop manufacturing, textiles, raw materials and a professional workforce for sewing.”

One Georgian fashion brand with an advantage over most is Matériel, which began in 1949 as the biggest factory in the USSR for women’s ready-to-wear, but in 2012 rebranded as a high-end luxury label under different designers. The fashion house has become somewhat of an incubator, having had George Keburia, Aleksandre Akhalkatsishvili and Lado Bokuchava as creative directors, all of whom went on to open successful fashion labels of their own.

They realise it’s a real business, so they’re motivated to have high-quality standards for buyers.

“That was the goal, to be an incubator,” says brand manager Rusa Janashia. “When it started, there was nothing going on in Tbilisi, and it was [a] big [deal] to create a house employing Georgian designers. What Matériel does is give a platform to [them], help them grow and launch their own businesses.”

The brand’s revenue grew from €250,000 (about $280,000) in 2018 to a projected €1.5 million for 2019 ($1.68 million), and it counts Browns and Moda Operandi as stockists. It has also expanded its micro-empire to concept store Dots, which re-uses the fabrics and styles not used at Matériel at a lower and more accessible price point.

In the future, Janashia hopes to create a designer collective — similar to the business model of many of today’s streetwear brands, where a group of designers create collections – and become somewhat of a local fashion school, something still missing from the Georgian design scene. Until now, most of the leading designers have attended a non-specialist fashion school called Tbilisi State Academy of Arts.

Despite the many gaps in Georgia’s fashion ecosystem and the many challenges that Tchkonia and local designers face, the Georgian fraternity continues to inspire international buyers and gain modest but significant commercial traction. Clearly, many are hungry to develop a successful business or at least see their name in lights, but in a small struggling nation such as this, there are other issues to consider.

“It’s important for the city, for the country, for these designers to be the best ambassadors for Georgia they can,” says Tchkonia.