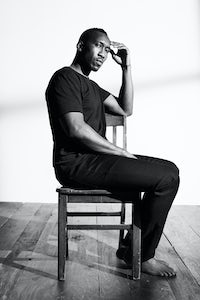 Timing is on the side of Calvin Klein chief creative officer Raf Simons and creative director Pieter Mulier.

In a couldn't-be-orchestrated-better turn of events, the New York-based brand has released its Spring 2017 men's underwear campaign featuring four actors from the film "Moonlight," which won Best Picture at Sunday's 89th Academy Awards in what was somewhat of a surprise upset. (As well documented in entertainment news, the Oscar was accidentally given to "La La Land" first, only to be rightfully passed to director Barry Jenkins and his cast.)

Mahershala Ali, Alex Hibbert, Ashton Sanders and Trevante Rhodes star in the 10-image, black-and-white series, captured by photographer Willy Vanderperre and styled by Olivier Rizzo. Aptly titled "Revelation," Simons said in a release that the campaign is "an acknowledgement of remarkable actors who are revealing something important of being a man today in what they do."

Hibbert, Sanders and Rhodes, along with co-star Naomie Harris, also wore Calvin Klein to Sunday's ceremony. With the introduction of this campaign via Instagram, Simons and Mulier have once again proven that that they are committed to re-wiring the Calvin Klein marketing machine. What will they tune up next? — Lauren Sherman

Rebekka Bay, the woman once tasked with saving the Gap, now exits Everlane and joins the board of Marimekko.

Less than two years into her tenure as head of product and design at Everlane, Rebekka Bay is exiting the San Francisco-based startup, according to founder and chief executive Michael Preysman. The news of her departure was announced internally on Monday.

"I had a wonderful experience with Michael and the Everlane team, and look forward to watching them continue to grow their incredible brand," Bay said in a statement to BoF.

Bay, who is Danish, will join Marimekko's board of directors, supporting its design and production development team while it searches for a new creative director. In his statement, Preysman said that he was "grateful for her time at the company," and that he wishes her "all the best in the future."

The designer, whose team was based in New York, was Everlane's first star hire, joining the company from Gap where she led one of many failed attempts to re-invigorate the iconic mall retailer. In many ways, Everlane's focus on elevated basics has made it a modern, more iterative answer to Gap.

Bay, who made her name launching COS, H&M's upmarket shrine to minimalism, brought a bit of a fashion edge to Everlane's offerings. However, the company's most successful initiative during her time there, at least from a marketing perspective, appeared to be its 100% Human campaign and t-shirt line, which underscored its mission-driven ethos.

In March 2016, reports surfaced that Everlane was seeking investment at a valuation "north of $250 million." At the time, according to tech-trade site Recode, the company's total funding amounted to $18 million.

A replacement for Bay has yet to be announced. — Lauren Sherman

Even though she has lived in New York City for eight years, Sofía Sanchez de Betak is at home on the go. And now the Argentinian fashion consultant, art director, model, runway show front row regular and social media influencer is turning her love of travel into her own line of fashion and accessories. Chufy, named after her nickname, will launch at a Bergdorf Goodman pop-up on June 1.

The brand is an evolution of her work with Argentinian artisans over the past four years, with which she’s collaborated on pieces for the US and European market and also sold through her own site. Now she’s taking that approach to more of her favourite regions around the world, which will individually be the focus of each forthcoming collection, and where she will work with artisans to put her twist on handmade local classics and special finds.

“I don’t think traveling is just showing up to a country with a guidebook — so I make calls, I meet people, I make friends and somehow it ends up happening that I find — probably by the end of the trip — the right partners,” said Sanchez de Betak, adding that she sees her role as creative director more than fashion designer.

The debut Chufy collection, ranging in price from $200 to $1500, is all a product of Argentina and will land at Colette in Paris a week after its New York launch. “We are keeping it small and exclusive in the beginning because it’s many vendors,” she said. “I don’t see it as a trend thing or a fashion line in terms of summer winter autumn. I want it to be timeless and that’s how I feel about my gaucho pants and my boots… It’s more [about] a state of mind or a lifestyle than a season.” — Chantal Fernandez

Editor's Note: This article was updated on February 28 2017 to reflect Bay's appointment to the Marimekko board.