LONDON, United Kingdom — Belting a song into a microphone; taking a mug shot after a bank robbery; flying high over the city like a superhero, cape billowing in the wind. These are just some of the things a bull terrier named Jimmy Choo gets up to in the course of a typical day, as rendered by the dog’s owner, Brazilian artist Rafael Mantesso, who made his beloved pup the subject of his work following a divorce that left him with an empty, furniture-less house — and Jimmy Choo. Over time, Mantesso began filling the blank white walls of his home with tongue-in-cheek illustrations, photographing the terrier against the backdrop of these images in comical poses: resting on the sofa with a martini by his side, or DJing on a pair of turntables.

News of the work soon reached Sandra Choi, creative director of luxury footwear and accessories brand Jimmy Choo, after whom the dog was named. “I had friends all over the world telling me about this Jimmy Choo dog and sending me links to [Mantesso’s] work,” said Choi. “His illustrations are so instant and spontaneous; I was instantly charmed.”

Enchanted by Mantesso’s whimsical drawings, Choi designed a capsule collection for pre-fall 2015 in collaboration with the artist. Importantly, the collection features no shoes. Indeed, Choi was adamant not to include footwear in the collection, instead printing Mantesso’s work on tote bags, cosmetic pouches, purses and iPhone cases. “Just like humour, you can’t force it. An illustration on a pair of shoes didn’t work in my head.” 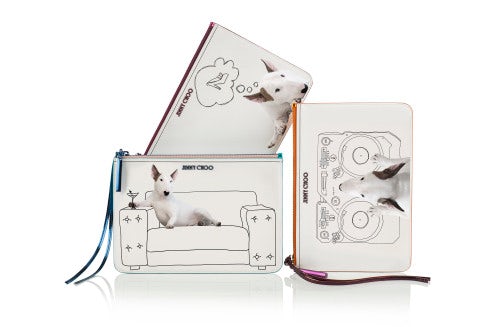 This isn’t the first time that Choi has harnessed humour in her designs. “If you say Jimmy Choo, most people immediately think of glamorous high-heeled shoes, but we can certainly be witty as well,” she said. “If you look at the cruise collection in store now, we’ve taken our classic Candy bag and put a goldfish print on it. The goldfish is facing towards you, but if you turn the bag around, it faces away. That makes it fun! We also did a pair of shoes back in 2010 called Zap, with built-in batteries and a light bulb. When you step into the shoes, you hit a switch and the shoes would automatically light up.” The shoes were worn by pop star Katy Perry at the ASCAP awards in Los Angeles, creating a media sensation.

“Humour makes a difference to the monotony of what is already out there. And it’s something you wouldn’t expect from a luxury brand,” said Choi. “That’s what makes it surprising, because people have this preconception that luxury is just meant to be serious and perfect.”

Indeed, in a sea of ‘oh so serious’ brands, embracing humour, wit and theatrical extravagance can certainly make for a powerful communications strategy — as well as a means of commentary and critique. Anya Hindmarch, for one, sparked a small revolution, back in 2007, with her “I’m Not a Plastic Bag” tote bag, using wit to reframe the idea of shopping with re-usable bags. 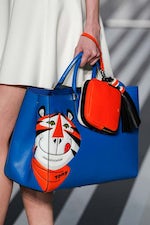 “Consumers are responding well to the lighter side of fashion, perhaps because there is a sense of [childhood] nostalgia of not being so serious all the time,” said Hindmarch, who, last year, created bags emblazoned with Tony The Tiger, the mascot for Kellogg’s Frosties, a breakfast cereal. Although the brand declined to reveal figures, a spokesperson for the company said: “The humour-inspired pieces always sell out the moment they hit the shop floor. Barneys [New York] sold out a few days after launch. We still find ourselves replenishing stock several times within each season!”

The brand’s Autumn/Winter 2015 collection, styled by Charlotte Stockdale, features leather clutches and tote bags stamped with playful roadwork signs reading ‘No U Turn’ and ‘Slow Down.’ “We have a story and inspiration which changes seasonally, but wit has always been at the heart of what we do. It’s part of our brand DNA,” said Hindmarch. 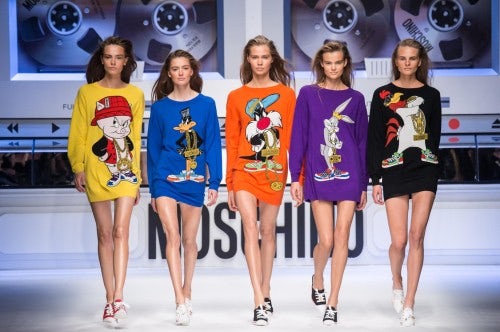 “I think a message delivered with humour is more effective than one without,” said Jeremy Scott, creative director of Italian label Moschino, whose collections consistently contain rebellion and insolence. Scott’s ability to fuse elements of ordinary life with high fashion has set him apart from his contemporaries, with designs that playfully reference American pop-culture characters like Barbie, Spongebob, Sylvester, Daffy, Bugs Bunny and the Tasmanian Devil. “Fashion should be an escapism and that push comes from the fantasy and desire to have something that is new and unique,” he added.

“Fashion, like art, is a form of expression and doesn’t always have to be so sober. You can still be elegant and have a sense of humour,” said Charlotte Dellal of British footwear brand Charlotte Olympia. The designer has also embraced the lighter side of fashion with her quirky Dolly platforms and Kitty flats, which were so successful that they spawned a childrenswear line. 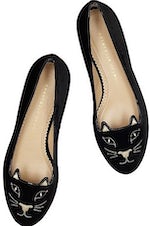 French accessories designer Olympia Le Tan has also used a wink and a nudge to resonate with consumers, wrapping clutch bags with comically rendered covers of classic novels, including Charlotte Bronte’s Jane Eyre, Vladmir Nabokov’s Lolita, Harper Lee’s To Kill A Mockingbird and J.D. Salinger’s The Catcher in the Rye.

“I’m quite a funny person so I like to bring that into my work,” said Le Tan, whose idiosyncratic bags have been carried on the red carpet by Michelle Williams (The Catcher in the Rye), Natalie Portman (Lolita), Chloë Sevigny (Moby Dick) and Tilda Swinton (Ant and Bee by Angela Banner). “When designing my pieces, I always hope they’ll amuse others as much as they amuse me. There are already so many other things we have to be serious about,” Le Tan added.