The aftermath of the terrorist attacks in Paris and Brussels weighed heavily on the sector’s first quarter results as tourist flows to Europe dropped.

Results announcements have been more glum than glam this month. LVMH set the tone with flat growth in its fashion and leather goods division, driven by a slump in tourist flows to Paris post terror attacks, compounded by weakness in Asia ex-Japan. This was echoed by Prada, Burberry and privately-owned Versace, who also confirmed that 2016 was proving to be a challenge. Luxottica highlighted additional challenges in the USA, where tourist spend is still low. To add insult to injury, retail tax-refund services company Global Blue announced that spending by Chinese tourists fell 24 percent in March, leading to the worst ever monthly result for the luxury goods industry’s tourist sales.

There were some pockets of good news in leather goods. Hermès continued to impress at the top end. At the more affordable end, Coach seemed to be turning around and finally clawing back some market share, whilst privately-owned MCM, proving that logos still have a space in the market, disclosed 15 percent sales growth in 2015 and forecasted 20 percent growth for the current calendar year.

The game of musical chairs in creative direction continued this month with Hedi Slimane leaving Saint Laurent to be replaced by Anthony Vaccarello, who comes from Versace. The fashion calendar’s shake-up also continued with Gucci announcing that it would merge its menswear and womenswear shows in an effort to streamline its show efforts.

Corporate activity ground to a halt in April although at the time of print, Farfetch announced a further fundraise of $110 million purportedly at a $1.5 billion valuation. The funds will be used to expand the company’s technology platform and increase its presence in Asia. 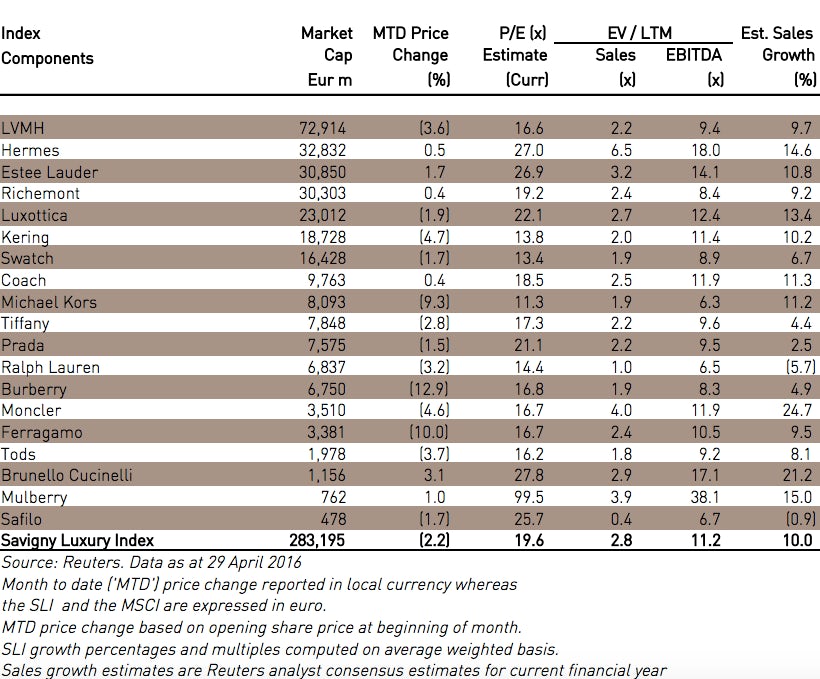