The designer’s task at Burberry has been to create a strong new identity for the brand. His latest collection, infused by life under the ocean, highlighted just how tricky that challenge is.

The designer’s task at Burberry has been to create a strong new identity for the brand. His latest collection, infused by life under the ocean, highlighted just how tricky that challenge is.

LONDON, United Kingdom — Riccardo Tisci is clearly attracted to a particular kind of strong, powerful woman. He credits his mother, now 94, and his eight sisters. He never knew his father. Then there are his famous friends. One constant has been the formidable Marina Abramović, who practices something called endurance art, a species of performance art which generally involves pain and/or solitude and isolation and the passage of time…lots of time.

But the endurance artist who has truly captured the popular imagination in recent years with her performance pieces at prestigious venues such as the Venice Biennale and the Tate Modern is 42-year-old Anne Imhof. Those were profoundly confrontational, occasionally violent, and intensely sexual succès de scandale. What they weren’t was anything particularly Burberry, at least as the world understood the brand. Until Thursday, when Imhof collaborated with Tisci on his Spring/Summer 2021 show in a forest in Buckinghamshire, a little more than an hour outside London. Tisci admitted the incongruity with a hearty laugh, then said dryly, “Burberry is committed to changes.”

The pandemic imposed the biggest of those changes. The show was audience-free (also disconcertingly mask-free), and streamed across multiple digital platforms. I watched on Twitch. The experience wasn’t as satisfying as I had hoped it would be. The collection itself came and went with the barest acknowledgement from the cameramen, the models filing in to line the circular metal cage that had been deposited amidst the trees. The focus seemed more on the artist, musician and Imhof muse Eliza Douglas who performed a drawn-out guitar piece. Words emerged from the electronic murk: “same old ways”, “things you can’t escape”, “forever stuck inside”, “eternal loops”, “same routine”, “never-ending way every time…” Sensations many people may have felt during lockdown, but not quite reflective of Tisci’s claim that Douglas was singing about “the young generation, hopeful for freedom and a better future.” 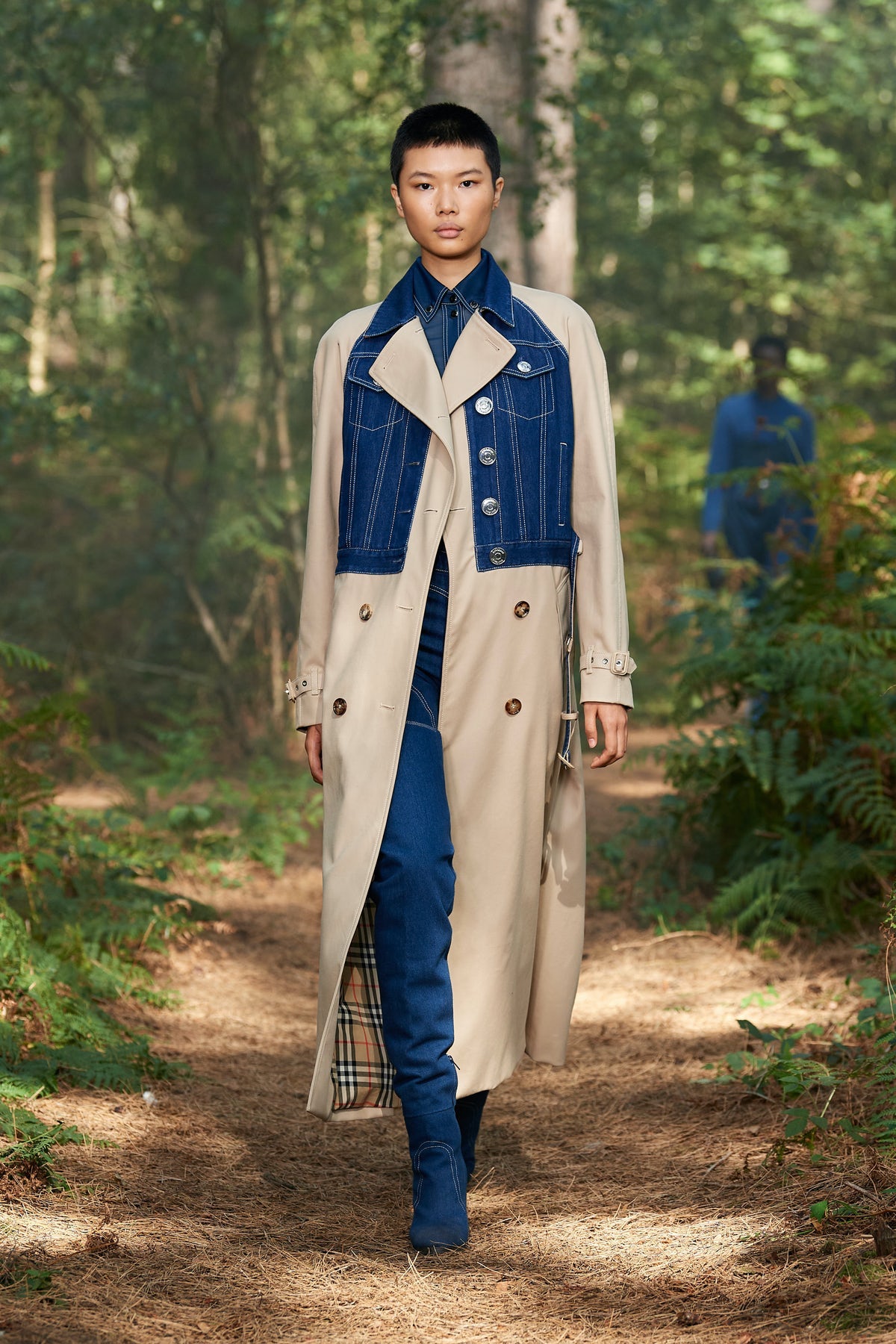 That kind of droll disconnect characterised the event, including the collection itself. It was called “In Bloom,” paying homage to summertime, regeneration, the circle of life (hence the cage). Tisci said that one thing he and Imhof shared was a deep love of nature. Also, obsessions with animals, religion and sex. She and Eliza were also, he said, obsessed with the Burberry trench. They wore theirs very over-sized, very masculine, very cool. Observing the iconic coat’s pioneering water-repellent properties, Imhof’s original choice of show location was a beach. That made sense with the collection’s narrative, the love story between a shark and a mermaid. Tisci was struck by the beautiful children they might have, the shark with his strength and confidence, the mermaid with her dreamy romanticism. “That’s what my style is about.”

The flavour of life on — and under — the ocean waves infused the clothes. “Blue is the new beige,” said Tisci. There was a cartoon-y scribbled graphic, as though a child had drawn sharks and mermaids. There were more complex and detailed designs, like an old mariner’s tattoos or the etchings on scrimshaw, and there were the serpentine coils of a sea monster coiling round Mariacarla Boscono’s sleeveless trench. The silver scales of a mermaid’s tail were mirrored in mesh dresses, and in the suggestion of an inner skin on some looks. Crystal-studded fishing nets were laid over others. There were more striking nautical echoes: a lighthouse, watched over by a single Sauron-like eye made me think of Robert Pattinson’s recent haunted(light)house movie. And there was some truly spectacular orange menswear, inspired by the all-weather gear of men who go down to the sea in ships.

But we were watching all of this in ye olde English forest, because somewhere in her reverence for nature, Imhof had decided wood spoke more deeply to her love of nature than sand. True, the notion of the secret circle deep in the woods had a certain druidic, pagan resonance. And it worked for Tisci. He saw the models parading through the trees in his collection as kids at a summer concert. When Imhof’s acolytes had a momentary choreographed pile-on, it was like those same kids moshing.

Tisci spent lockdown at home in Italy with his family. It tested his innate optimism. His mum went through the Second World War. “At least in war, if there was an aeroplane, we knew to run under the house,” she told him. “But now, what do I fight?” He found himself reflecting on all those freedoms he took for granted: go to the gym whenever, meet friends for pizza, go to the park, always free. And then, everything stopped. Tisci worked on the collection on his own, no team. Like couture, he said. Every outfit separate. “The procedure was very slow.”

Concentrated too: half the looks of his last show, eliminating the tension between salon and street that has characterised previous collections. And in his concentration, he became convinced that what people will want to buy from fashion is a strong and authentic identity, especially after the confusion of the past decade. “Something is changing in fashion. The new stuff I’ve been seeing recently is much more exciting than the last ten years. Once, the young generation always had to be the new this or the new that. It’s not important to say that anymore. Now, the young generation want to be themselves.”

Tisci’s challenge at Burberry has been to create a strong new identity for the brand after years of sameness. This collection, and its schizo presentation, highlighted just how tricky that challenge is. He could chuckle about the incongruity of Anne Imhof’s contribution. It’s not as easy to shrug off the incongruity between Burberry’s heritage and Tisci’s vision for its future.