The difference in price for a men's and women's striped sweater by Saint Laurent | Illustration: Paul Price for BoF
Luxury
Share
7 Comments
By Kate Abnett March 23, 2016 18:41

LONDON, United Kingdom — Comparing the price of similar items as listed in the e-commerce stores of Saint Laurent, Valentino, Gucci, Dolce & Gabbana, Balmain and Alexander Wang, BoF found seventeen instances where the male and female versions of a style had different prices. In most of these cases, the women’s was more expensive than the men’s version, with women being charged up to $1,000 more.

Of the brands surveyed by BoF, Saint Laurent has the most price differentials between similar men’s and women’s styles — eight in all. These include a striped sweater priced at $950 for men and $1,190 for women and a black short-sleeved silk t-shirt costing $490 for men and $590 for women. (In both cases, the men’s and women’s versions have the same design, colour and materials composition.)

Other examples include a Valentino sweatshirt with embroidered butterflies, costing $2,450 for a men’s version and $3,290 for a women’s — a difference of $840 — and Gucci’s rhombus print silk shirt, priced at $1,100 for men, compared to $1,390 for women (although the women’s version comes with a ribbon necktie). A Balmain men’s linen tank top is priced at $295, while the women’s version costs $365 and a white cotton t-shirt by Dolce & Gabbana comes in at $265 for men and $295 for women. 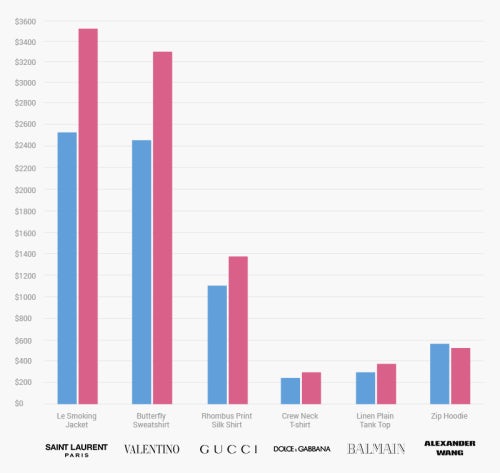 In recent months, the “pink tax” — the idea that the women’s version of a product costs more than the men’s version — has sparked outcry among consumers. Last month, Boots, a UK pharmacy chain, revised the prices on some products after shoppers launched an online petition over the price of items including razors, which cost £2.29 ($3.19) for a pack of eight for women, compared to £1.49 ($2.11) for a pack of 10 for men.

A study released in December by the New York City Department of Consumer Affairs compared the male and female versions of nearly 800 products on sale in the city — including jeans, shampoo and children’s toys — and found that, on average, the female items cost 7 percent more. On average, women paid 8 percent more than men for similar items of clothing.

The reasons for the “pink tax” in fashion aren’t clear. Valentino and Gucci declined to comment for this article. Balmain did not respond to BoF’s request for comment. However, Saint Laurent explained to BoF that the company’s policy is to align the prices of its women’s and men’s collections, but price differences still occur because most of its women’s garments require more workmanship than its men’s.

Alexander Wang was the only brand whose men’s items were, on the whole, slightly more expensive then similar women’s styles: the brand's zip hoodie with seamless pockets costs $575 for men, compared to $550 for women. According to the company, this difference occurs when the amount of fabric required to make the men’s garment is greater.

Indeed, there are some logical reasons why men and women may be charged different prices for items — even when those items look the same. But do they fully account for the “pink tax”?

Some women’s garments, particularly at the luxury level, require more intricate handiwork, fabrics or embellishment than men’s, incurring higher costs in materials and manufacturing. Patricia Stensrud is the principal of Hudson River Partners, a New York-based investment and advisory firm, and has held leadership positions such as US president of Tommy Hilfiger women’s sportswear: “The costs of these special features often have to be amortised somewhat over the entire line,” she says, in order to soften the retail price for the most complex garments.

A brand may also produce more sizes, colours and variations of items in its women’s range compared to its men’s. “That creates two levels of risk,” explains Stensrud. First, more variety means dividing manufacturing into smaller production runs, which is less economical. Second, more products can lead to higher prices on those items, in order to “offset higher markdown risks because you have more SKUs [stock keeping units],” she says. “It’s possible that someone planning the profitability of a line would make those adjustments across the board, to cover whatever that financial risk is.”

According to Michael Cone, a New York-based trade lawyer who has covered gender pricing for 17 years, the challenge is working out where in a brand’s supply chain the “pink tax” is added — and whether the brand or its factories are responsible. “Unfortunately, we don’t have the entire answer,” he says. “We don’t have internal accounting spreadsheets for the factories, for the importers, for anybody else.”

In luxury fashion, the price of a product may be based on factors beyond the cost of actually making the garment — including brand positioning, or the status of a particular product. For example, Yves Saint Laurent’s iconic Le Smoking jacket was a revolutionary womenswear garment when it was originally designed in the 1960s, and remains synonymous with the fashion house today. The brand’s men’s Le Smoking, while identical to look at, does not carry this cultural significance. Such differences may impact the price of the style, which is $2,550 for men and $3,550 for women, a difference of $1,000.

“So much of it is psychological — that pricing is really a way to create desire or raise the stature of a brand or product,” says Kit Yarrow, consumer psychologist and Professor Emerita at Golden Gate University. “There may occasionally be price inflation, if pricing is a way to establish the value of a product, especially with luxury brands.” 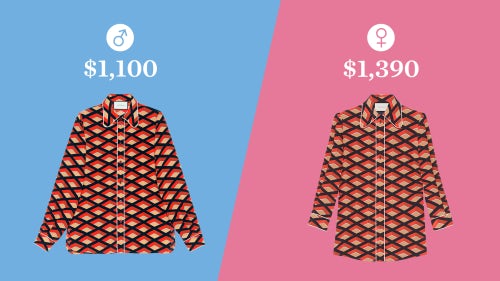 Some put the “pink tax” down to “demand pricing” — the fact that women shop more and are willing to pay more for fashion than men, so brands charge them more. Indeed, today the global market for womenswear is worth $638.8 billion — significantly more than the $417.3 billion menswear market, according to Euromonitor.

“It’s discriminatory pricing that is the issue,” says Michael Cone. “Over and over again, prices for women’s goods and services are higher than goods and services for men even though the service or the good looks to be materially the same.”

“Women do think that there’s an absolute association between price and the quality of the product they’re buying, and men less so,” adds Yarrow. Female consumers, she says, splurge more than men, whose shopping behaviour is more value-driven.

“For sure, women’s fashions are much more competitive than men’s and it does take greater effort to promote your products in that arena,” adds Yarrow. “But a $100 difference in a t-shirt? Nothing makes sense to me in that except for opportunism.”

The so-called “pink tax” may also be the result of an actual tax. In the US and EU, tariffs on certain categories of manufactured goods depend on the gender of the intended consumer, meaning different tariff rates can be applied to men’s and women’s items. In 2014, 86 percent of US apparel imports were gender-classified by the US International Trade Commission. 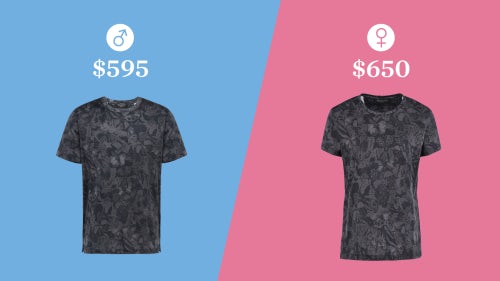 A 2015 study by the Mosbacher Institute for Trade, Economics and Public Policy at the Bush School, found that in the US, on average, the tariff rate on imported womenswear is 15.1 percent, while the tariff on menswear is 11.9 percent. According to the research, the tariff on women’s silk shirts is six times higher than the tariff on men’s silk shirts, while some men’s items, such as swimwear, faced higher tariffs than women’s. (The gap is not always reflected at retail: the New York City Department of Consumer Affairs study found that women’s cotton shirts cost more than men’s cotton shirts, despite the fact that men’s cotton shirts have higher import tariffs duties than women’s.)

“There are a couple of reasons why prices are different between men’s and women’s. One is textbook price discrimination... That’s not a policy concern. But the other is the tax differential,” says Dr Lori Taylor, director of the Mosbacher Institute and co-author of the report. “That is fixable and it should be fixed.”

According to Michael Cone, gender-based tariffs can be traced back to the 1830s, but he says there is no documentation of why these differences occurred. “Back then, no one thought about that as a potential violation,” he says, pointing out that gender only became a suspect classification for discrimination under the Equal Protection Clause in the US in the 1970s.

Because tariffs are factored into the cost of goods before they go on sale in stores, “Most people have no idea that it’s even out there,” he adds. “But think of it this way: You and I are standing in line to buy shoes. You pay a price and then there’s a sales tax of 10 percent if it’s shoes for women, and mine says tax is 8.5 percent for shoes for men. If you have that visibility at the checkout counter, people would go berserk.”

A number of court cases in the US have ruled that there’s no evidence gender-based tariffs are deliberately discriminating. In May 2014, the US Supreme Court refused to hear appeals from brands including Forever 21, which attempted to challenge an earlier ruling by the Court of International Trade, arguing that tariffs on apparel and footwear were discriminatory because they were based on gender, rather than factors like material or the weight of a product. Forever 21 declined to comment for this article. “There’s no discriminatory intent, but there clearly is a discriminatory impact,” says Taylor.

However, the last few years has seen a shift in men’s shopping habits, with the long-held stereotype that men hate shopping becoming a thing of the past. With men’s clothing becoming more fashion-forward and technically sophisticated, and the menswear market growing (marginally) faster than womenswear — in 2014, menswear sales grew by 1.9 percent to reach $408.4 billion in 2015, compared to 1.6 percent growth in womenswear, reaching $625.9 billion, according to Euromonitor, — some believe the gender price gap will even out.

“I think that’s really changing as men get more involved in fashion and women are more aware of the issue,” says Kit Yarrow, of the assumption that women are willing to pay more for fashion than men.