LONDON, United Kingdom — Meghan Markle already has the attributes of a fashion influencer; a huge social media following, key connections to the industry’s top designers, a popular blog (albeit dormant), and a midas touch that turns what she wears into sell-out gold.

All she’s missing is a fashion line of her own, and brand partnerships. While her outfits have been known to break with royal tradition, and even flout the unwritten protocol of how royal women should dress, the rules of sponsorship and product and brand endorsement are hard and fast for members of The Queen’s household.

Prince Harry and Meghan Markle said in an Instagram post Wednesday that they would be stepping back as “senior members” of the royal family and will “work to become financially independent while continuing to fully support Her Majesty The Queen.” The couple also said they plan to split their time between the United Kingdom and North America.

The announcement took the world — and, apparently, the rest of the royal family — by surprise, with many on Twitter dubbing it the couple’s “Megxit,” ahead of this month’s deadline for Britain to exit the European Union.

Puns aside, the news that the couple (who up to now have been financed by a mixture of personal funds and the British taxpayer), would become “financially independent” begged the question: will Meghan turn her fashion influence into financial clout?

HRH The Duchess of Sussex is already a fashion influencer; a 2018 New York Times article stated she could contribute as much as $150 million annually to British fashion in the form of unofficial endorsements. “I don’t think we’ll be seeing #sponcon from Meghan,” said journalist and royal style commentator Elizabeth Holmes. “It’s a very fine line, but I think she’s extremely savvy and sophisticated [at collaborating in the fashion world],” she added.

There is the question as to whether her capacity to influence... will remain strong after distancing herself from the core royal family.

There is a case to be made that becoming a fully fledged influencer would cheapen Markle’s brand. Her appeal is as an aspirational figure, grounded in both royal status and the authenticity of wearing clothes she was neither gifted nor paid to wear. Similarly, there is the question as to whether her capacity to influence — particularly in the US — will remain strong after distancing herself from the core royal family; although a younger, liberal and even anti-monarchy following in the UK have so-far voiced support for the couple’s move.

However, Holmes said that she doesn’t think their relocation to North America will dampen support for the Duke and Duchess Stateside — if anything, it could increase their popularity, particularly as Americans are “not invested in the monarchy in the same way.”

The Meghan Markle effect took hold from her first public appearance as part of the royal family on Christmas Day 2017, where her Sentaler coat generated a 164 percent increase in online searches for beige coats in just 24 hours, according to Lyst. The brown Stuart Weitzman boots she wore created a 52 percent increase in demand for the brand, while searches for ‘brown boots’ increased 103 percent on the search platform. 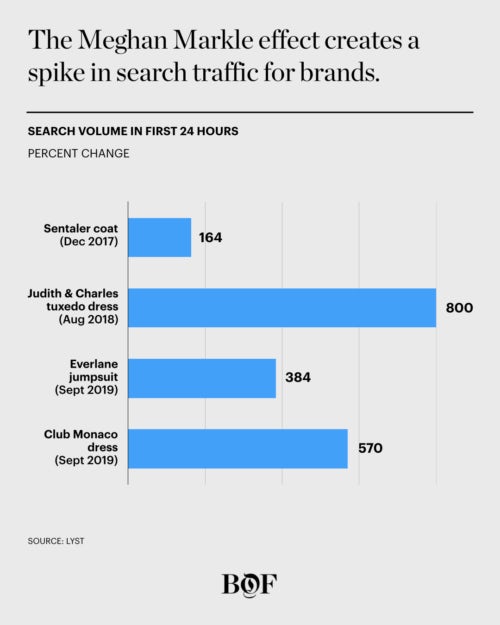 And it has only grown since, as further data from Lyst shows. Notable examples include her choice to wear $150 vegan leather sneakers by Veja at the October 2018 Invictus games, which saw demand for the sustainable footwear label increase 300 percent the following month; and an 800 percent spike in searches for tuxedos within 24 hours of her wearing a Judith & Charles-designed tuxedo dress; and a Club Monaco dress worn during a royal tour of South Africa that prompted a 570 percent increase in searches for the sell-out item, again within a 24-hour time frame.

Markle also had a major fashion moment during her wedding to Prince Harry. Wearing a gown by Givenchy’s Clare Waight Keller
, Markle generated $2.9 million in earned media value (a metric that estimates the value of publicity, engagement and mentions online) for the brand, according to data from InfluencerDB. Her second outfit on the day, an evening gown designed by Stella McCartney, generated $2 million EMV. For reference, the EMV of Dior’s Spring/Summer 2019 runway shows generated $3.7 million.

However, Markle’s efforts as an influencer have largely been unintentional, or at least, unofficial and almost certainly unpaid. Though the royal family’s unofficial endorsements generate £200 million annually for UK companies alone, according to a 2017 report by Brand Finance, enduring protocol prevents them from directly marketing products.

“Anything to do with sponsorship absolutely has to be avoided,” royal commentator and a PR consultant Richard Fitzwilliams told BoF in May 2018.

Wednesday’s announcement likely frees Markle from most, if not all, of these restrictions. That doesn’t mean she’ll hop on Instagram to shill for diet tea and fast fashion tomorrow, however.

That said, the Harry and Meghan brand is going strong, and there are other ways they could monetise it in their quest for financial independence. In December the couple filed a trademark for their foundation, “Sussex Royal,” which covers charitable fundraising, education and social initiatives as well as items like clothing and magazines.

The new sussexroyal.com website also establishes the couple’s approach to media and press relations, stating plans to work with “grassroots media organisations,” champion “inclusivity, diversity and tolerance” and eschew the media pool of established outlets adopted by the rest of the royal family. This new-media-friendly approach, as well as the announcement that they will “continue to share information directly to the wider public via their official communications channels,” leaves the Sussexes poised to become content creators in their own right and cultivate their platforms of influence further.

While it's unlikely she will be relaunching her personal Instagram account anytime soon, said Holmes, "you cannot underestimate Meghan's digital savvy."

Even before her role as a royal family member, Markle was an active part of the celebrity lifestyle market with her own blog, The Tig, which featured posts covering skincare, meditation and travel. It shut down in 2017. All that remains on the site today is a goodbye letter titled “Farewell, Darling.”

After joining the royal family, Markle has continued with an approach to public life reminiscent of The Tig, this time to more charitable ends: publishing a cookbook with survivors of London’s deadly Grenfell Tower fire, launching a one-off clothing line and guest-editing British Vogue’s September issue, which according to estimates from Condé Nast Britain generated over double the PR value of its blockbuster 2018 predecessor starring Rihanna. Prince Harry has also leveraged his influence to lead sustainable travel initiative Travalyst, which counts Skyscanner, Booking.com and Tripadvisor among its founding partners.

While all philanthropic endeavours, these much buzzed-about projects show an entrepreneurial streak that is ripe for monetisation.

Whatever comes next, Markle has a highly engaged following with spending power that will no doubt be a significant factor in the couple’s bid to become financially independent, but it’s unlikely that a partnership with Gummy hair vitamins are in the cards.