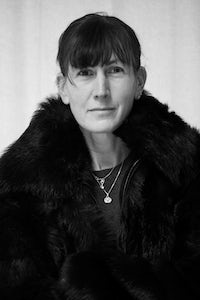 “I grew up with [Helmut Lang] and in that regard, I guess you could say that I offer a historical perspective,” says Browne, who, in her new role, will be responsible for the storied brand’s creative projects, including setting the visual tone of its design, content and marketing. “Beyond that, I believe in the brand's continuing relevance and its importance to fashion.”

According to the brand, working with an editor-in-residence enables Helmut Lang to produce a constant stream of fresh content, in line with the increasing speed at which today’s consumers expect newness.

Following Helmut Lang’s retirement from fashion in 2005, his namesake brand, previously owned by the Prada Group, was sold to Fast Retailing subsidiary Link Theory Holdings. Under Link Theory Holdings’ leadership, Helmut Lang was turned into a contemporary-priced label, losing much of the appeal that the minimalist luxury brand had built in the 1990s.

In an attempt to revitalise the brand, chief executive Andrew Rosen tapped Brian Phillips, founder of New York PR agency Black Frame, in 2016. Together they hatched the idea of rotating editor-in-residence as an alternative to a traditional creative director, responsible for continually bringing fresh perspectives to the brand.

Burley, who was appointed Helmut Lang’s first editor-in-residence in March 2017, subsequently called on Hood by Air designer Shayne Oliver to be the label’s first guest designer. Oliver, who put Hood By Air on hold, showed his debut collection for Helmut Lang, including menswear, womenswear and accessories, during New York Fashion Week in September 2017.

Alongside hiring Oliver, Burley relaunched the brand’s website and introduced projects including Helmut Lang’s Re-Edition programme, which re-issues over a dozen iconic pieces from the brand’s archives. Additionally, Burley launched a Seen by: The Artist Series showcasing three images per month from the archives of different visual artists, including Walter Pfeiffer, Boris Mikhalov and Carrie Mae Weems.

For Browne, Helmut Lang's potential is clear. “If you look around at the fashion landscape today, the influence of Helmut Lang, his relevance, has probably never been greater and it’s evident in the way fashion is designed, presented, and communicated [today],” says the editor. The brand is set to announce its next guest designer in February.