NEW YORK, United States — Gwyneth Paltrow might be the star of Goop, the lifestyle brand she has been not-so-quietly building since 2008. But don’t expect to necessarily see her on the cover of every issue of its newly launched print magazine, the first issue of which officially hits newsstands this week, produced in partnership with Condé Nast.

“We’ll see; I’m open to it,” says Paltrow, whose body is covered in mud on the inaugural cover. “This where I really defer to Anna Wintour and their expertise…. They are very kindly open to me not being on the cover, which would be wonderful, and if I need to be on the cover, that’s okay too. It will be a case-by-case basis.”

Paltrow, after all, has given readers plenty of reasons to be interested in Goop that extend far beyond her star power, including Goop.com’s infamous detox diets, clean beauty regimens and “invigorating” jade eggs, which have become stories in and of themselves. Now with a new perfect-bound print edition, Paltrow hopes Goop’s aspirational wellness lifestyle will reach a new audience that might not be receiving her weekly newsletter, which launched as a personal passion project. 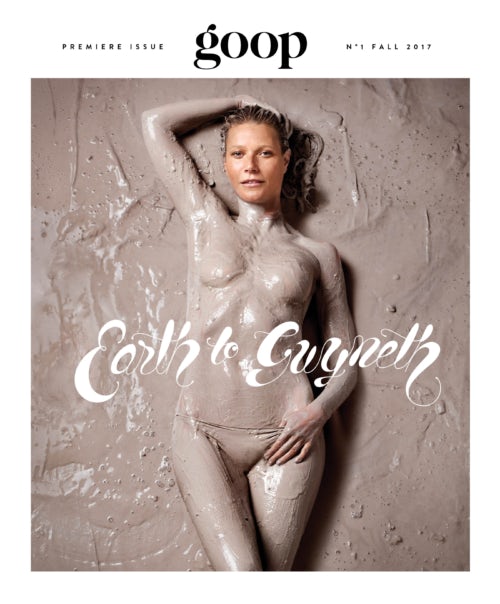 “You get in front of a different demographic when you’re on newsstands all over the country,” says Gwyneth Paltrow, referring to people who may have interacted with the brand once, or heard about it, without engaging repeatedly online. Paltrow is the magazine’s editor-in-chief and has also served as Goop’s chief executive since 2016.

Scale is certainly a point of consideration for Paltrow. In the last nine years, Goop has raised $25 million in venture capital in two rounds of funding and grown into a community-driven lifestyle brand with its own clothing label, skincare line, fragrance, book imprint and Goop Wellness, a collection of vitamins that sold over $100,000 worth of product on launch day. In 2016, Goop’s revenue tripled, with market sources estimating Goop’s revenue in 2016 at $15 to $20 million. A representative for the company said revenue is expected to triple year-over-year in 2017 and that Goop currently has no debt.

This year, Goop has focused on upping its tangible presence. In June, Paltrow hosted its first two-day wellness conference, “In Goop Health.” Then, last Friday, after launching a series of pop-ups across the country over the last several years, Goop opened its first permanent shop in Los Angeles’ tony Brentwood Country Mart, designed by the architects responsible for her own homes.

And finally, there is the magazine. Some may argue that launching a print publication in the digital age is a backwards strategy, but Paltrow insists that it is “very legitimising for the brand — and a really interesting way to explore getting to that next concentric ring of audience… and getting across our point of view and what our values are.” Formalising Goop’s values is especially important now, as the company has come under increasing attacks in the last year from the media, watchdog groups and doctors for allegedly misleading readers. Goop has responded to these claims, including most recently by publishing rebuttals from contributing physicians.

In Condé Nast, Paltrow has a powerful ally — and consultant. (The quarterly title spurred from a conversation between Paltrow and Wintour, Vogue editor-in-chief and the publishing house’s artistic director.) While articles were written by the Goop team, creative direction was led by Condé Nast using original and archival imagery. Goop’s editorial team, including former Lucky magazine editors Elise Loehnen and Jean Godfrey-June, wrote most of the content, supplemented by freelance writers and Condé Nast editors. Vogue.com’s executive fashion editor Jorden Bickham styled a fashion editorial about tailored suits.

Much like Condé Nast’s series of special interest publications — premium issues of repackaged content from the monthly magazines that live on the newsstands for about three months at a time —Goop comes with higher quality paper and a steeper cover price of $14.99 compared to say, Glamour, which is $4.99 an issue on the newsstand.

But it also marks a first for Condé Nast. “We haven’t done anything with another publishing brand in the print space, where we have collaborated to create a new product that didn’t exist before,” says Matt Starker, general manager of digital at Condé Nast, who oversaw the business partnership. “We do this for our own brands all the time,” he continues. “Really, what it came down to was: does this make financial sense?”

With content creation teams already in place at both companies, and the low incremental costs of production and distribution for Condé Nast, the answer, Starker says, was yes: “We have that operation set up from the printing press to the manufacturers to the distribution on newsstands to all of the end-user mailings.”

The partnership is not a licensing agreement or joint venture, like Hearst’s relationship with Oprah for O, The Oprah Magazine, but a revenue share of newsstand and digital issue sales and ad pages. Advertisers include Gucci, Neiman Marcus, NBC and BMW. “It seemed like a pretty coveted purchase and that bore out in sales,” Starker says. Condé Nast is printing just under 250,000 issues — more than its typical 100,000-150,000-run for special print issues — that will be sold via Goop.com and on US newsstands only.

Inspired by niche independent magazines such as The Gentlewoman and Cherry Bombe, Paltrow wanted Goop’s print visual identity to be an immediate differentiator from the more commercial monthly glossies. She told the Condé Nast team that she wanted to “push this really iteratively to the next level of what Goop might look like in the coming years.”

"Gwyneth has such a strong point of view and the magazine is truly a visual delight," said Wintour by e-mail. "I'm excited for people to discover it — both loyal fans and new readers. It's a thrill to have Goop at Condé Nast."

I don’t want it to be a catalogue for Goop.com.

The modern and minimalist design feels on brand for Goop, as do the magazine’s graphic sub-sections — Do, Get, Be, Make and Go — which mirror the site’s original subheadings. But instead of serving as a shopping list of products Goop sells online, the magazine focuses on longer narrative pieces. “I don’t want it to be a catalogue for Goop.com," says Paltrow. (Only about two credits in the magazine go to the site.)

“It’s really important to us to create Goop on paper and create the opportunity for somebody to sit down with a physical magazine and take a minute and experience the brand,” she continues. “We don’t know what the returns on that might be, we don’t know what kind of meaning were going to create for anybody or if we are going to find readers or customers, but I think we are doing it for the sake of the integrity and the beauty of the magazine.”

Loehnen, Goop’s head of content, explains that the magazine provided an opportunity for magazine style writing with a point of view that doesn’t typically appear on Goop.com. “For example, for all of our wellness content on Goop, we publish really straight forward Q and A’s with doctors,” she says. “In the magazine we focused more on wellness that’s experiential, that a writer can dabble in and experience and report.” Other examples include articles on how to approach confrontation, discovering the pelvic floor and reiki, “the popular wellness practice built around the restorative benefits of gentle touch.”

What is perhaps most interesting is that, despite being a digital-first brand, most of the magazine’s content — save for the cover story interview with Paltrow — will not be available to view online. Some pieces, such as an interview with “culinary therapist” Jules Blaine Davis, a.ka. the Kitchen Healer, will live online in a video series. “Hopefully everything will be cohesive, but not repeated,” Loehnen says, adding the image licensing rules barred Goop from publishing the visual content, which contributed to the decision not to publish most articles.

Condé Nast is supporting the release online by building awareness through the social media accounts of its different brands. Select Condé editor-in-chiefs and digital leaders were brought together to strategise ways to promote the magazine through its titles’ own handles. “As we develop the partnership, the goal is to create [digital] content that makes sense,” says Loehnen, suggesting a video of Paltrow and Adam Rapoport, editor-in-chief of Bon Appétit, cooking together as a potential example.

However, don’t expect a mad rush of user-acquisition efforts. “[When] we started to turn the business into an actual business, it didn’t come from a place of, ‘Oh, I just want to sell stuff,’” Paltrow says, referring to the fact that Goop didn’t even sell any products on the site until four years after she sent that first newsletter. “On the media side, we really look to expand the platform in different ways so we can constantly be creating relevance for ourselves in the marketplace, and really setting up the infrastructure to create the content for the commerce.”

As for now, the magazine will remain a top priority: “We will see how the first year goes.”