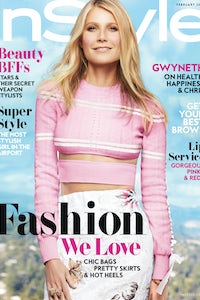 NEW YORK, United States — In his first move as chief revenue officer of Time Inc. since assuming the role in December, Brad Elders sent a memo to staff on Wednesday outlining additional changes to the way the publisher’s advertising business is organised, with one of the most significant changes made at InStyle, its marquee fashion title.

Between April and July, Time Inc. formed seven sales groups categorised by the type of advertiser it is servicing: beauty, food and beverage, technology and telecommunications, pharmaceuticals, financial services, automotive and retail. The goal is to have sellers in each group work across magazine brands as well as platforms. In result, traditional publisher roles were eliminated, but magazines retained brand-specific sellers who work in tandem with the cross-company sales groups.

This week, Elders announced the formation of five additional sales groups — entertainment, fashion, government and industry, home and travel — and yet another reorganisation of leadership that is meant to help clarify how magazine brand-focused sellers and category-focused sellers work together.

The rearrangement will result in the elimination of about 30 jobs. However, a representative for Time Inc. said that the layoffs are not about cost cutting, but an evolution based on client feedback and to simplify hierarchies.

Rumours of a takeover have dogged the publisher in recent months as print, subscription and newsstand revenues continue to decline by double digits. In the quarter ending September 30, 2016, revenue was $750 million, a 3 percent decrease from the same period in 2015.

While some of Elders' moves are in line with the 2016 restructure, others hark back to something more traditional. As InStyle’s VP of sales, Martinez will occupy a role not unlike that of a magazine publisher. He previously reported to Ron King, who oversaw InStyle, StyleWatch and other titles, and whose position has been eliminated. However, Martinez will be the only brand leader at Time Inc. with just one magazine in his purview. For example, Cece Ryan, also VP of sales, will oversee StyleWatch, People, Entertainment Weekly, People en Español and Essence.

“Kevin will be the driving force behind InStyle in the marketplace,” says Kovacs. “I think it’s been really important for us, as we move forward, to highlight and strengthen that leadership position in this particular case.” Martinez previously worked with editor-in-chief Laura Brown at Harper’s Bazaar, where she was executive editor before replacing Ariel Foxman at InStyle in September 2016.

In the first six months of 2016, InStyle's print edition had an average paid-and-verified circulation of 1.75 million readers a month, almost flat from 1.74 million the previous year, according to Alliance for Audited Media. Average single copy sales dropped from 310,000 to 256,000 in the same time period. Brown has been tasked, in partnership with Martinez, with bolstering the InStyle brand across all platforms, where the publication says it has an average monthly reach of 30 million.

While mass publications like Glamour and Cosmo have a broader circulation, InStyle tops high-fashion titles including Elle, Vogue and Harper’s Bazaar. The title also has the highest number of readers with a household income of more than $100,000, yet another reason why Time Inc. is willing to place a big bet on the brand.

In addition to leveraging events, licensing and television projects, Martinez plans to drive revenue through a digitally-led approach. “What I want to do is cast a very wide net and make it very attractive for any advertiser to experiment or go in any direction they need to under the umbrella of the InStyle brand,” says Martinez, using the Foundry, Time Inc’s branded content studio, and Viant, an advertising technology company acquired in March, as examples of unique solutions offered to advertisers.

While Brown’s vision for InStyle has yet to hit the newsstands (March will be her first full issue), Martinez says her changes will be visually striking and highlight the new generation of social media savvy celebrities. But will that alienate InStyle’s core print readership?

Quite the opposite, Martinez believes. “The woman who lives in the fly-over states used to sit and wait for a magazine to see what’s going to be in style,” he says, adding that, through social media, “they know everything that’s going on in Paris, Milan and London before we do. We can elevate the conversation, which is exactly what Laura is doing.”

If the new order at InStyle is effective, it could presumably result in similar setups at other titles. Regardless of how it nets out, however, the latest news out of Time Inc. marks yet another chapter in an ongoing story of consolidation in the magazine industry, as publishers restructure their advertising and editorial teams to find cost efficiencies, leverage audiences at scale and increasingly blur the lines between magazine brands.

Condé Nast began sharing more resources last year before restructuring in October into five groups, each with its own leader. While Hearst was already sharing staff among titles, it started combining the beauty, fashion and entertainment departments at several women’s titles in November.

“We want to serve our customer needs and really having a deep understanding of the marketplace is also critical. It’s about bringing back that information and marrying it with our brand experts," says Kovacs. "This has been an evolution."