Chicago Cashes in on Virgil Abloh

It’s the summer of hypebeasts in the Windy City, as the first museum exhibition dedicated to Abloh’s prolific career draws crowds of fans looking to experience the designer’s work - and snag limited-edition merch.

Chicago Cashes in on Virgil Abloh

It’s the summer of hypebeasts in the Windy City, as the first museum exhibition dedicated to Abloh’s prolific career draws crowds of fans looking to experience the designer’s work - and snag limited-edition merch.

CHICAGO, United States — At a recent art exhibition here, a patron offered a security guard $1,000 for his sneakers.

“He complimented the man's shoes and said, ‘You have $1000 on your feet, you know that right?’” said Amelia Olivi, a museum visitor who witnessed the exchange on the opening day of the Museum of Contemporary Arts Chicago’s newest exhibit on Monday.

It’s no mystery why the staff’s shoes are in such high demand: they’re working “Virgil Abloh: Figures of Speech,” an exhibit dedicated to the Off-White and Louis Vuitton designer’s prolific career in art, fashion and music. And they were dressed for the occasion in yet-to-be-released Off-White x Nike Air Force 1 sneakers designed for the show. Two pairs are already available for $3,000 on StockX, a resale site.

The exhibit, which runs through September 22, has temporarily elevated Chicago to a global fashion destination, at least for the hypebeasts who hang on Abloh’s every drop and collaboration. In addition to merchandise sold at the museum, Louis Vuitton has opened its own temporary shop (or “residency”) nearby, featuring Abloh’s second men’s collection for the luxury label and exclusive pieces. 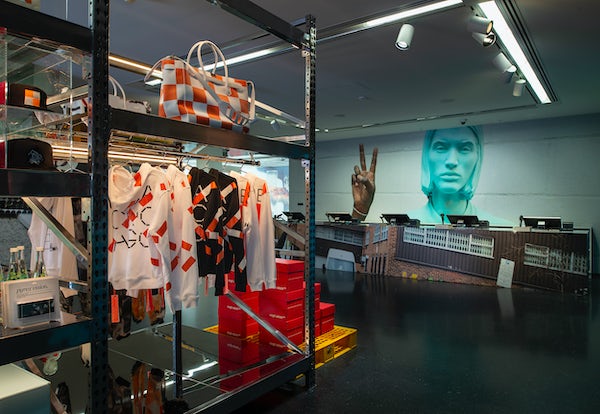 And less than half a mile from the museum, Nike has opened a temporary shop of its own. The “NikeLab Chicago ReCreation Center ℅ Virgil Abloh” will sell limited edition product available only to members of the brand’s loyalty program and also host panels and workshops for Chicago-based creatives.

Then there are the drops: the security guard’s sneakers are just one of a series of limited-release items that will be available — likely very briefly before they sell out — on Frenzy, the Shopify-owned sneaker and streetwear app.

It all adds up to one of the highest-profile examples yet of the increasingly intertwined worlds of fashion and art. Where museums once considered costume departments a level below fine art, over the last decade, fashion exhibits have brought new audiences in droves. Last summer’s Costume Institute exhibit at the Metropolitan Museum of Art, the show kicked off each year by the Met Gala, was the museum’s most-visited exhibition ever, breaking a 40-year-old record. More than 1.6 million people visited the Met to see “Heavenly Bodies: Fashion and the Catholic Imagination.” 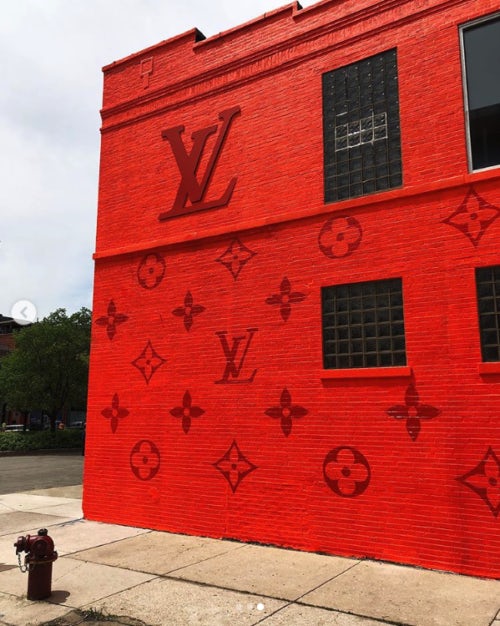 The MCA, no doubt, has similar expectations for its Abloh exhibit, which is only the second one of the Chicago museum's exhibits to require timed ticket entry. Those who are familiar with Abloh’s unlikely rise from architect to one of the most influential tastemakers in fashion know all about his close connection to the city. His family still lives there despite his long commute to the Louis Vuitton and Off-White offices in Paris.

Nick Davis, an analyst at an investment bank in Chicago, made a weekend of his visit to the Abloh exhibit. He saw the Louis Vuitton creative director perform Thursday at the nightclub Tao ahead of the exhibit’s opening weekend celebrations. On Sunday he received early access to the exhibit with his MCA membership, where he bought a re-released version of a Pyrex shirt for $150, as well as a 2018 issue of Kaledioscope magazine featuring a cover interview with Abloh, and an exhibition poster Davis plans to have framed.

Then he went over to the Louis Vuitton pop-up, where entry is available by appointment only, and bought one of the exclusive Chicago pieces — an orange version of the t-shirt that staff wore at Abloh’s debut Louis Vuitton runway show in summer 2018. Finally, on Sunday night, Davis saw Abloh DJ again at the Ace Hotel.

“I think what Virgil is doing is very rare,” he said, describing the exhibit as a "full circle" moment. “Being able to buy both Pyrex and Louis Vuitton in the same weekend was just iconic to me.” 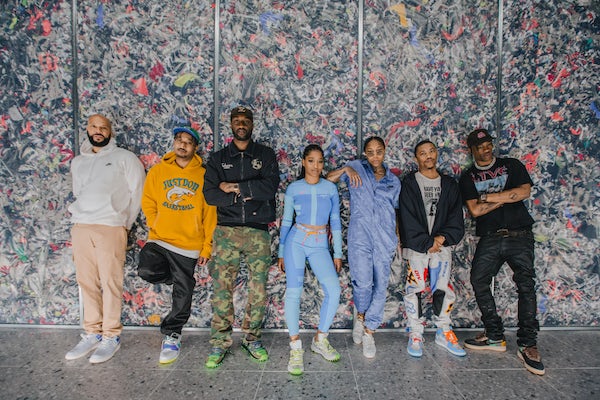 Shopping was more challenging on opening day. Olivi, who bought her exhibit tickets back in November, said the gift shop was too full to enter on Monday. She plans to return.

The “Church & State” shop, as Alboh named it, isn’t your regular exit-through-the-gift-shop museum souvenir stand. Featuring walls covered by giant Jeurgen Teller photographs and fitting rooms with plastic PVC curtains, the store offers recreations of some of Off-White’s best-selling and earliest t-shirts and sweatshirts with some MCA branding, as well as t-shirts that include images from the exhibit. Abloh has also collaborated with artists Simon Brown and Futura on t-shirts and other items.

All of the proceeds from the sale of the products available in MCA’s exhibition shop, and from the Nike Air Force 1’s, will support the museum’s education programs to benefit the youth of Chicago.

Plus, people who sign up for a museum membership at the “Household” payment level for $85 will be eligible to pick up a limited edition MCA tote designed by Abloh (while supplies last). Yet another way to buy into the summer of Abloh. That is, until the exhibit picks up and heads to its next locations: Atlanta this autumn, Boston next summer and Brooklyn next winter.

In Defense of Virgil Abloh