EAST RUTHERFORD, United States — Since the advent of e-commerce, fashion brands have tried just about everything to get people back into their shops, from in-store yoga classes and photo booths to elaborate visual displays designed for Instagram. It hasn’t worked: over 8,000 stores have closed this year, according to Coresight Research.

The owners of a new megamall in New Jersey are adopting a more extreme approach. The American Dream mall, which is slated to open in late October about 10 miles west of Manhattan, is filling its 3 million square feet with restaurants, roller coasters, water slides, an ice rink and a 16-story indoor ski slope.

Overall, more than half of the space will be turned over to entertainment, though there will be plenty of stores too. (A spokesperson, in fact, said repeatedly that the company is avoiding the term "mall.")  Hermès and Lululemon are among the brands opening flagships, and a luxury wing anchored by Saks Fifth Avenue and Barneys will also house Moncler and Saint Laurent.

It’s enough to give shoppers whiplash: a bunny garden, an aviary and a water park that turns into a boozy playground for adults once a month, rubbing elbows with old-world luxury brands. But that juxtaposition is the point. At a time when fewer Americans are visiting their local malls, outrageous attractions may be brick-and-mortar retail's last hope.

In fact, it was only after Nickelodeon had agreed to open an amusement park and DreamWorks signed onto a water park that many luxury brands signed their leases.

“I love the whole ski slope idea, I love the theme park,” said Robert Chavez, president and chief executive of the Americas division of Hermès. “And I just felt that it was a it was going to be a very dynamic place.” 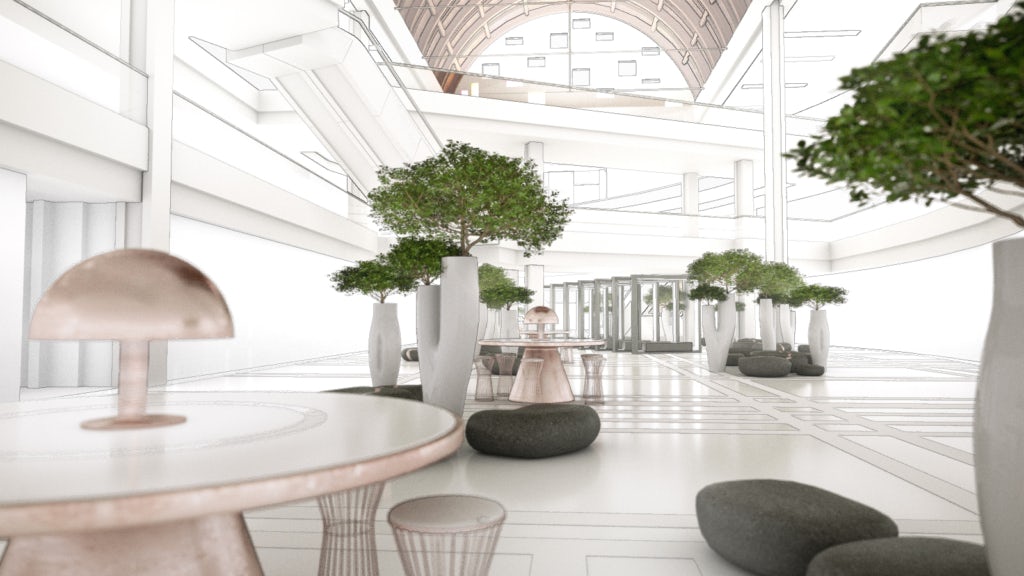 The Hermès store will be the French luxury brand’s 12th location in the New York-New Jersey area, but the spot was too good to pass up, Chavez said. “There might be a little overlap,” he conceded.

The mall is 87 percent leased as of August, according to its developer, Triple Five, which also built two of North America’s biggest shopping complexes: the Mall of America in Minnesota and the West Edmonton Mall in Alberta, Canada. Still, American Dream will open its doors at a time when the retail sector is faltering. Digital newcomers threaten the viability of brick-and-mortar stores. Malls across the country are struggling to keep the doors open as anchors like Lord & Taylor and Sears have shuttered stores. Foot traffic has resumed its decline after an uptick last year, according to retail analytics startup Thasos.

"There has to be a good mix of tenants,” she said. “When I look at the [most successful] malls, people want to go there and they’re going to be there all day.”

We always thought if … we could supersize it and put it on steroids and bring it to ... outside of Manhattan, that we were onto something big.

But the sheer outlandishness of American Dream’s ambitions could set it apart from its competitors, regardless of its retail tenants. If Hudson Yards is a billionaire’s playground, American Dream wants to be Disney World.

“Our competition today isn’t … the shopping centres in this market place, our competition is Disney World and Universal [Studios],” said Don Ghermezian, chief executive of Triple Five. The Mall of America and West Edmonton Mall both generate north of $1 billion in sales every year, he added. “We always thought if … we could supersize it and put it on steroids and bring it to ... outside of Manhattan, that we were onto something big.”

The Dawn of American Dream

The project hasn’t been without hiccups, to say the least. Critics are already bemoaning the potential traffic congestion on New Jersey's already packed roads. The project, nonetheless, a decade-and-a-half in the making, was troubled from the very beginning.

First proposed in 2003 as “Xanadu” by the real estate investment trust Mills Corporation (now a part of Simon Property Group), it was plagued by lawsuits and mounting costs. Construction ground to a halt at the height of the recession. Though developers had already poured $2 billion into the project, all they had to show for it was an unfinished checkerboard facade that served as an eyesore for commuters.

At one point Related Companies, the same developer behind Hudson Yards, was in talks to take over the project. Ultimately, the complex was sold in 2011 to Triple Five, the Canadian development firm founded by the Ghermezian family, who made a fortune first by importing Persian rugs and later as part of Alberta’s oil boom in the 1960s.

Triple Five paid $160 million for a 75-year ground lease, which means the developer will own the land until the terms of the lease ends. The site encompasses 130 acres. To get the project back on track, the city of East Rutherford sold $1.1 billion in tax-exempt municipal revenue bonds, and Triple Five secured $1.7 billion in private construction financing from a group of lenders led by JPMorgan Chase and Goldman Sachs.

A rendering of the exterior | Source: Courtesy

To obtain that loan, Triple Five had to put up some startling collateral: a 49 percent stake in Mall of America.

According to a 2017 appraisal of the project by real-estate brokers CBRE, cited by The Real Deal, the property will fetch $117 million a year in retail rents and $82 million in ticket sales from the entertainment tenants. That includes the annual rent of Saks Fifth Avenue, which will amount to about $2 million for the 120,000-square-foot space.

There’s nothing we can’t host on the property.

Ultimately it will be the attractions that will make or break American Dream, said Greg Tannor, executive managing director at brokerage Lee & Associates and a former consultant for Triple Five.

“The stakes are very high,” he said. “They’re putting their money where their mouth is and if they’re risking that much, they know what kind of reward they’re going to see.”

The Disney World of New York?

Ghermezian said he is expecting upwards of 100,000 visitors every day. That’s compared to about 37,000 visitors per day at Hudson Yards and 67,8000 visitors at Mall of America as of late August, according to foot traffic analytics startup Placer.ai. He expects to draw a significant number of tourists, particularly those with children (an American Dream spokesperson said the mall will offer on-site care for both kids and pets).

“A very large percentage of them are coming with children,” he said. “I challenge you to tell me after one day in New York or New Jersey, what are these people doing with their children?”

American Dream’s Chief Creative Officer Ken Downing, the former fashion director of Neiman Marcus, can rattle off a seemingly endless list of activities, from shopping and dining to an indoor meadow with bunnies available for cuddling and even adopting.

There will be helicopter pads, an Angry Birds-themed mini-golf course, a Legoland park, an aquarium, farmers markets, podcast studios and a large Burning Man-inspired LED installation. In the luxury wing, shoppers will lounge on bespoke furniture outside stores — and can buy a chaise or sofa if they take a liking to it. The DreamWorks water park will feature private poolside cabanas designed by Jonathan Adler. Multiple hotels are planned adjacent to the mall, with a goal of building up to 3,500 rooms and a convention center.

Some people see a ski slope and all they see is a ski slope. I see a fashion show, I see RuPaul’s Drag Race being filmed there.

Events will be planned year-round, including concerts and fashion shows. On Black Friday, a man dressed as Santa Claus will descend from a helicopter and ski down the indoor slope.

“There’s nothing we can’t host on the property,” Downing said. “Some people see a ski slope and all they see is a ski slope. I see a fashion show, I see RuPaul’s Drag Race being filmed there.”

That’s the plan, anyway. Retail experts say the proposal at the heart of American Dream — that an infusion of entertainment and experiences can revive retail — remains largely theoretical. In the New York area, retailers know that consumers will reliably shop in Soho and Fifth Avenue, whereas developments further afield must first convince shoppers to make the trek.

“You’re building something out of the ether in an area that’s so driven on the foundation of authenticity," said Jonathan Schley, vice president of the global retail advisory and transaction services division at CBRE, whose previous clients include APC, Acne Studios, Glossier and Byredo.

The over-the-top nature of American Dream also runs against the prevailing trend in fashion, where even some of the biggest global brands now see smaller, localised shops and limited-edition drops as the best way to win over customers. 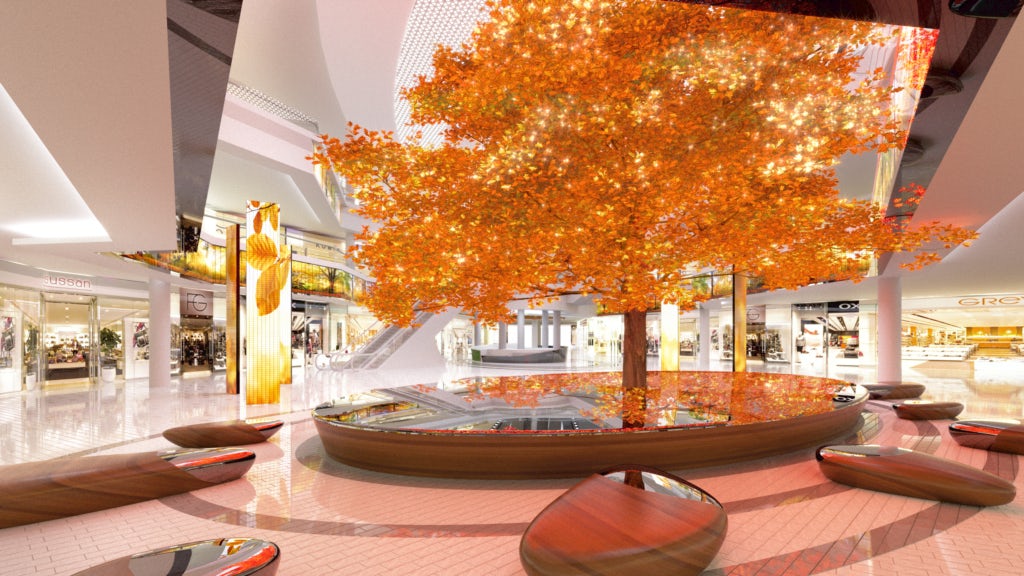 “The trend in the fashion retail industry is that bigger is not better, whether that’s stores or developments,” said Robert Burke of retail consultancy Robert Burke & Associates. “People are looking for more intimate stores, they’re looking for environments that are more personalised.”

Beyond its ferris wheel and rides, American Dream has another asset that grants it unique credibility among the fashion crowd: Downing, who left Neiman Marcus in April after nearly 30 years.

Downing is responsible for making sure the “look and feel” of the mall appeals to shoppers as well as thrill-seekers and bunny lovers. Over the last few months, he has given tours to fashion editors and other industry figures.

“One of the biggest challenges of brick-and-mortar retail today is the lack of creativity, the lack of cinematic moments — the grand theatre that used to make shopping fun and give people a reason to go into a store,” he said.

His vision is a charming one, even if many elements, including bee hives and fruit trees on the roof, exist only on paper for now.

“Ken knows the fashion business inside and out — he knows that his customers want,” said Fern Mallis, a fashion consultant and the former executive director of the Council of Fashion Designers of America. “He’s bringing a lot of interesting energy and opportunity to [American Dream]. I think it has a good chance of success.”

European Malls Are Alive and Well, According to This Market Leader's Latest Results