NEW YORK, United States — The number one way Everlane’s physical stores are different from its competitors? “There are a lot less stacks,” says chief executive Michael Preysman, who opened the doors to the direct-to-consumer brand’s first permanent retail space — located on Prince Street in New York’s Nolita neighborhood — in December 2017. “Nobody wants to shuffle through piles anymore.”

Four months into the experiment — and mind you, he continues to view it as an experiment — the goal is still to improve the traditional retail experience by getting the details right. No matter how good the sales associate is at folding jeans, stacks of inventory displayed on counters can be irksome for employees and consumers alike. “We’re trying to keep as much hanging as possible,” he explains. “To me, these are the little things that offer a reason to come back.”

Thus far, Preysman — who founded Everlane in 2011 as an antidote to inflated basics brands like Gap and American Apparel that lost their way facing competition from fast fashion — seems to have offered at least a couple of reasons to come once to his two stores. (A second location opened on Valencia Street in San Francisco’s Mission District in March.)

According to Everlane, which has raised at least $18 million from investors including 14W, Brian Sugar and Kleiner Perkins Caufield & Byers, sales per square foot at the stores are averaging more than $4,500 — three times that of Lululemon, which averages $1,560 per square foot. Of course, that hefty figure doesn’t tell the whole story. Everlane’s stores are small — their New York location is just 2,000 square feet; in San Francisco, it’s 3,000 —which immediately hikes things up. The company also makes it easy to shop online for products not available in-store. (Although Preysman says that offline-to-online purchases do not currently make up a “significant” portion of in-store revenue.) 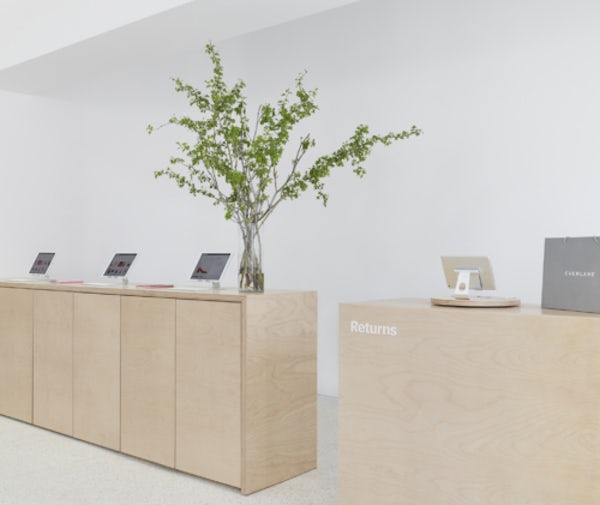 That’s not to say Everlane, which has earned as much attention for its transparent pricing strategy and Millennial-sensitive marketing campaigns as it has for its minimalist product, has it all figured out. “We have tons of issues that we’re trying to work through,” Preysman admits. For one, the team is still determining the right product mix between men’s and women’s, and between evergreen styles and seasonal items. (It also continues to launch new categories, such as underwear for women, which it announced earlier this week.) There have been operational hiccups, too. In January, Everlane’s New York location had to close down for a more than a week to upgrade fixtures and fix its scuffed-up floors. (“They’re white. It’s winter. We got three times more foot traffic than expected. It’s a whole thing,” read the email and Instagram marketing copy.)

Thus far, though, the jump to physical retail has been a good thing for growing the brand, which needs to meet potential customers through as many channels as possible. Category leader Warby Parker, which generates north of $250 million annually, has shown that physical retail still matters, with 65 stores open across the US. However, not all direct-to-consumer brands have fared so well when expanding offline. Nasty Gal only managed to open two permanent stores before its business took a nosedive. Kit + Ace, the athleisure brand launched by the founders of Lululemon, crashed and burned after rolling out 60 stores over the course of just a couple of years. In April 2017, the company announced that it would close all of its US, UK and Australia physical stores, bring the total count to just six in Canada.

It’s no surprise, then, that Everlane is taking things a bit more slowly. Preysman’s current goal, he says, is for offline to eventually make up 20 to 30 percent of annual sales. In 2018, brick-and-mortar will make up somewhere between 10 and 20 percent of sales. (While Everlane does not share revenue figures, the company generated $51 million in 2015, according to a report in Recode. Preysman told The Washington Post that sales were set to double in 2017, which — if they didn’t shrink in 2016 — puts Everlane’s annual revenue north of $100 million.) There are plans to open another physical location in 2018 and a few more in 2019.

“I will be the first to admit that — 100 percent — nobody expected it to work this well,” he says. “Retail is not dead. The old form of retail is dead.” So, what does new retail look like? Preysman outlined five key tactics that have contributed to Everlane’s early offline success:

1. Make it look good. Everlane’s online brand identity, glazed in white Scandinavian minimalism, has successfully made the leap to three dimensions via white walls and light wood fixtures. Preysman’s team has honed the company’s physical identity through dozens of pop-up shops, showrooms in New York and San Francisco and a pilot store under its headquarters. “Most stores are ugly and the experience of shopping in them is ugly,” he says. “Not everybody can afford to shop in luxury stores. What we are trying to create is that feeling [of luxury], but with the openness and love — and total accessibility — of a brand like Everlane.”

2. A well-managed line can be great for business. When the New York store opened in December, customers waited 45 minutes to an hour to shop. More than three months later, there still continues to be a line on the weekends. When the San Francisco store opened in March, there was a one-to-two hour wait. Tenets of social psychology — the scarcity principle and the social proof principle in particular — explain why a queue is good for a business like Everlane. Supreme’s Thursday drop proves that a long line needn’t ever thin out. Everlane allows up to 35 people into the store at once, ensuring a high-enough turnover without crowding the space.

3. Choose your neighborhood wisely. Charming mixed-use developments are sprouting up all over the US, clustering retail stores with boutique fitness studios and fast-casual restaurants. (In an effort to woo cool, young or exclusive brands, developers often offer serious introductory deals on rent, too.) But Preysman isn’t buying the efficacy of those increasingly cookie-cutter projects. “I don’t think you can manufacture boutique shopping,” he says. “It starts to look like Disneyland.”

Instead, he has chosen locations where the Everlane customer would likely already be shopping. In New York, that’s Nolita, which is close to Soho’s tourist scrum but still populated with locals. In San Francisco, a notoriously tough city for retail, the Everlane store is located far away from the main shopping hub of Union Square. Instead, it’s on a busy-if-not-retail-heavy street in the Mission, near the company’s headquarters. Again, it’s where many young professionals live— or at least want to spend time.

4. Focus on the shopping experience first, experiential marketing second. Right now, brands are obsessed with generating foot traffic through experiential marketing, whether that means hosting a special shopping event, panel discussion or workout session to help build a community around the store. While those things can all help a store feel like “a third place” — the meeting spot between home and work — they won’t necessarily result in conversions if the product and service are not up to par.

“We are doing community things, yes, but first we’re asking, ‘How do we make the everyday experience enjoyable?’” Preysman says. One way is through hospitality, which includes things like “making the line fun and creating a space that features the type of architecture we’d want in our homes.” A high-touch service experience — including seamlessly integrating online and offline shopping — is another major focus.

5. Prioritise returns. Preysman is no fool: he understands that customers returning garments — in particular, items they bought online and don’t want to be bothered to pack up and send back — will make up a significant percentage of his foot traffic. In Everlane’s San Francisco store, there is a dedicated returns kiosk so that there’s no waiting on the main line. Again, it’s the little things. “There’s a new form that has to exist,” Preysman says. “We’re starting to hit on it, but there’s a lot more to do.”

What Goes Into Making Everlane's Earth-Friendly $68 Pair of Jeans