MANHASSET, United States — Ask any Hamptons regular where they shop for fashion on “the Island” and it’s likely that Hirshleifers, which sells everything from Chanel to Off-White, will be their first answer. A decade ago, the 107-year-old specialty retailer, a little over an hour’s drive from New York City in good traffic, was better known for outfitting mothers of the bride. Now, followers of Saint Laurent and Sacai beat a path to its door.

When sisters and co-chief executives Shelley, Caryn and Lori Hirshleifer took over the family business in 2004, they knew that they had to up their designer quotient in order to appeal to the evolving tastes of local consumers. Five years ago, they developed a business plan that not only included expanding square footage and refreshing interiors, but set an intention to go “full-blown fashion,” says chief creative officer David Sills, husband of Lori Hirshleifer.

“We’re competing in a global arena now,” Sills says. “If you asked our client 10 years ago, or even seven years ago, where they shopped, they would tell you locally. Now when you ask them, they say they love the shoe salon at Selfridges in London, Dover Street Market in Tokyo, the Brunello Cucinelli shop in Rome. We don’t compete with a local fashion store.”

Hirshleifers’ formula of peppering single-brand shop-in-shops — which are not operated as concessions, but on the traditional wholesale model — through a multi-brand environment has resonated with its clientele. Today, the store generates sales of more than $3,000 per square foot and has nearly doubled its revenue over the past five years, on track to reach $100 million per year by 2020. In the autumn, the store will open new shop-in-shops featuring Saint Laurent and Kith.

And yet, while Hirshleifers’ success is notable, it’s not singular. In what feels akin to the 25-year-high in vinyl record sales at a time when digital streaming dominates music, independent specialty stores — especially those in secondary and tertiary American cities — are thriving, becoming increasingly important partners to designers who feel squeezed by unfair terms and smaller payouts offered by the bigger players.

The Webster, which first opened in Miami in 2009, has since expanded to the city’s Bal Harbour shopping mall as well as Houston, Texas, and plans to open a 12,000 square-foot store in New York’s Soho neighbourhood later this year. Overall sales have doubled over the past three years and trebled in the past five years, according to founder and president Laure Hériard-Dubreuil, and are even up 12 percent year over year at the original Miami location, despite increased competition and a slowdown in traffic from South America.

Forty Five Ten, which first opened in Dallas in 2000, debuted a 37,000 square-foot flagship in the city’s downtown in November 2016, converting its original location into a home store. Since receiving an injection of capital from local billionaire developer Tim Headington in 2014, expansion has accelerated. The retailer has also opened TTH by Forty Five Ten in Dallas — a small-format store curated by fashion director and industry celebrity Taylor Tomasi Hill — as well as a location in Houston and most recently Napa Valley, California, close to Thomas Keller’s famous restaurant The French Laundry. Forty Five Ten co-founder and president Brian Bolke says that overall sales have trebled in the past three years and an average 40 percent of transactions each week are new customers.

Across the United States, specialty retailers are raising their profiles, from favourites like Capitol in Charlotte and Neapolitan in (Chicago suburb) Winnetka to upstarts including Hero Shop in San Francisco and Fivestory in New York. Assembled Brands, which owns e-commerce site The Line, has made an imprint with its concept store The Apartment by The Line, a collection of expertly curated retail shops: two permanent spaces in New York and Los Angeles, with temporary locations open intermittently in Amagansett and Chicago. 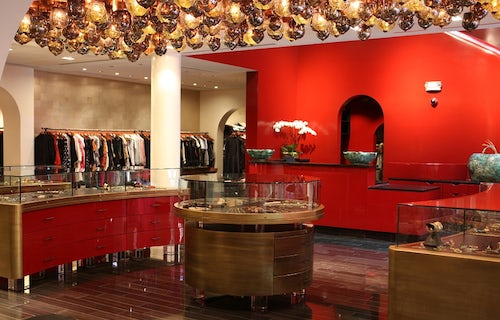 This is good news in what often feels like a permanently gloomy retail landscape. But it wasn’t always looking so good for the indies. In the wake of the 2008 financial crisis and the recession that followed, a spate of prominent specialty retailers across the US shuttered, including Detroit legend Linda Dresner’s New York outpost (2008), Los Angeles institution Tracey Ross (2009) and the revered Louis Boston (2015). At the time, many in the industry declared that e-commerce would finish off several more. But in a unique turn of events, it’s the once-untouchable luxury department stores — beholden to discount culture, overstored and facing potentially insurmountable online competition — that have been hurt most by the shifting retail environment.

“Everybody is re-examining their relationships with the major stores because they’ve become so promotional,” says Gary Wassner, chief executive of Hilldun, a financial factor. “In most cases, they are still making money at the end of the day, but not in all cases. When the margin agreements are too strict, too difficult… even the selection of doors that the majors put the brand in may not be appropriate or right for them.”

This disconnect opened a window of opportunity for stores that rely less on discounts and more on unique selection and personal relationships with their customers. The fact is, most department stores sell the same products. With the internet only a click away, price comparison has become the norm. In comparison, what specialty retailers offer is a level of attention and curation — often stocking the piece a more cautious department store buyer might not take a chance on — that is both valuable and differentiating.

If a luxury customer is going to bother shopping in a store, it’s likely that she wants a steer in one way or another — and she’s willing to pay a premium for advantages like early notification of new, exclusive items coming through the door, or access to a friends-and-family sale. Sales associates at specialty stores build personal connections with their clients, spending time with them outside of the store, texting them images of items they think they might like. The relationship mirrors the hairdresser-client dynamic. (This happens at major department stores, too, but it’s not the whole business.)

“Our top sales associates are best friends with our customers,” says Lori Hirshleifer. “While the visual aspects of the store have evolved, the core thing we do well is service. Ultra-high-net-worth clients are our single fastest-growing area.”

It also helps that the store owners of many of these retailers are also the head buyers, meaning that there is zero filter between the showroom and the sales floor. “Today, if you want to buy clothes, you can go on the internet. You know what you want and what you like,” says Rabih Kayrouz, designer and founder of Maison Rabih Kayrouz. “We go to Ikram not to buy Rabih Kayrouz or Chanel, we go to Ikram to buy Ikram’s choice. We go to A'maree's [in Newport Beach] to buy A'marees’ choice, we go to The Webster to buy Laure’s choice.”

“There was a shake-up after the recession, but those who have survived came out really strong,” adds Jan-Hendrik Schlottmann, chief executive of Derek Lam, which derives 20 to 25 percent of its wholesale business from specialty retailers, depending on the season. “The economics changed in their favour. The sell-throughs are somewhat better. [Independent retailers] just know their customer better. It’s often the owner who buys. Brian [Bolke] is in every meeting.” 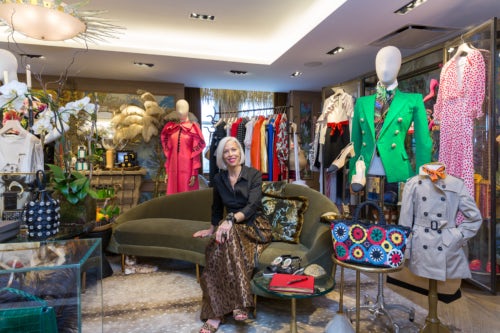 These owners and their closest collaborators are often raised to celebrity status within the industry. Ikram Goldman, founder and owner of Ikram in Chicago, is perhaps the most recognisable retailer in the country, thanks to her association with former First Lady Michelle Obama. Bolke savvily brought in Tomasi Hill, a former fashion editor and major street style star, developing an entire retail concept around her. Likewise, shoppers that visit The Apartment by The Line are often fans of executive creative director Vanessa Traina. In June, Bergdorf Goodman, the venerable specialty retailer owned by the Neiman Marcus Group, opened Linda’s, a shop personally curated by fashion director Linda Fargo. Thus far, the endeavour has helped to drive sales, according to sources within the company.

What’s more, after years of ignoring, or avoiding e-commerce, some of these specialty retailers have also developed impressive online businesses. MatchesFashion, which started out as a specialty chain in the UK, is now a global e-commerce player, with £204 million ($264 million at current exchange) in revenue in 2016. Many independent retailers partner with luxury marketplace Farfetch. (Hirshleifers, Forty Five Ten and The Webster are all partners.) Farfetch, which generated more than $800 million in retail sales in 2016, helps to clear excess inventory and also reach a new audience.

“We hear all the time from boutiques that customers have come into their stores because they discovered them on Farfetch,” says the company’s chief operating officer Andrew Robb. “We are passionate believers in the importance of taking a seamless, multichannel approach and these stories really validate that.”

All of this often adds up to better sell-throughs. In some cases, designers are rethinking their sales strategies, working harder to develop and maintain relationships with specialty players that are often more willing to offer qualitative product feedback in addition to quantitative data. (Designers often complain that it’s difficult to find an answer as to why something is selling — or not — in a department store.)

“We have a long-term strategy and that’s quality versus quantity,” says Gabriela Hearst. Since launching her namesake collection in the fall of 2015, the designer has been careful to ensure wholesale distribution is split fairly evenly between major stores (36 percent), independent retailers (31 percent) and online-only retailers (33 percent). (She sells her handbag line direct-to-consumer only. As a result, direct sales are a larger part of the business than wholesale.)

“For us, it’s more about the geolocation and the relationship with the clients, making sure there are strong connections,” Hearst adds, citing her partnerships with Traina, Bolke and Neapolitan’s Kelly Golden as significant to the label’s early success. “I really believe there is an oversaturation of stores and there needs to be an editing period.”

To be sure, independent retailers offer a glimmer of hope in what feels like an otherwise dismal environment, especially for modest-in-size, apparel-driven fashion brands that generate $5 million to $25 million in sales annually. But they are certainly not a cure-all. Their ability to be nimble means that they are often less consistent with their buys — sometimes an order will be very big one season, small the next, or they’ll skip a season altogether. And they simply don’t place orders at the scale of department stores.

However, the next chapter of American retail will likely see a thinning out of larger department stores and a plumping up of certain specialty retailers with the financial backing to expand. This may put the indies and the majors on a more level playing field, all vying for a shopper whose choices are increasingly varied and dynamic.

“Major stores are in the midst of redefining themselves, specialty stores don’t have to,” Wassner says. “To me, it’s an interim. We’re in the middle of a transformation.”

The Growing Business of Private Clients

Downtown Dallas Gets a Fashionable Makeover