The Cincinnati-based department store chain plans to close 125 stores over the next three years, mostly in struggling malls, the company said Wednesday at its annual investor day. A reduced footprint will save the company $1.5 billion in the next two years, according to CEO Jeff Gennette. Meanwhile, it plans to expand its Backstage off-price chain and turn private labels like Alfani and Inc into billion-dollar brands.

And in perhaps its biggest departure, Macy’s also plans to open small, freestanding shops in affluent suburbs. Instead of relying on malls — and their food courts — to draw customers, the new stores will woo shoppers with upscale brands like APL and Billy Reid, beauty shop-in-shops and the ultimate lifestyle signifier: a locally-sourced café that serves breakfast, lunch, coffee, craft cocktails and beers, and yes, fresh cheddar from a nearby farm. 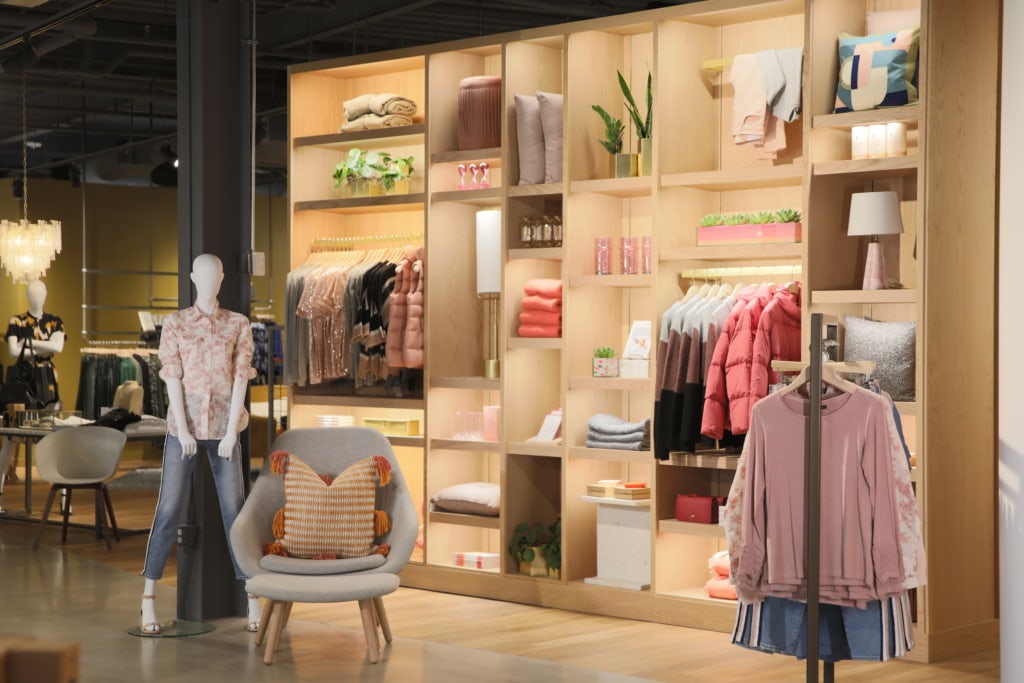 The apparel section of Market by Macy's | Source: Courtesy

Macy’s needed to shake up its retail mix, analysts say. The chain has relied too heavily on ageing, traditional department stores inside suburban malls. Many of the brands it sells are available for cheaper online, and big-box rivals and off-price retailers alike have invested heavily in building competing fashion, beauty and home goods businesses. In 2019, Macy's sales reached just over $24.5 billion — down from $27.1 billion in 2015. The company’s shares have plunged over 70 percent over the last five years.

Macy’s isn’t the first US department store that has turned to off-price and small-format shops as Americans make fewer trips to the mall and the hulking multi-brand establishments that anchor them. Nordstrom introduced its inventory-free Local concept in 2017, where customers can sip lattes while trying on online orders or having their clothes tailored. Nordstrom, Saks Fifth Avenue and Neiman Marcus all operate discount chains where they can discreetly shift unsold inventory.

On Wednesday, Macy’s shares rose 6 percent to $17.45. Analysts said Macy’s plans are a move in the right direction, though the chain has been slower than some of its rivals to adapt.

Still, a buzzy experiential concept will hardly have an impact on Macy’s bottom line.

“This is not the future of Macy’s,” said David Swartz, an analyst at Morningstar Research Services LLC. “The future of Macy’s is in their remaining [approximately 400] stores ... As we’ve seen in the past few years, the market could still change drastically, and the trends that hurt Macy’s are not disappearing.”

Attracting shoppers back to Macy’s will be a long-term challenge. Many of today’s trendiest brands sell directly to consumers online and rely on Instagram to get the word out about their products, bypassing department stores entirely. Macy’s previously embarked on a round of store closures in 2016, with plans to shutter 100 locations; the announcement this week indicates the chain underestimated the rate of sales decline at the time.

Market by Macy’s will attempt to reel in shoppers by promising a curated selection tailored to local tastes, plus in-store experiences that can’t be replicated online, such as wine tastings, book signings and jewellery making classes. All of these features will be stuffed into roughly 20,000 square feet, or about 12.5 percent the size of a typical Macy’s department store. The first location, in a suburb of Dallas, opens Thursday.

The task was to create a physical experience that will be relevant five, 10, 15 years from now.

The new concept is being led by Rachel Shechtman, who has served as Macy’s brand experience officer since the chain acquired Story, the store she founded in 2011 that offered a new selection of themed brands and products every couple of months. The original New York store closed last year, though Macy’s has opened versions of the concept inside 36 of its locations.

“The task was to create a physical experience that will be relevant five, 10, 15 years from now,” Shechtman told BoF. “How can you be community-centric, not just in your approach and merchandising but in the design of the business model? How can something be responsive and adaptive, but scalable?”

As Market by Macy’s enters new cities — at its annual investor conference Wednesday, Gennette highlighted Washington D.C., Dallas and Atlanta as areas to test out “off-mall” offerings — about 30 percent of merchandising and design will be tailored to local preferences. The restaurant in the inaugural store outside Dallas, for instance, features a menu designed by local food writer Leslie Brenner.

The shop also touts a 1,000-square-foot skincare-focused beauty space called Getchell’s Apothecary, which will offer brands like Estée Lauder, Kiehl’s and Vintner’s Daughter. Market will feature its private label apparel and home goods brands. Private label will be a huge part of Macy’s new three-year strategy, Gennette said Wednesday. The goal is to grow its four largest brands, including Alfani and INC, to $1 billion each.

“Macy’s has upsides: the expectations are extremely low and the company is in no financial distress,” said Swartz. “They’re in better shape than competitors like J.C.Penney and Gap Inc.”

Can the American Department Store Be Saved?