NEW YORK, United States — In Manhattan, little draws more envy than a spacious loft apartment so high up in the sky that light streams in from every angle. It was fitting, then, that Target chose such a venue to showcase its range of new brands, which have been developed in the hopes of elevating the big box retailer’s apparel and home offerings into something more aspirational than utilitarian.

Target has plans to introduce 12 new brands over the next two years, but the first three will begin trickling into stores in late August. That’s why, just a few weeks earlier, Target was playing house in a New York high-rise, racks filled with embroidered military and cropped tweed jackets (from the new women’s collection, A New Day) as well as clean-line button-downs (the star of its new men’s offering, Goodfellow & Co), which were positioned alongside a gleaming Danish-modern white enamel table, gold-tipped shelving and powdered-pastel bar stools courtesy of new home line, Project 62. In this instance, the bar cart may not have been filled with bottles of booze, but cocktails were still being poured on the regular.

“The idea is really around brands rather than labels,” explained Mark Tritton, Target’s executive vice president and chief merchandising officer, who joined from Nordstrom in June 2016. He was decked out in head-to-toe Goodfellow & Co, from white leather trainers to an olive-coloured cotton blazer. “Retail in the past has been very singular: big brands that cover a wide range of products and aesthetics. I think those days have passed.” 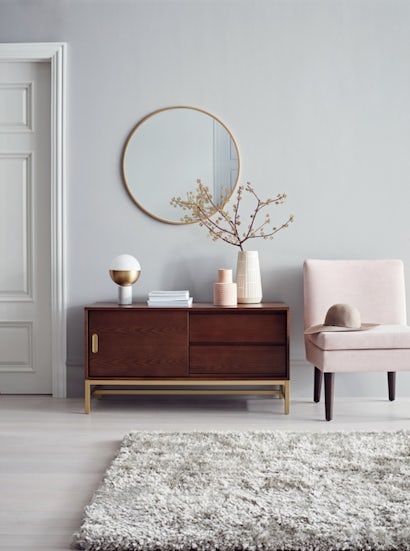 Whether or not consumers will agree is Target’s big bet. Competitors like Walmart and Amazon have each made “brand” a priority in their own way. Walmart, by acquiring brands like Bonobos and Modcloth; Amazon, by convincing majors like Nike to sell through its marketplace while developing in-house, if fairly generic, labels.

In the race to win over the new consumer, Target has decided that its reputation for being the stylish big-box retailer — with customers fondly calling it “Tar-zhay" — means that its in-house lines must be as covetable as the designer collaborations for which it has been known for nearly 20 years.

That requires phasing out tired in-house brands — namely, Merona and Mossimo — and filling the floor with these new ranges, which are competitively priced but have a clearer aesthetic focus. A New Day, for instance, takes cues from the floral embroideries and flouncy shirting so well-loved on the contemporary floor, while Goodfellow & Co plays into the Nordic-prep-style that has pervaded men’s departments for the past few seasons. Project 62 feels more akin to New York’s high-end home decor store ABC Carpet & Home than IKEA, although prices fall much more closely in line with the latter. In October, the retailer will introduce an activewear line, Joy Lab, with similar intent. And it recently launched Cloud Island, a baby collection.

Unlike Merona or Mossimo, these lines are not so broad sweeping. They are Target’s version of “niche”. Or, segmented offerings that are not meant to be everything to everyone, a concept that remains novel in the big-box world. Inclusivity comes by way of price and sizing. Most apparel items cost between $20 and $40, while the 1,200-piece home collection ranges from $3 to $700. Many pieces are available in sizes 0 to 26 for women, and “standard, tall, big, and big and tall” for men.

While A New Day, Goodfellow & Co and Project 62 were developed in just 10 months, Tritton did have a case study from which to cull insights. (As well as both hard data and customer feedback, which will be continually used in order to iterate on brand concepts and build new ones.)

The company’s Cat & Jack kids’ line, which was introduced in July 2016, replacing longstanding labels Circo and Cherokee, generated $2 billion in revenue in its first year on the floor. In retail parlance, Cat & Jack is now a “trip driver”, meaning that customers now come to the store on a frequent basis with the intention of specifically shopping that collection, and in turn shopping more across the entire store.

Target's key differentiator, then, could be these less-traditional bids for foot traffic. “Cherokee and Circa actually had positive comps back when we made the decision to change [and develop Cat & Jack],” Tritton said. “Who else is building a $2 billion brand in a year? It’s not happening. I think that’s the joy of what Target can do.”

However, the success of Cat & Jack does not ensure success all around. While children’s clothing retailers are having just as much difficulty navigating market shifts as their adult counterparts — industry leader Gymboree filed for Chapter 11 bankruptcy protection in June, announcing the closure of 350 stores just a month later — there are also fewer dominant players. Especially when compared to women’s apparel. Target is not only competing against Walmart and Amazon for consumer dollars, but also against an incredibly crowded market that includes fast fashion, specialty retailers, department stores and online-only outlets.

There are other ways, of course, that Target is attempting to better position itself. Chief executive Brian Cornell’s $7 billion turnaround plan, first introduced to investors in February, includes refining the consumer’s digital experience, transforming the stores both aesthetically (with more stronger visual merchandising) and by turning them into mini-distribution centres and opening small-format stores in cities. In August, Target acquired San Francisco-based software company Grand Junction, which manages local and same-day deliveries. 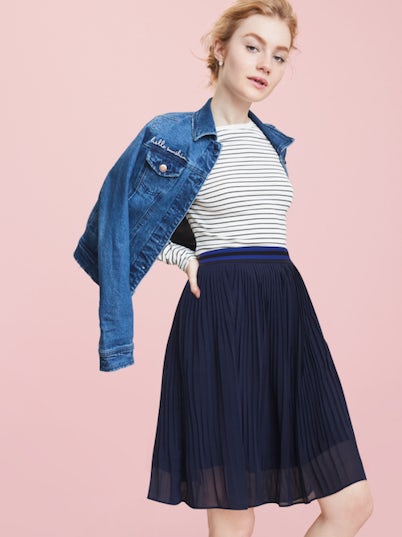 Early signs that this new approach could be the right one are cautiously promising. In the second quarter of Target’s 2017 fiscal year, sales at stores open at least one year increased 1.3 percent, with foot traffic up more than 2 percent. Online sales were up 32 percent year-over-year. Net sales were $16.4 billion, up 1.6 percent from $16.2 billion in the same period in 2016.

In that same quarter, Target allocated $717 million to capital investment, which has resulted in a drop in net income. Earnings before interest and taxes (EBIT) were $1.1 billion, down from $1.24 billion during the same period last year.

"We do not criticize the bottom line squeeze," Neil Saunders, managing director of GlobalData Retail, said in a recent note. "We believe it is entirely necessary for Target to invest and evolve."

And yet, none of those improvements will be of use unless the product that populates the stores moves fast. "Longer term...the acid test will be whether Target's investments result in a sustained and significant upswing in sales," Saunders said. "The early signs are good, but there is a lot more work to be done."

The cadre of new brands being introduced in apparel and home, two of the retailer’s most profitable categories, will be responsible for a lot of that work.

"Not only are these brands credible and compelling, but they are also helping to differentiate Target from rivals," Saunders said. "Our only criticism is that Target does not always do a good job of showcasing these offers in store, although we accept this is something the group is in the process of remedying. The future introduction of new brands in other areas like adult apparel and homewares should help to drive performance further."

As for how Target’s one-off collaborations will fit into the mix, Tritton acknowledges that the formula may need some jazzing up. While the company said its Victoria Beckham for Target collection, which hit stores in April 2017, was its best-selling collaboration ever thanks to better management of inventory than in the past, future iterations might be less straightforward. Its ongoing collaboration with fashion media brand WhoWhatWear is an example of a newer approach. There are also opportunities to develop partnerships with single brands instead of Target as a whole. (i.e., Goodfellow x Insert Emerging Menswear Designer Here.)

“Look, the market is very different 20 years on,” Tritton said, noting that 2018 will mark two decades of collaborations at Target. “We’ve got some things planned next year with a different twist. There are some things we’ve talked about doing inside the brands. More little punch points.”

And while Target is focusing on its home-grown brands for now, it’s not ruling out the acquisition route. “When we look at a white space, we go through a filter: do we create, do we acquire, do we partner?” Tritton explained. “There are a number of great brands out there that we would look to potentially acquire if they still have brand equity... It’s not off the radar for us. But in these niches, there was nothing that spoke to us that we felt was very relevant.”

Can Jet.com Take a Bite Out of Amazon Fashion?