From Crocs to bumbags and Birkenstocks, universally ugly ‘It’ accessories have been rebranded into the cult items of the season. BoF explores why ugly fashion sells.

From Crocs to bumbags and Birkenstocks, universally ugly ‘It’ accessories have been rebranded into the cult items of the season. BoF explores why ugly fashion sells.

LONDON, United Kingdom — Ugly fashion is nothing new. From Prada’s signature jolie laide to Céline's riff on the Birkenstock sandal, fashion has always had a thing for transforming the uncool into the covetable. However, with high-fashion Crocs collaborations and luxe bumbags hitting shelves, this season it seems the trend has reached its apotheosis: the uglier the item, the higher the social-media status.

Gucci’s luxe reinterpretation of the bumbag — the highly unfashionable, utilitarian clip-around pouch normally associated with Western tourists as a means of keeping valuables safe — currently makes up nearly a quarter of all belt-bag sales on Net-a-Porter, while Balenciaga’s triple-soled sneakers completely sold out within hours. Why? Not only do these items deliver quirk, they're also practical, functional and, more than anything, they’re comfortable.

And comfort sells. Some brands, like Ugg, Birkenstocks and Crocs, have built entire businesses on comfort-driven, ugly products. Revenues at Ugg surpassed $400 million in the second quarter of 2017. Business at the Colorado-based Crocs has been fairly consistent for years, hovering around the $1 billion to $1.2 billion mark annually since 2011. Fashion trends are cyclical, so fashion don'ts will always return — but they're far more likely to have longevity if they're easy to wear. 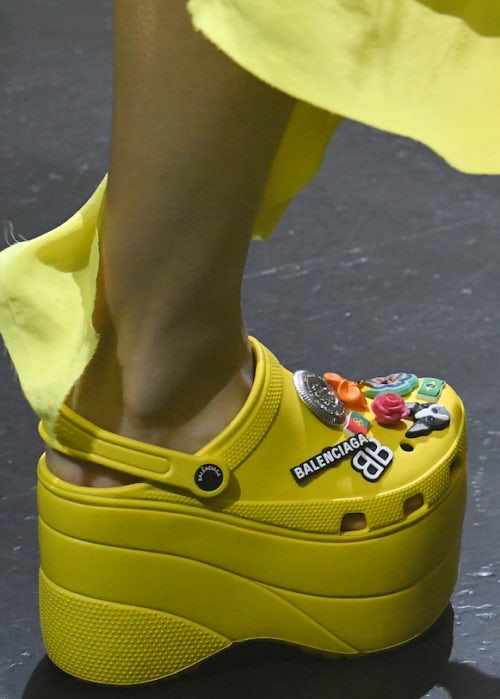 The consumer appeal is understandable: a belt bag doesn’t need to be carried, sneakers are easier to get around in than heels and high-rise jeans don’t slip down like low-rise ones do, so underwear is never at risk of being on show.

Designers benefit from peddling their own luxury versions of these ironically cool items not only to feed consumer demand for the Instagram-worthy, but because carryover styles make good business sense. They are often cheaper than the typical pair of luxury shoes — Christopher Kane's Crocs retail for £475 ($623 at current currency exchange) where his other footwear costs upwards of £600 ($791) — serving as a new sort of entry point into a high-end label that deviates from the typical fragrances or key fob.

“There’s a veneer of practicality to all of this — it’s almost a badge of honour, taking something from the fringes of fashion and raising it to the height of style,” says Coco Chan, head of womenswear at Stylebop. “It’s the essence of cool and in the age of social media that’s a very powerful thing.”

Footwear is often the gateway drug for ugly fashion. Collaborations between Vetements and Reebok have produced grotesque "genetically modified" sneakers reminiscent of the sticky goop that fills the Upside Down on the Netflix hit series "Stranger Things." Balenciaga’s triple-soled sneakers — crafted using moulds taken from running, basketball and track shoes — sold out on Stylebop.com within an hour of going live. Rarely is there the equivalent demand for a pair of heels. The Vetements x Reebok sneakers sold out almost instantly; the Vetements x Manolo Blahnik crotch-skimming boots — replete with stiletto heel — did not.

The path from fashion pariah to "It"-dom, is one already well-trodden by Birkenstock. The tide began turning for the brand in 2012 (thanks, in part, to Phoebe Philo’s interpretation at Céline), and Birkenstock — once reviled as hopelessly dowdy — has revved up its fashion projects and aesthetic ever since, with new releases that include sandals with furry cowhide uppers and shearling-lined soles. Its continued success is proof that the ugly-yet-comfortable footwear trend has (orthopedically-supported) legs: last year, the brand tripled its revenues to €750 million ($800 million).

There is no getting around it, Crocs are ugly. It’s a bonus that they are so comfortable, that’s the whole point, that’s their charm

This year it unveiled the Box Project, a touring retail space with limited-edition styles. When it arrived at Barneys in New York, it attracted thousands of new customers to the store: 30 percent of visitors to the Box were new to Barneys. "An edgy Millennial in New York or London now loves the same style as a 60-year-old teacher in Germany," says Yvonne Piu, chief marketing and product officer at Birkenstock. "Sneakers have become both ubiquitous and collectable, and Birkenstock speaks to the same desirability. Once someone understands the logic behind the footbed, he or she looks at it in a different way."

But it's not only that bastion of hippiedom that has benefited from fashion's love of the unsightly. “There is no getting around it, Crocs are ugly,” says Christopher Kane, who has collaborated with the brand since Spring/Summer 2017. “It’s a bonus that they are so comfortable, that’s the whole point, that’s their charm. I like that they’re not designed to be feminine or flattering. My sister wears them in her garden.” 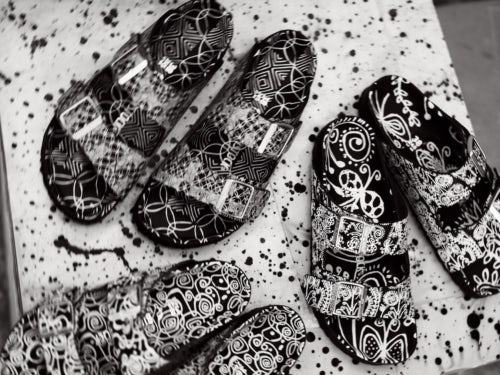 Kane’s Crocs come with removable trinkets and “jibbitz” — scintillating brooch-like gemstones that pierce through the rubber upper like earrings — and this season he also created a fur-lined version that currently retails at Farfetch. “They’ve been a great success, hence why I have kept them in the last four collections,” he says.

It isn’t the only ugly footwear trend that Kane helped kick off. In 2011, the designer caused a minor uproar when he sent the ever-practical pool slide down the runway. “I was really criticised for bringing ugly shoes to luxury fashion,” says Kane. “Today, every significant brand has a best-selling pool slide.”

While Crocs won’t confirm whether collaborations have boosted sales, they have certainly opened wholesale doors at more fashion-focused retailers like Farfetch and MatchesFashion.com. It's crucial for growth: such is the indestructible power of the clog, Crocs has boasted that they last a lifetime — a customer need only buy one pair. “Working with fashion designers allows us to tap into the excitement and energy that comes from unexpected partnerships,” said Michelle Poole, senior vice president of product and marketing at Crocs.

To be sure, ugly fashion isn't entirely immune to shifts in consumer behaviour. While Crocs has seen its fashion quotient rise, fourth quarter 2016 revenues at the brand hit $187.4 million — a 10 percent decrease on the same period last year. (The company cited falling sales and underperforming stores for the downturn in revenue — the company will close 158 outlets to "remove unnecessary complexity from our business [after] conducting a comprehensive review of our cost structure".)  "We haven't lost sight of who we are though — a brand that delivers comfort and good value," Poole said. "It will never be our intention to move away from our core customer — the mom, the beach-goer, the gardener." 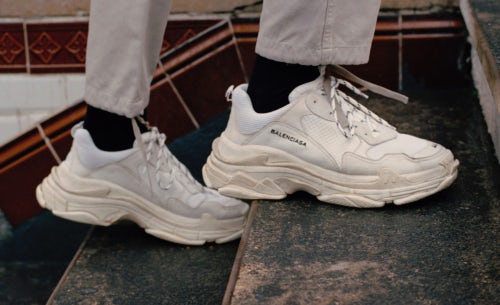 Meanwhile, so-called “mom” or “dad” jeans — high-waisted, straight-leg styles — continue to top consumers shopping lists, thanks, in part, to what Karyn Hillman, chief product officer at Levi’s, calls the “near-now nostalgia.” So many women were buying vintage mens Levi 501 jeans that Levi’s created the ‘Wedgie’ jean to capitalise on demand, with a high-rise but tapered waist to be more flattering to the female form. It’s a smart business move: most women were purchasing vintage Levi’s from second hand stores, but through the Wedgie, Levi’s is able to benefit itself from that consumer spend.

Vetements was also savvy in that arena. Its deconstructed jeans are crafted from two pairs of vintage Levi’s that the brand buys for €30 per pair ($35): the jeans, which take six hours to be remade in Paris, retail for over £1,000 ($1,319). The jean was so popular that Vetements had a team dedicated to sourcing old stock: after buying up all the pairs in France, the team had to look further afield.

“It’s a testament to the demand for '90s and nostalgia right now,” says Candice Fragis, buying and merchandising director at Farfetch, which has reported a spike in bumbag sales. The hands-free element of the bumbag’s design — known as the "fanny pack" in the United States — has meant that for years it has been popular with the festival-going crowd. Fast-fashion e-commerce giant Asos currently stocks over 100 versions. The site sees sales peak during the summer months; similarly, on Google, "bumbag" was most frequently searched from May onwards this year, reaching a five-year peak in August.

Off-White and Gucci have reimagined the style with plush fabrics that include nappa leather and velvet, and the pouch has undergone a luxe rebrand as the "belt bag." On Net-a-Porter, the Gucci belt bags “have been extremely popular, selling out in just two days,” says Lisa Aiken, the retailer's fashion director. Capitalising on the product’s success, Gucci has over 20 styles currently available on its own e-commerce site. 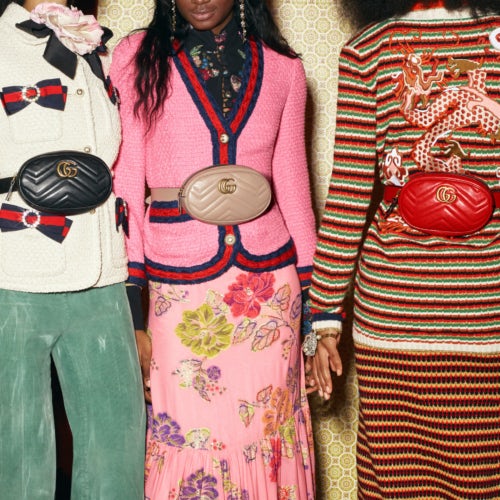 So important are these items to a brand’s sales that designers are adapting designs for extra comfort. Levi’s wove one percent of elastane into the denim fibres for the Wedgie jeans, while the Reebok x Vetements Instapump has an internal inflation mechanism, making them lighter than most sneaker styles. Hi-Tec’s chunky sneaker uses “Vibram technology never seen on the market, with an innovative midsole and outsole combination that reduces muscle fatigue and is designed to be lightweight,” says Dave Hendricks, the company's sales director.

Some ugly items, however, are designed purely to incite social media attention. Balenciaga’s version of the Crocs — which come in neon pink and yellow and are covered in cartoon brooches, with a mega 10cm platform sole — were likened to a meme by many for their ridiculous novelty. So newsworthy was the shoe that BBC News in the UK even covered it. In today’s social media-driven world, Balenciaga putting a Crocs clog on its runway is a far more effective marketing tool than any advertising campaign. And yet, the style has been picked up by MatchesFashion.com — the first time the luxury e-tailer has ever stocked Crocs.

“Now Balenciaga has collaborated with Crocs, perhaps they won’t be as shocking or controversial any more,” says Kane. “I think there’s life in the Crocs clog. The power of ugly combined with function can’t be undermined.”

How Mid Heels Became The Cash Kitten Of Footwear

A Chip Off The Old Croc: The Ugly Shoe Is Back