LONDON, United Kingdom — Jane Birkin wasn’t French by birth, but nonetheless perfected the distinctly Parisian blend of sexy tomboy insouciance after moving to the country in the late Sixties. Now, the wave of French contemporary brands which rose to success in Europe at the beginning of this decade with luxury-like branding fused to slick, fast-fashion-like operations, subsequently becoming cornerstones on more fashionable high streets, are betting that consumers across the world, especially in the US and China, will want to pull a Birkin, without the complexity of actually moving to Paris.

“Isabel Marant very much inspired the look, but she is a luxury designer and these brands have a positioning that is very different to her brand,” explains Pierre-François Le Louët, president of the Fédération Française du Prêt-à-Porter Féminin. “The first generation of these brands, such as Maje, Sandro, The Kooples, Zadig & Voltaire and Claudie Pierlot, are experiencing most of their development in the US and China. In the US, it’s mostly through department stores and in China, it’s their own retail locations.”

“Our brands have this Parisian-chic value that translates into being highly desirable brands in the US and around the world,” says Daniel Lalonde, president of SMCP, the French group that owns Sandro, Maje and Claudie Pierlot. “We take the codes of luxury, which is a very strong creative process led by an artistic director, studios, pattern makers, as well as campaigns with great photographers, models, and provide an environment that is very similar to a luxury house, and our store locations are typically very close to the luxury brands in the best streets and department stores in the world,” continues Lalonde. “We will also take strong codes from fast fashion, which is that we have very quick product development cycles.”

Four years ago, sales outside of France generated only 28 percent of SMCP’s total revenue. Last year, it was closer to 60 percent. SMCP’s brands are now present in 36 countries. So is The Kooples. Zadig & Voltaire has outlets in 35 countries. But international expansion has not come without challenges.

The Parisian style forms the basis, but it has definitely moved on.

The Kooples launched in 2008 with a concept revolving around Parisian couples and now creates 12 collections a year to the tune of roughly $31 million in annual revenues. “It’s not see-now-buy-now, but buy-now-or-you’ll-miss-it,” explains Nicolas Dreyfus, co-founder and CEO of The Kooples. But the brand ran into serious trouble with sizing when it entered the US, with many American consumers complaining that its products were too small.

“When we penetrated the US market in 2014, we were not aware of the big difference in sizing and we made a mistake as we had very fitted suits,” acknowledges Dreyfus. “We kept the same sizing until 18 months ago when we changed the sizing. We launched the e-commerce website a year ago and people were returning clothes mainly because it was too small. Now we have sizing to match American expectations and we don’t have a problem.” (He adds that the brand is set to launch a collection of ten bags in September, estimating that within three years bags will account for 20 percent of the business). 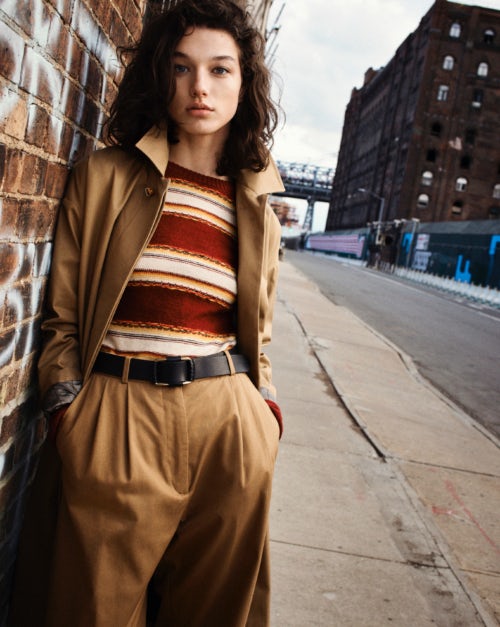 The aesthetic shift away from a “skinny” silhouette, complete with boxy blazers and leather biker jackets, has also posed challenges, but is seeping into the visual output of these brands, as they evolve to keep up with consumer demand. Heather Gramston, womenswear buying manager at Selfridges, says the look has softened from its original incarnation. “The Parisian style forms the basis, but it has definitely moved on,” she says. “It was once blazer, leggings and a cotton white shirt. Now it’s softer and more about silk shirting, subtle prints and a bomber jacket instead of a blazer. What underlines all of them is referencing that Parisian elegance and wardrobe staples.”

There's also budding competition from a new generation of French mid-market brands, currently led by Sessùn, a Marseille-based label that offers simple and feminine clothes, mostly below $200. “French girls are taking more care with their appearance and style,” says Emma François, who founded the brand in 1996 and has been growing the business step-by-step. “Style is more defined and more precise.” At the moment, the brand’s biggest markets are France, Germany, Belgium, the Netherlands and Spain.

Then there's U.N.X, a Paris-based contemporary label designed by 28-year-old Hedi El Chikh, which combines the 1950s heritage of what the French call tailleur (structured tailoring) with fluid fabrication, comfortable fit and accessible pricing. Sweatshirts and polo tops start at $170; an a-line skirt with a martingale back is $240; silky dresses are between $285 and $400; and the most expensive items are the Korean wool-stretch coats, which go up to $970, still cheaper than the most expensive items at Sandro, Maje and Zadig & Voltaire. It couldn’t be further from the biker jackets and tight tailoring of yesteryear, which is perhaps why it was picked up for a two-season exclusive at Galeries Lafayette in Paris.

“We are living in a moment where women in particular are wearing leggings and hoodies and pairing it with heels,” said El Chikh, who spent five years working for Azzedine Alaïa. “That’s how they get dressed; they don’t want to think too much and they want to be comfortable and show off their bodies. It is the current epoch.”