As a growing number of established and start-up brands grapple with what it means to operate responsibly, one New York flip-flop company is testing its own model.

As a growing number of established and start-up brands grapple with what it means to operate responsibly, one New York flip-flop company is testing its own model.

NEW YORK, United States — At Tidal New York’s New Rochelle factory, a roughly 30-minute train ride from Grand Central Station, a robotic arm is shooting a blue goo into flip flop-shaped moulds. The mix looks like a foamy pancake batter, and the process is not unlike a waffle iron.

Production Manager Adam Avenia eyeballs each of the flip flop soles as they come off the machine, checking that the formula he’s responsible for mixing each day is resulting in the right quality and consistency.

It’s a particularly tricky operation on this January morning because Tidal is experimenting with a new recipe, a delicate mix of its standard polyurethane base and a renewable material that could represent a breakthrough in the company’s ambitions to improve the environmental impact of its products.

“What Adam’s not saying is he’s a magician,” says Ben Dunmore, Tidal’s creative director, as Avenia peels a perfectly formed pale blue sole from its mould. “This is not standard.”

The operation at flip-flop company Tidal is part of a quiet revolution in the footwear sector, as a growing number of brands look to rethink the way shoes are made and their businesses operate.

It’s a shift gaining traction throughout the apparel industry — an effort to adapt to mounting consumer interest in products that are less harmful to people and planet, and a gradual evolution in thinking around what makes a good business.

Companies like Allbirds and Veja have risen to prominence with the promise of shoes produced in a more environmentally and socially responsible manner, without compromising on style. Last year, Adidas launched a new sneaker designed to be recycled over and over again. Nike’s Space Hippie, which will launch in the spring, was designed to have the lowest carbon footprint of any Nike shoe by using a large proportion of waste and recycled materials.

While the majority of footwear is still made in a traditional manner, the rise of alternatives is important because shoes represent one of fashion’s most intractable problems from a sustainable design perspective.

This is not standard.

They are a complex product, generally made up of multiple materials and often glued together, making them difficult to recycle. Their main components, leather and plastics, both have a hefty environmental footprint. And just like apparel, the industry has been plagued by labour rights issues within the supply chain, and problems with harassment and bullying at corporate headquarters.

But as a growing number of established and start-up brands grapple with what it means to operate responsibly, Tidal offers insight into the opportunities and challenges presented by one potential pathway.

Tidal’s origin story is a familiar one in the world of upstart fashion brands with an ethical bent: after years working in the footwear sector, brothers Tim and Thomas Gibb became disillusioned with what seemed like a broken business model.

“There were major issues on multiple fronts. It wasn’t comfortable to walk into the dorms on factory grounds and feel good about what I was doing,” Tim Gibb said. “We were negotiating massive production volumes, where if you saved a dollar on a long-running style, you could save the company hundreds of thousands of dollars, but … at what cost?”

The brothers bear their own scars from the industry. In 2018, Thomas sued American luxury conglomerate Tapestry and former Stuart Weitzman creative director Giovanni Morelli on grounds of sexual harassment. Tapestry counter-sued, claiming Gibb violated his employment agreement through his involvement with Tidal. Both cases have now been dismissed, according to the public record.

Having experienced these issues firsthand, the brothers also saw a business opportunity to do things better. As they geared up to open their own factory in 2015, the industry was facing a myriad of pressures. Fashion was stuck in a race to the bottom, with brands struggling to keep up with an increasingly fast-paced trend cycle while managing a convoluted and extended supply chain. Conversations around reshoring, and swift-to-market local supply chains, were gaining traction.

“[American manufacturing] was very top of mind and retailers were interested in it,” Gibb said. “We believe in the decentralisation of the manufacturing source and creating these more local economies based around more local manufacturing.”

Shoes represent one of fashion’s most intractable problems from a sustainable design perspective.

Flip flops presented an interesting starting point: they’re ubiquitous, and unlike most shoes, they don’t require multiple parts or materials. They don’t need to be stitched or glued together and that means production efficiencies that can help offset the higher cost of manufacturing in America. Often, they’re cut from sheets of squishy rubber-like plastic. Tidal isn’t the only brand looking to disrupt this model with a more eco-friendly alternative.

By setting up a factory within commuting distance of retail partners in Manhattan, the brothers hoped to tap into what seemed like a burgeoning market for locally-made products that would allow retailers to swiftly respond to trends, and hopefully create a virtuous cycle of reduced waste and overstock.

From Launch to Crisis

The brand launched in 2015 with $5.5 million in funding, largely in the form of a loan from the Small Business Administration, with the rest made up by friends and family.

It set up shop in an old tambourine factory in New Rochelle and scoured the country to find a US-based chemical manufacturer. They acquired machinery and hired a specialist to figure out how to create a better quality, lower waste product by casting temperamental low-density polyurethane in heated moulds. The factory focused on providing employment and opportunities for veterans, who make up 70 percent of the workforce.

It was terrible timing: Tidal launched into a retail downturn that has decimated malls and high streets across America and Europe.

The brand had bet big on retail partnerships, pouring its funds into R&D, machinery and people with little left for marketing. The strategy had been to lean on department stores and retailers to help tell the story. It relied on those partners remaining solvent.

“When the bottom fell out of retail, it was a bit of a crisis,” Gibb said. “We didn’t have a lot of runway, and we needed the money to prove the concept at scale.”

At the same time, the brand’s big bet on Made in America proved a double-edged sword. With the election of Donald Trump in 2016, the wholesome appeal of US manufacturing became increasingly politically loaded. Meanwhile, the vaunted return of factories and production has hardly materialised, despite trade tensions, tariffs and now coronavirus concerns.

When the bottom fell out of retail, it was a bit of a crisis.

Though high-speed, high-quality local manufacturing still holds buzzy appeal, the reality has failed to match brands’ ambitions. Last year, Adidas announced it would shutter two factories in the US and Germany that represented a high-profile experiment in new local manufacturing. According to consultancy Kearney, imports of manufactured goods into the US from the 14 largest low-cost country trading partners in Asia rose 9 percent in 2018. US gross manufacturing output only rose 6 percent. Kearney’s annual reshoring index has decreased three years in a row.

By 2016, things looked grim for Tidal. The brothers considered packing it in and cutting their losses. Instead, they found an angel investor and poured their remaining funds into a marketing overhaul and a strategic pivot to direct-to-consumer sales. Last year, they went dark.

When the brand relaunched in December, it was with a tighter marketing narrative and an improved product. It boasted 13 percent renewable materials in its shoes for the first time, and a commitment to continuous improvement. 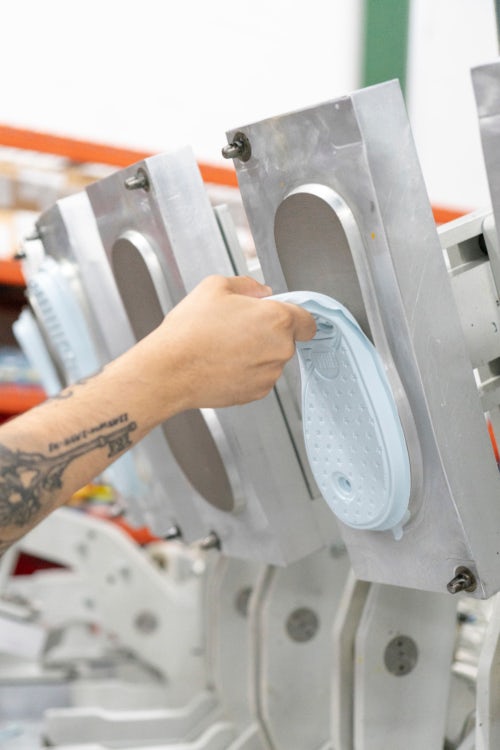 The new formula Avenia was experimenting with in January could push that ratio up to 20 percent and help the brand keep ratcheting it higher by switching out sticky castor oil for biochar, a charcoal-like substance Tidal’s supplier sources from agricultural and municipal waste.

Still, challenges remain. Tidal is actively researching alternative materials for its straps and better pigments for its inks. It has only just found a recycling partner that will convert old Tidal flip flops into foam padding that can be used in public works projects. That too is a partial and imperfect solution. It’s a step along the way to the company’s more ambitious goal to create a biodegradable shoe, a reflection on the fact that recycling infrastructure remains highly limited and many pairs will still end up in landfills.

“Our goal is to replace petrochemicals,” Gibb said. “If we’re not able to get 100 percent of the petrochemicals out, we wanted at least to be at a point where it’s 100 percent biodegradable in a landfill setting as quickly as possible.”

At the New Rochelle factory, a giant American flag dominates the back wall, presiding over a pristine expanse of poured concrete sparsely populated by industrial machinery that periodically whirrs and hisses. Racks of neatly stacked flip flop soles sit ready for printing on the company’s digital UV printers that use special patented technology to transfer the ink with less waste and pollution than traditional screen printing.

Our goal is to replace petrochemicals.

And when it comes to creating buzz and generating cool-factor, Tidal is betting on the sweatpants effect: if something as utilitarian and every day as sweatpants can be fashion, so too can flip flops. Models back-stage at New York-based label Jonathan Cohen’s last two runway shows received customised pairs.

Month-on-month sales have grown 100 percent. With two shifts, the brand can make 500 pairs a day. It is on a path to break even by the end of the year. From there, the brand can keep scaling, but Gibb insists the focus will remain on keeping a balance between growth and social and environmental commitments.

“We believe we can be a model people can look at as having potential,” Gibb said. “It’s a different world now; we were a novel concept in 2014, and now people are seeing us as a necessary concept.”

Related Articles:
Made in the USA: Dead or Alive?