Karlie Kloss and David Lauren sat down with BoF’s Imran Amed at the Fast Company Innovation Festival to discuss how innovation can work for both a global brand and passion-driven start-ups.

Karlie Kloss and David Lauren sat down with BoF’s Imran Amed at the Fast Company Innovation Festival to discuss how innovation can work for both a global brand and passion-driven start-ups.

NEW YORK, United States — Is there anything more essential to sustaining a business than constant, thoughtful innovation? And how do successful brand leaders and entrepreneurs execute ideas across a variety of industries and scale? These are just a few of the questions being posed this week at Fast Company’s Innovation Festival. In a double feature yesterday evening at NYU’s Skirball Stage, BoF’s Imran Amed sat down with David Lauren, the newly titled vice chairman and chief innovation officer at Ralph Lauren, as well as model-entrepreneur Karlie Kloss to discuss how innovation and motivation work for both a global brand and passion-driven start-ups.

Discussing for the first time at length his new role at his father’s namesake company, Lauren stressed remaining nimble even within a massive global operation and listening closely to the customer as well as employees at all levels. “It’s about the entrepreneurial energy but you have to think small. Each team is actually just a handful of people,” he said in explaining how new ideas are encouraged and test-driven company-wide. 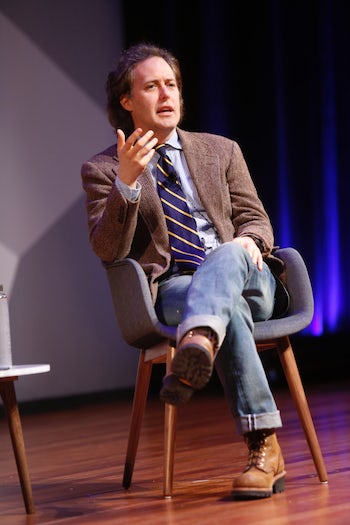 With the Ralph Lauren brand making headlines regularly in the last year, notably for the hire of a new president and chief executive officer, Stefan Larsson, formerly of H&M, and the announcement of a restructuring plan aptly titled The Way Forward, Lauren’s new role could not have come at a more critical juncture.

Lauren spoke in detail about the company’s recent decision to switch to a fashion immediacy model, which meant upending supply chain, merchandising, and design schedules. Lauren admitted the plan took just a month to conceive and execute. His plan for innovation going forward at Ralph Lauren, which soon celebrates 50 years in business, is two-fold: listen and learn … “oh and world domination,” he offered with a laugh.

If any one model in the business is on her way to world domination it is Karlie Kloss. The 24-year-old Vogue cover star and L’Oreal spokeswoman dished on her two passion projects: cookies and coding. The former was borne out of a close relationship with her grandmother, who taught her to bake. A partnership with chef Christina Tosi developed this interest into a cottage industry (Karlie’s Kookies). “Because it is something I love to do, not something I have to do, that keeps me excited and motivated,” she says explaining how she fits a side business with her already jam-packed work schedule.

As for coding, Kloss says, “I had a curiosity about tech but I couldn’t understand what exactly they were building. What was the secret language?” So she took a class on coding to learn. Two years on, she is sponsoring Kode With Klossy camps across the country that encourage young girls to learn more about the digital language just like she did. “It’s not just for guys in hoodies — no offense to the guys in hoodies — but anyone can learn this!”

The three things she says are the foundation of her success are: be true to yourself, go the extra mile, and doing it with cookies to share never hurt.

On whether she would she ever go into business with best friend Taylor Swift, she added: “Maybe I’ll teach her how to code. But right now she’s just my friend.”