How Selfridges Is Bringing Virtual Fashion to Stores

Fashion may be preparing for a future in the metaverse, but retailers still need to attend to today’s business of selling to physical customers, often in physical stores.

How Selfridges Is Bringing Virtual Fashion to Stores

Fashion may be preparing for a future in the metaverse, but retailers still need to attend to today’s business of selling to physical customers, often in physical stores.

For the next two weeks, visitors to the designer floor at Selfridges’ London flagship will discover a portal into a virtual city. It’s next to the escalators, for anyone looking.

The space is a pop-up in collaboration with Charli Cohen, a London designer of physical and digital streetwear, and Yahoo Ryot Lab, Yahoo’s content studio. Pokémon also lent its characters to the project in celebration of its 25th anniversary. It’s mostly there, however, to prompt customers to explore “Electric/City,” an immersive virtual environment shoppers can access in the store by scanning a QR code or visit online at home through a dedicated website. The collaboration also includes an array of products for sale, both physical and virtual.

The project is the latest example of how fashion companies and retailers are trying to bridge the divide between the real and digital worlds. Many brands are anticipating a future where they’ll meet more of their customers in video games and other virtual environments.

At the same time, fashion is still primarily in the business of selling actual clothing to customers with physical bodies, mostly through stores made of old-fashioned bricks and mortar. One solution is to create experiences that blend the two.

Selfridges, which has leaned heavily into creating engaging in-store experiences, is now looking to virtual ones as well.

“The whole theme of the project is merging the physical world and the digital world, and offering clients the choice to either buy the digital or the physical garment,” said Jeannie Lee, the womenswear buying manager at Selfridges who pushed to make the project happen. “That’s where the world is going now, where you have that choice of where you want to experience it.”

When BoF visited the pop-up, there were a few rails of clothing, a large printed backdrop styled after a dark cityscape, and mirrors with Pikachu emblazoned on them. A screen on a stand offered visitors their first view of the virtual world, and on another stand nearby was the QR code shoppers scan to go to the Electric/City site. On entering the digital world, you have the point of view of someone walking up steps and emerging into a crowded, rainy city centre, complete with neon ads and shoppers carrying Selfridges bags.

The in-store space is sparse, and the interactivity between digital and physical can feel limited without help from the store staff guiding customers through the experience. Sebastian Manes, buying and merchandising director at Selfridges, said the physical portion was a way to promote the digital experience, which is the core of the project. Lee added it was Selfridges’ first foray into this blending of physical and virtual and would learn from it.

Where the collaboration comes to life is inside Electric/City. Cohen, who designed it with Ben Thompson, head of partnerships for the Charli Cohen brand, said the aim was to build it out like a video game, giving visitors the feeling they were travelling through and interacting with it. 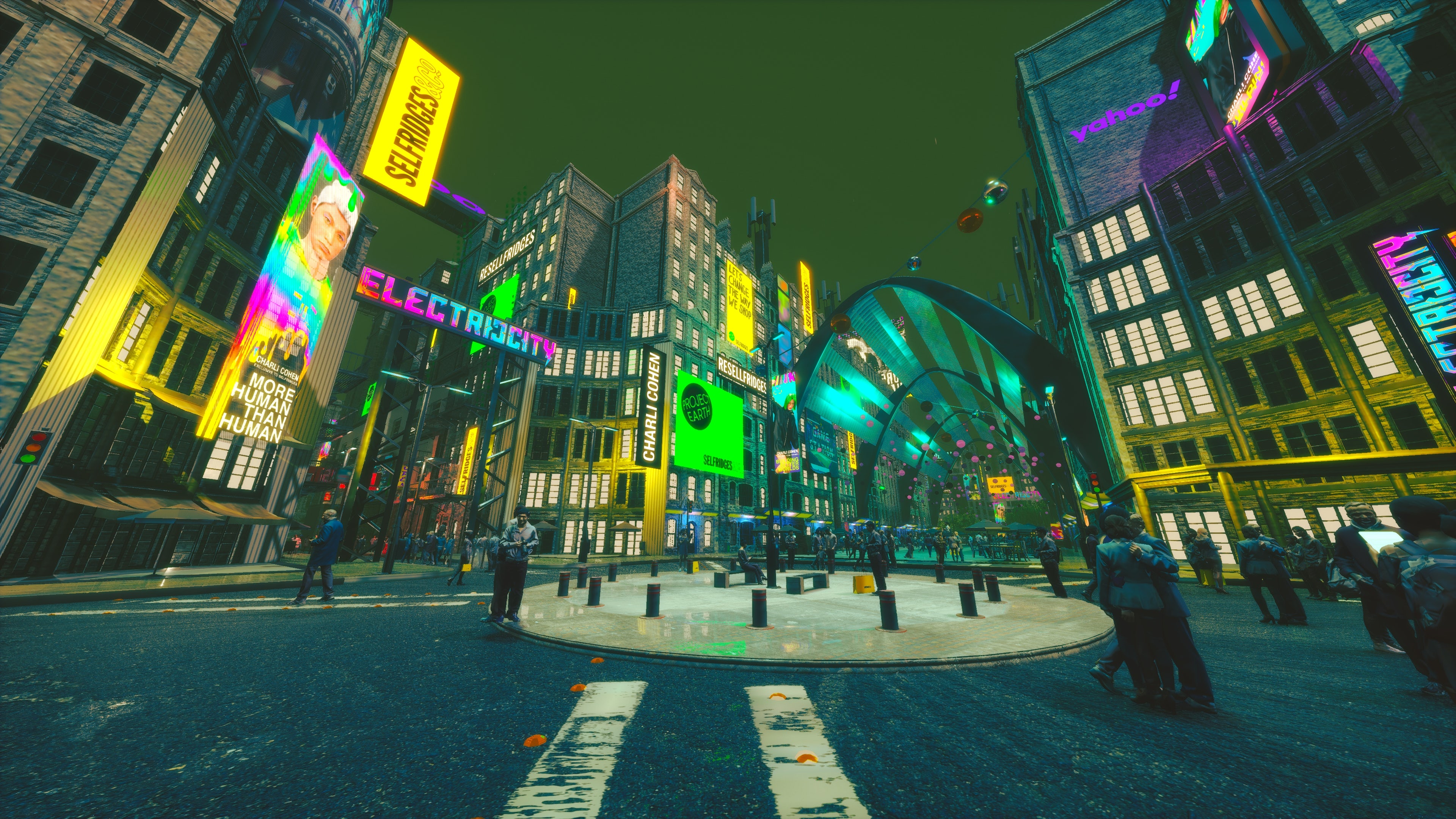 Walking around the virtual city. Yahoo.

To keep it user-friendly, though, moving through the virtual space occurs via video fly-throughs that whisk you directly to different areas, rather than leaving you to roam. The target audience for the project is all Selfridges’ customers, especially those who may be less familiar with immersive digital worlds. Cohen and Thompson also made sure the environment was accessible on mobile and in a regular browser window, without any sign-up or headset required.

Shopping is central to the experience. Beyond the products for sale in Selfridges, there are spots in Electric/City where visitors can purchase clothes from the Pokémon tie-up to be delivered to their homes. The clothes, which appear on models in Electric/City too, have their own digital layer.

“When somebody is wearing one of the garments, they scan the QR code and through Snapchat they’re able to activate this lens where Pikachu appears next to them in AR,” Cohen said, referring to augmented reality, which overlays computer-generated elements on the real world.

A separate collection of digital Charli Cohen garments is available for sale inside Electric/City. They’re enabled by ReadyPlayerMe, which lets users create a digital avatar from a selfie to use across more than 300 compatible games and virtual spaces, such as VRChat. They’re also AR-ready. A shopper in Selfridges who buys a digital item and creates an avatar can project it on their phone into the middle of the shop floor.

The pop-up in Selfridges and its extension in Electric/City is another step in fashion’s attempts to bridge the virtual and physical. When Balenciaga and Fortnite launched their recent collaboration, it included real and digital clothes, as well as a 3D billboard that appeared in key cities and within Fortnite. It featured the same assets in both, creating continuity from the game into real life.

Others have experimented in different ways. Gucci in 2019 started allowing shoppers to virtually try on sneakers using AR and introduced virtual sneakers for sale this year.

Letting users layer digital elements on themselves creates a “wow moment,” according to Sergey Arkhangelskiy, chief executive of Wanna, the technology partner behind Gucci’s digital footwear. The digital assets involved have to look sufficiently realistic, though, even if the imagery itself is outside the realm of reality, like a pair of sneakers that’s perpetually on fire.

“Anything that breaks the perception of realism, of this wow moment, it breaks the magic,” Arkhangelskiy said.

Matthew Drinkwater, head of the Fashion Innovation Agency at the London College of Fashion, said different immersive experiences can spark reactions that make shoppers feel more connected to a product or brand. But he added that to engage a specific community, such as the ones that exist around gaming, they need to feel authentic to work.

To that point, there are plenty of examples of forgettable tie-ins brands have tried. It may not be enough, for instance, to stream a runway show in a digital space and expect the community there to respond. It’s important brands spend time to understand the community or work alongside people who do, Drinkwater said.

The FIA played a small role in Selfridges’ collaboration. It wasn’t a partner but did help Cohen with the motion capture used for a scene of models dancing in Electric/City.

The rise of e-commerce has gradually changed the role of physical spaces in retail. Stores are increasingly acting as media channels, places for shoppers to connect with a brand as much as serving as sales outlets.

Lee said during the pandemic lockdowns, when many shoppers were unable to visit stores, Selfridges began thinking of ways to create immersive experiences online. But this pop-up is the first of what might become a recurring in-store feature.

“We are talking to Charli about making this an ongoing thing,” Lee said. Nothing is confirmed, but they’ve considered creating a permanent space Cohen could use for different projects, such as a gaming cafe, NFT art displays, and whatever else she might devise.