LONDON, United Kingdom — London is a gilt-edged global hub for art and commerce. An undisputed heavyweight champ. But it is now also a genuine tech contender, a rise up the ranks that has been rapid and more than a little unlikely.

When David Rowan, editor of Wired UK, launched his magazine in 2009, it was with some trepidation. “I was concerned we wouldn’t have enough stories about our own home-grown innovators,” he recalls. Indeed, compared to the home of the original Wired in California’s Silicon Valley, a mecca for international tech entrepreneurs, London’s technology community was small, unstructured and lacked the big-time venture capital funds that kept Silicon Valley flush with cash. Indeed, a previous attempt by Wired to colonise the UK digital scene, a joint venture with The Guardian newspaper, had lasted just two years, closing in 1997.

Venture funding in London dried up after the first dot-com boom’s bubble burst in 2000, the result of an investing frenzy in companies with no workable revenue models. One of the most spectacular failures was Boo.com, a fashion e-tailer, whose high-profile investors included Bernard Arnault, the Benetton family, JP Morgan and Goldman Sachs. The company burned through $188m in six months, before being placed into receivership in May 2000.

But only one month later, London gave birth to two start-ups that would, over the following decade, go on to redefine online fashion retailing as we know it: Net-a-Porter and ASOS. By 2010, when luxury conglomerate Richemont bought a majority of the remaining interest from Natalie Massenet and other founding investors, Net-A-Porter was valued at more than $500m. And earlier this year, ASOS, founded by Nick Robertson, reported that profits nearly doubled to more than £30m, on sales of almost £500m. ASOS is currently valued at more than £1bn on AIM, the London Stock Exchange’s international market for smaller growing companies.

With digital fashion success stories like these joining others outside the sector, “London has emerged as one of the most exciting technology hubs in the world and the pace here is only accelerating,” says Sonali de Rycker from Accel Partners, a top-tier venture capital firm. “Companies are clustering in areas such as the Silicon Roundabout,” she says, “and the cluster is attracting more talent, which is attracting more companies, creating a virtuous cycle.” 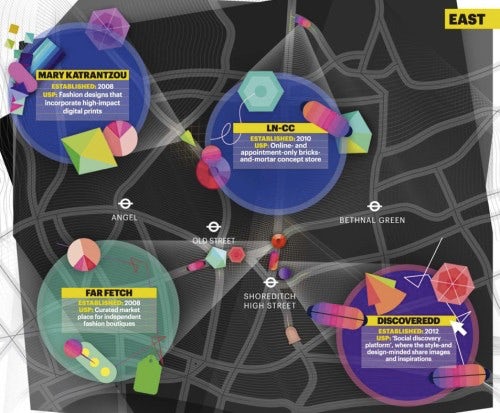 In Tech City — as the UK government has dubbed Silicon Roundabout, the East London area around the junctions of City Road and Old Street — the number of technology start-ups has grown from 15 to more than 300 in just three years. The area’s prominence was further bolstered by Google’s decision to open a seven-storey building there, providing the community with an anchor from one of the world’s leading technology companies.

What’s more, this bounce back in the technology sector has been matched by a new vibrancy and confidence in British fashion, at least on the creative front. First, Gareth Pugh, Erdem Moralioglu (given a leg-up by creative incubators Fashion East and Fashion Fringe, respectively) and Christopher Kane earned international attention, followed closely by Marios Schwab, Mary Katrantzou, Peter Pilotto, JW Anderson, and scores of other emerging designers.

In recent cycles, London’s rising technology and fashion sectors have intertwined, not least because East London is a magnet for both of these communities, offering, as it does, cheap warehouse space and vibrant nightlife. And as entrepreneurs, technologists and creatives have collided, they have begun to define a whole new growth vector for fashion business and creativity.

“Net-A-Porter is as much a technology company as it is a fashion company,” says Massenet. “I spend almost as much time with my tech peers at events, round tables and research labs as I do at fashion shows.” Digital technology has radically changed the way consumers engage with fashion retailers, but it has also altered the way some of London’s biggest fashion brands are defining themselves. “Digital communications is an integral part of our culture at Burberry, so in the end it touches everybody,” says chief creative officer Christopher Bailey, who has helped to rebrand Burberry as a luxury company for the digital age.

Designers like Pugh have been at the vanguard of online fashion film, another digital creative strain that started in London and quickly spread around the world. Pugh teamed up with filmmaker Ruth Hogben, a former assistant to Nick Knight, to create a number of striking films which have been projected onto huge screens in Paris, the ceiling of a 14th-century church in Florence, a loading bay in New York, and, of course, shared on the internet, helping to build a powerful buzz around the designer and his avant-garde work.

Of course, an essential part of any vibrant digital ecosystem is talent: engineering talent, developer talent, entrepreneurial talent, and — especially in the fashion world — design talent. London has a talent pool that is rich in all of these areas and particularly strong in terms of creativity and design, which are more important than ever before.

“We don’t have Stanford University, but we have Central Saint Martins (CSM) and we have the Royal College of Art,” says Rowan. “There has always been a cultural edge in London. Had the music industry survived, maybe creative rebels would now be coming up with the modern equivalent of punk. But today it’s a more effective channel to go into design-led businesses.”

“What has fundamentally changed is that these new internet start-ups are more about content and less about technology per se,” adds Robin Klein, venture partner at Index Ventures, which has made several successful investments in fashion technology companies, including ASOS and Net-A-Porter. Indeed, now that e-commerce basics like customer service and free delivery have become standard parts of almost every site, it is the creative elements and business model innovations that matter most.

Katrantzou, who studied at America’s Rhode Island School of Design, as well as CSM, believes London marries cutting-edge creativity with a bias for innovation and individuality. “When I did my BA in America, digital was considered taboo and there was a brief for every single project,” she recalls. “At CSM, [I was] left to my own devices, but that’s what made me think independently,” she says, adding that CSM fashion MA course director Louise Wilson pushed her along the digital printing path. “She asked me: ‘How is it going to be different from Chanel, from Comme? How is it going to be yours?’”

“Entrepreneurs are the new celebrities, the new rock stars. They have become personalities in their own right and this is definitely inspirational,” says Klein, a fact born out of the scores of new fashion technology start-ups trying their luck. 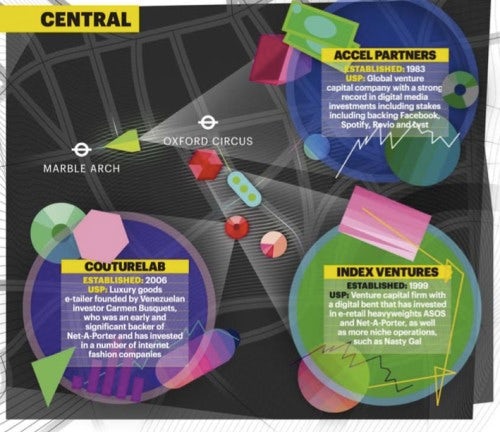 In January 2012, Index participated in an $18m funding round, alongside Advent Venture Partners, in Farfetch, a curated online marketplace for independent fashion boutiques. In 2011, Index announced that it was making a $1.6m seed investment in EDITD, a technology-based trend forecasting start-up. For its part, Accel Partners has invested in Lyst, a social curation site focused on fashion. But the success of these start-ups in securing private investment masks the wider, ongoing challenge that many UK-based start-ups face in raising capital, something Massenet is all too familiar with. Net-A-Porter struggled to secure funding right from the start, and more than once was on the brink of collapse, not because there was no demand for its products, but because there was not enough capital available to fuel the company’s rapid growth.

“Nothing has changed,” warns Massenet. “Venture capitalists are still hoping to find a magic money-making machine that hasn’t been invented yet. There is no magic machine.” The pools of available venture capital are also much smaller in the UK than in the US and investors are more conservative and focused on the bottom line than their peers in New York and Silicon Valley.

Perhaps the most promising source of new funding is coming from those who cashed in during the UK’s Internet 1.0 wave and are now actively investing in the next generation of start-ups. These funds include Atomico Ventures, set up by Niklas Zennström, a co-founder of Skype; Passion Capital from Stefan Glaenzer, the first investor and former chairman of Last.fm; and Cabus Ventures, set up by Carmen Busquets, the founding investor in Net-A-Porter who controlled about one-third of the company’s equity prior to its sale. Busquets recently invested in Lookk, a London start-up designed to create vertically integrated partnerships with emerging fashion designers, from production to electronic retail.

The UK government is also doing its part. Special visas have been established to lure entrepreneurs and investors to set up shop in the UK, the Seed Enterprise Investment Scheme has been established to foster investment in start-ups, and employees with founding shares in start-up companies are taxed for capital gains at only 10 per cent, encouraging top talent to join.

But possibly the best support for London’s growing digital ecosystem comes from the people who work at the start-ups themselves. “The community is very important for us. In fact, we organise a Fashion Founders event which meets twice a year to share ideas,” says Chris Morton, founder of Lyst.

As excitement around social, geo-local and mobile technologies continues to grow, the rapid digital innovation of the last few years is set to continue. Some observers caution that sky-high valuations for technology start-ups, especially those in the US, are indicative of another dot-com bubble waiting to burst. But for now, “London has a unique opportunity to becomethe digital hub for the creative and fashion industries, not just in Europe but possibly globally,” says Frederic Court of Advent Venture Partners.

For once, it’s Milan, Paris and New York playing catch-up.

Imran Amed is founder and editor-in-chief of The Business of Fashion.

A version of this article appears in the September 2012 issue of Wallpaper* magazine available in the UK now, in Europe next week and in the United States/Rest of the World by early September.