The technology soothsayer has released her annual report, offering insights into the evolution of online advertising, the unbundling of media and the gamification of society.

In her final remarks, Meeker called the past five years “epic” for internet companies, noting that 40 percent of the 20 largest companies — in terms of 2017 market capitalisation — are labelled tech companies, and 100 percent of the top five. She also noted that these companies are “often led by founder-driven innovation” and “seeing around corners.” Meeker also addressed big valuations many of the companies receive before going public, suggesting that there are “pockets of internet company overvaluation but also pockets of undervaluation... very few companies will win. Those that do can win big.”

As companies across categories — from Uber to Airbnb to Spotify to Amazon — flourish by keeping tech at their core, Meeker’s insights have great implications for the fashion industry:

Online advertising and commerce will become more measurable and actionable.

Online, brands value engagement from their ads over conversion and brand amplification, but 61 percent still find measuring return-on-investment challenging for social campaigns. Tracking efficacy may become easier, but reaching those consumers may become more difficult. Especially in developing markets, where ad-blocking is growing in popularity. (Ad-blocking penetration on mobile is 28 percent in India and 13 percent in China, versus one percent in the United States.) But there’s no denying that advertising on large platforms garner notable returns. For instance, 26 percent of Facebook users who click on an ad make a purchase, which is far higher than the conversion rate on a traditional banner advertisement. For product-driven companies that pay a premium for user acquisition online — including fashion brands — that sort of reassurance is invaluable. 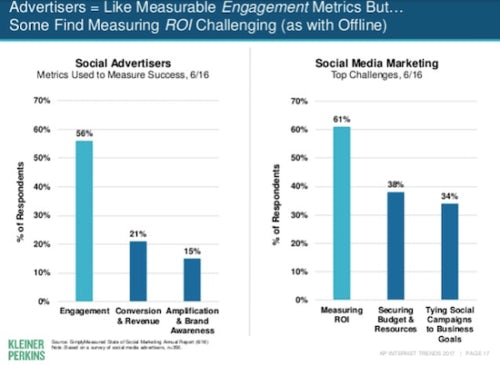 The move toward visual search should also be a boon to fashion brands, as platforms like Snapchat move toward being able to serve up ads against photos consumers take via the app. But there are other ways “emerging retailers and crafty big brands” are making “user-generated content through social work for them.” For instance, more than 40 percent of Sephora’s Instagram content is re-grammed, meaning that the consumer is playing marketer, too.

Meeker said that advertisements are becoming more like visual storefronts, serving as the modern version of a dressed window. She called out several tech-driven fashion startups for their innovative approaches to marketing and product development, including Glossier and All Birds — which both use customer feedback to develop and refine product — as well as MM.LaFleur, the service that sends clients a customised box of work-appropriate fashion items, creating a relationship-driven experience that results in a high customer-retention rate. More traditional fashion companies — which have often failed to cultivate a symbiotic relationship with their customers — must adopt these sorts of tactics in order to compete with nimble newcomers.

Our culture will become increasingly gamified.

There are 2.6 billion interactive gamers across the globe, versus 100 million in 1995. But Meeker says that gaming is still in its early days and will increase as humans become even more reliant on machines. “Perhaps interactive gaming evolution, growth and usage... has been helping prepare society for ongoing rise of human-computer interaction?” 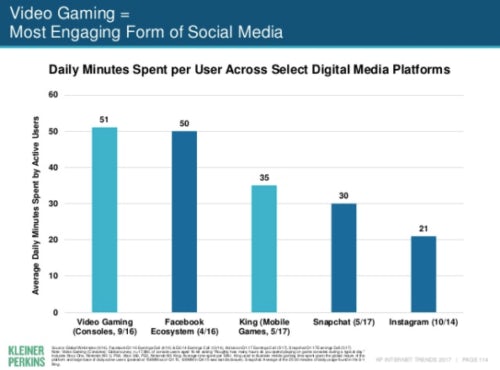 After all, millennials have been “gamified” since birth, and interactive learning has deep roots in gaming. In fact, video gaming is the most engaged form of social media, with console gamers spending an average 51 minutes playing, while users spend an average 30 minutes on Snapchat. There is gamification across a bunch of different categories — advertising on Snapchat is gamified, dating apps are gamified, and food points programs are gamified — but there are more opportunities for fashion brands to apply tenets of gamification to the shopping experience, whether through loyalty programs, digital-to-physical activations and messaging bots.

The “distribution disruption” of media shows that consumers want both infinite choice and expert curation.

The unbundling of media through digital streaming businesses offer insight into the modern consumer’s overall mindset. According to Meeker, “Consumers are increasingly wary of the bundle, opting for the choice, personalisation and pricing of both large and emerging subscription media businesses.” 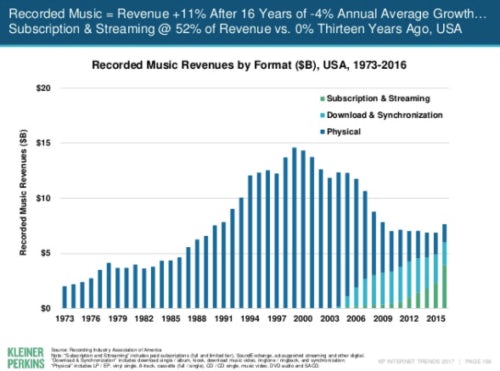 The music-streaming business, for instance, shows fashion that consumers want choice, easy discovery, personalisation and curated recommendations all at once.

Spotify, for example, now makes up 20 percent of global music industry revenue, helping to fuel record music’s first period of growth after 16 consecutive years of declines. Spotify users listen to 41 new artists a week, with 40 percent of those sessions coming from recommendation data. Similarly, in film and television, “cord cutting” has proven to be a real threat to full-package cable subscription services, with younger consumers opting to subscribe to several cheaper services that offer a broader range of choices. Today, Netflix makes up more than 30 percent of home entertainment revenues.

In fashion, there is still room for more organisation, discovery and curation of brands and commerce continues to unbundle. Marketplaces like Farfetch and Spring — but also retailers such as The Line, Net-a-Porter, and Moda Operandi — which each offer a specific point of view and user experience despite often carrying the same product, are tapping into complex consumer demands. Perhaps that way LVMH felt there was room for another luxury e-tailer. In May, the conglomerate announced the imminent launch of 24 Sèvres, a multi-brand e-commerce platform.