With the launch of Sneakerboy, Chris Kyvetos, a member of the recently launched BoF 500, is targeting a new generation of luxury consumers with a highly covetable selection of sneakers and an innovative digital retail model that blends the tactility of a physical store with the efficiencies of the Internet.

This high-tech retail temple, named Sneakerboy, is the brainchild of Chris Kyvetos, 30, former creative director and buyer at Australian men’s department store Harrolds and a long-time sneaker enthusiast, whose carefully laid plans to target a rapidly emerging generation of luxury consumers with an offering focused on trainers were lent credence, late last year, when Balenciaga announced the appointment of its new designer, Alexander Wang.

“Here was an established French house making a move that was previously unimaginable: appointing a 29-year-old Taiwanese kid, with sportswear influences... It said that this generation of luxury consumer needed to be taken seriously.” For Kyvetos, sneakers were the answer. 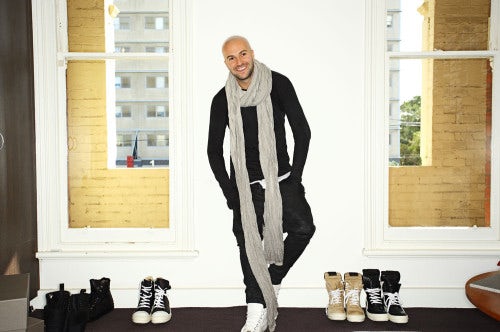 Indeed, buoyed, in part, by the rising tide of a new luxury consumer — who is more likely to be a 35-year-old living in Asia than a 55-year-old based in the West — the humble sneaker has seen its status shoot up from streetwear symbol to luxury icon. “The Asian kids were always shy about whether they could wear Dior Homme by Hedi Slimane, but they would come and pick up a pair of his sneakers and say, I’ll take those,” recalls Kyvetos. “Buying sneakers was the way that the kids were buying into the luxury brands that I was dealing with at the time: Lanvin, Dior, Raf Simons, Rick Owens.”

Kyvetos traces the rise of the luxury sneaker back to a pivotal Dior Homme show in 2004: “It was on July 5th, 2004. Hedi Slimane sent a young Australian design assistant, Jordan Askill, out in a pair of Dior Homme high-tops and a trench coat with the sleeves rolled up. I walked out of there thinking: the rules have been broken.”

For Kyvetos, other key moments in the genealogy of the luxury sneaker include Raf Simons’ Olympics-inspired collection for Spring 2005, Rick Owens’ debut of his now classic “Geobaskets” and Alber Elbaz’s introduction of patent toe cap sneakers for Lanvin, “which became an icon of the industry forever,” he says. “But there have been a some very important events in the last 12 to 18 months,” he continues. “Hedi Slimane moving the Saint Laurent Paris offices to LA, the rise of Riccardo Tisci at Givenchy and — again — Balenciaga’s appointment of Alexander Wang. I felt these were really significant moments in the history of luxury brands and Sneakerboy was about the chance to really represent this.”

To turn his vision into a reality, Kyvetos turned to Harrolds founder Theo Poulakis and financier Guy Obeid. “I’ve been really lucky because I knew the guys who could back me. I don’t really see them as investors; I see them as my partners. We work together really closely. Guy is running the business side of Sneakerboy as interim CEO and Theo wouldn’t let us give him a title, but I guess you would call him a non- executive director.”

But tapping a new generation of luxury consumers required a next generation retail model. “Young people know what they want; they are used to controlling their own environment, they shop online. I think they should be able to do that in the store as well. Our customers can come in, see an amazing range of products that are relevant to their tastes. They can touch it, feel it, try it on, then scan it themselves, check if their size is available, then buy it from an iPad or phone and it will be delivered within three days,” explains Kyvetos.

Like Apple stores, Sneakerboy has no fixed points of sale. Instead, consumers check out via a Sneakerboy app (on their own phones or in-store iPads) that remembers their shoe size, payment preferences and purchase history — and provides tailored information about new products.

What’s more, the store’s product release cycle is more in tune with the rhythm of the Internet than traditional seasonal drops, peppering a constantly updated, seasonless feed of new products with “quick strike” releases of special limited editions.

But perhaps most importantly, Sneakerboy houses no purchasable inventory on site, only a range of samples in various sizes for fitting purposes. All transactions are processed via a single web platform and product ships from a logistics hub in Hong Kong, which means quick deliveries to China.

It also means that Sneakerboy’s sales productivity per square foot — the critical metric for retail performance — is expected to be much higher than traditional stores, which devote around 50 percent of their square footage to storing inventory, an expensive proposition in prime retail precincts.

In contrast, Sneakerboy is able to deliver a product assortment that would normally occupy far more space, at a fraction of the cost. The company’s Melbourne store is only 80 square metres, with a full 77 square metres devoted to product display, making it a highly efficient use of real estate.

“As a multi-brand retailer we don’t have the margins of a vertically integrated business, so we think the efficiencies, both in the stores and with a centralised stock holding will hopefully help us to fund growth,” says Obeid.

With a second location set to open in Sydney in October and ambitious plans for store expansion across the Pacific Rim — in South Korea, Malaysia and Hong Kong — Kyvetos’ vision for Sneakerboy’s fresh-out-of-the-box retail model, which unites the tactility of a physical store with the efficiency of the Internet, is firmly fixed on the future.