Celebrated art director Patrick Li sat down with BoF to talk about his personal journey from a UC Berkeley student obsessed with music and architecture to the top of New York’s fashion media world.

PARIS, France — Patrick Li is light years away from the stereotype of the imperious art director dictating his vision for a fashion campaign or a perfume bottle. With an affable, thoughtful demeanour, Li could easily pass for a cool, young professor were it not for the subtle indicators of his advanced aesthetic sense, among them a distinctive pair of designer glasses from Facial Index in Tokyo, a sharply-cut blazer and the relaxed confidence that comes with being a creative professional at the top of his game.

Last November, the 45-year-old Li took the reins as creative director of T, the New York Times’ influential style magazine, where he followed editor-in-chief Deborah Needleman, with whom he worked at WSJ magazine. But his current position, at what is arguably the world's most famous newspaper, is just the latest stage in a two-decade-long career spent creating the visual vocabularies of leading brands from the worlds of art, beauty and fashion. 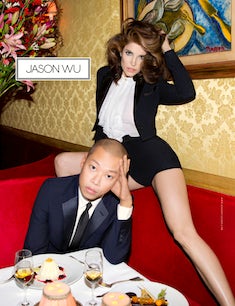 Apart from being the go-to graphic guru for a generation of emerging American designers, including Alexander Wang, Phillip Lim, Rodarte and Jason Wu, Li has helped define the visual identities of clients ranging from blue-chip art institutions like the Guggenheim Museum and the Dia Art Foundation to Vogue China, Estée Lauder and Nordstrom.

“Patrick has really, really good taste — impeccable taste,” Jason Wu told BoF. But ironically, Li’s mission as an art director is, in his own words, to “fight against the tyranny of good taste.” Which just goes to show the distance between ‘good taste’ and ‘great taste.’

Long before fashion attracted his attention, Li, who was born in Northern California, had his sights set on being a doctor. “I wanted to be a radiologist and volunteered in the radiology department at Stanford Hospital. You know, you’re looking at these amazing x-rays and I thought, ‘Oh, this is sort of visual.’ And you’re helping people! I was a really good biology student.”

But Li’s path changed once he got to university. At the famously liberal UC Berkeley, Li not only discovered his wild streak — “I hosted a lot of crazy parties at Berkeley, it was very salacious” — but also his passion for architecture.

“It clicked for me, there, that one could create space, and how a certain space can affect one’s perception. It was science but it was also — not really science, but mathematics. It was this sort of engineering mixed with the aspect of designing a space,” he recalled. “Similar to how, when you are young, you’re defined by what kind of music you like, I learned that in architecture there were different aesthetic camps, depending on what architects you were really into. For me it was Tadao Ando. I was just like, oh my god, this is revolutionary. This idea of emptiness in space.”

At Berkeley, Li also worked at a newsagent, where his introduction to the world of magazines began. “I was like ‘Oh my gosh, hey, look there’s Vogue magazine and they have one in Italian too! There’s a French one!’” he remembered. “But my favourite magazine was [graphic design magazine] Emigre.” Since his teenage days, Li had been obsessed with music, in particular records released by the British label 4AD, known for its visually distinctive packaging. “To me it was the perfect meeting point of a visual identity and music.” When Li found out that his favourite magazine was putting out an issue devoted to his favourite music label, he took the step that probably launched his career.

“I had a Comme des Garçons postcard that I had gotten from the store; I had gone there and thought ‘Oh, this store is so incredible.’ So I made this stationery and I wrote [Emigre] this letter. I photographed the stationary onto some vellum and I wrote this letter saying, ‘I love your magazine, I love 4AD, I need to work for you.’”

Eventually, Emigre responded. “They were like, 'Bring your portfolio.' And I was like, 'Portfolio? What portfolio?' I had all these cassettes tapes and I had some architecture drawings and I had like, some music stuff. He said, ‘Bring whatever you have.’”

Li got the job. “I did everything from distribution of the magazine to editing typefaces and cleaning up pixels.”

In 1990, Li moved to New York, another early obsession. “I would read about New York’s subculture in Paper magazine.” Through a combination of moxie and luck, the day after he arrived in Manhattan, he started working at Interview, the magazine founded by Andy Warhol in 1969. “I moved on Monday, went to Interview on Tuesday, and started working there on Wednesday. Fabien [Baron] was there and he had an Emigre poster up in their art department. It was really weird.”

The legendary publication became his second training ground. “I learned everything about the world of design through Emigre, and then going to Interview, I learned about where fashion intersected with graphic design.” It was also during this period, as a hungry and talented newcomer to the big city, that Li made the friendships that would later open doors. “[Interview] was a beautiful place to be and I met so many people. It was like the crossroads, this hub of creative energy.”

Still, after two years, Li decided to move to Taiwan to pursue his original interest, architecture, again. “I got fed up [with Interview] at a certain point,” he said, adding: “I am really not into this strict definition of what it meant to be creative. Even today, I don’t really think of myself strictly as working in the fashion world. I feel like there’s beauty, there’s the art world, there’s all these different intersections. And as different as they are, involving different people and different cultures, in the end architecture, art and fashion are about the same thing: this respect for an aesthetic, this respect for someone’s vision.”

But even as he was abroad designing signage and stairs for public buildings (wayfinding systems that continue to influence his work), Li kept up his ties to the magazine world, working as a correspondent for Tibor Kalman’s magazine Colors.

After a short five months, Li returned to New York to take up a position at The Observer, at the time under the stewardship of Graydon Carter, then, in 1993,  went to work for Fabien Baron, the French art director who has helped define the visual identities of brands like Calvin Klein. It was his eight years at Baron & Baron that cemented his fashion credentials (and connections) and provided the platform for Li to launch his own advertising and design agency, Work in Progress, now called Li Inc. In addition to designing Self Service magazine with former partner Ezra Petronio, the agency soon earned A-list clients like Comme des Garçons Parfums, Bottega Veneta and Chanel.

But, as a leading art director, what exactly does Li do on a daily basis?

“It’s a lot about image management and brand management,” he said. “An art director creates a visual language around whatever topics and subjects that they’re art directing. So if it were a perfume or a fragrance, the art director can help visualise what the world is around that fragrance. You make decisions that help reinforce what that brand’s values are, and you make aesthetic choices that all point in the direction of those values. For a magazine, you help bring the visual information to the words. The photography, the typeface choice, the design, the size of the font…”

A self-confesssed “dork,” Li is obsessive about design details. “I’m such a nerd, I’ll go to Barneys and look at hangtags on an afternoon. Like, ‘Oh look at what that person’s doing’ and ‘Oh, they’re using this material. Look at the width of their ribbon’ or whatever. I find that weirdly fascinating.”

Working with so many clients from the same space, one of Li’s tasks is to distill and communicate the essence of each brand, something he says he learned in his days working for Baron & Baron. “I learned at Fabien, you know, working for Calvin Klein, Jil Sander, Armani — they’re all very similar targets but you sort of isolate specific values; like ‘Okay, this one is more elegant, this one is more street.’ And then you take that point of difference and you exaggerate it.”

But success can come from spontaneous inspiration as much as any kind of structured process, he said, recalling how he and his team came up with the distinctive, playful logo for Jason Wu’s Miss Wu line, a hand-drawn owl. “I have a great studio. And me and one of the art directors in the office, Seth Zucker, we’d be sitting there in the office thinking, ‘Oh god, Miss Wu, Wu, Wu.’ And we’re like, hey… should we try something like that? Should we make it cute? We had gotten some direction from Jason saying, it’s a younger side of himself and it’s more girly. So we just threw different ideas out there and really liked the idea of Miss Wu as a character. We presented a number of sketches and the owl won.”

Li’s current position at T began, improbably, at a classic New York diner. “I first met Deborah [Needleman] through the recommendation of a friend. She called and I’m like, “Uhh, I’m on my way to China right now, can’t really talk.’ She said, ‘You have to meet me right now.’ And I said, ‘Well I’m on the way to the airport in an hour, but I can drive up on the way, have the driver wait for me, and we can chat. So I met her at Jo Jr. at 16th Street and 3rd Avenue. She was dropping off her kids at school. We met and we had like a speed date. And it felt very natural and very kind of like, ‘Oh my gosh, this woman is unlike any woman I’ve met in fashion.’"

The two soon started working together and, in less than a year, took WSJ from just another luxury supplement to an important lifestyle title in its own right. 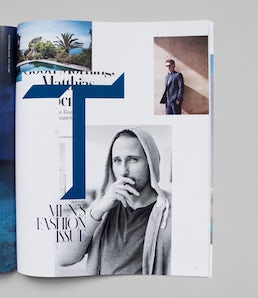 When Needleman left WSJ for T, she asked Li to join her. “There was no question. I owe so much to Deborah and I really appreciate her outlook in this industry. Moreover, T is not strictly about fashion, so I felt like that was also a place where I can continue to learn about who are the best cooks in the world or who does the best garden design.”

Their first issue of T, which came out last month, announced a new direction for the magazine with a radical redesign of its famous one-letter logo. “As a designer, I really liked the old gothic ‘T,’" recalled Li. "But after speaking with Deborah, I saw that there were certain factors, important factors, business factors, that necessitated the change.” The striking, bevelled new look aims to be tactile, as well as visual: “I always appreciated the physicality of paper. This sort of embossed thing that’s still so important to me. Otherwise we’re just all digital.”

So what advice does Li have for aspiring art directors?

“I would say look at who the leaders are on the path that you want to follow and ask yourself what makes their work or character so successful,” he said. “Try to learn, not literally from what their steps were, but from the more intangible qualities that makes that person, that client, or that job, so good. You have to develop an instinct for that and, then, I would say, follow that instinct!”