Are Luxury Brands Pushing Too Many Collaborations?

In April, luxury brands went crazy for collaborations while some of Italy’s fashion titans more openly embraced the idea of an Italian luxury champion to rival LVMH and Kering, writes Pierre Mallevays in this month’s Market Pulse.

Are Luxury Brands Pushing Too Many Collaborations?

In April, luxury brands went crazy for collaborations while some of Italy’s fashion titans more openly embraced the idea of an Italian luxury champion to rival LVMH and Kering, writes Pierre Mallevays in this month’s Market Pulse.

From Hermès’ Apple AirTags to ‘Gucciaga,’ luxury brand collaborations were everywhere last month. So, when does the formula work best?

Brand collaborations pairing hot designers with volume retailers to produce eye-catching, limited-edition collections at affordable prices have long served to generate media impressions and drive traffic to stores, creating powerful touchpoints with fashion customers. The model was pioneered by US supermarket chain Target when it teamed up with Isaac Mizrahi in 1999 but perfected by Swedish fast-fashion giant H&M, which has launched successful collaborations with Karl Lagerfeld, Lanvin, Stella McCartney, Cavalli, Versace and others.

Today, these retailer-designer collaborations continue, although consumers are showing signs of fatigue with the formula and retailers may be running out of compelling names with whom to partner. Alongside the approach, however, a new genre of brand-on-brand collaborations has taken the market by storm, aimed at generating novelty and cross-pollinating customers.

Hermès generated terrific levels of attention this month when it unveiled a selection of key rings, bag charms and luggage tags with specially branded versions of Apple’s object-tracking AirTags. The French luxury brand also offers an iPhone case that uses Apple’s MagSafe technology and special versions of Apple’s Watch. Here, both brands win: Apple is strengthening its credentials as a luxury brand, while Hermès is engaging its customers where they are increasingly spending money: in the technology category more broadly and with Apple specifically.

Luxury labels have also used brand collaborations to go after streetwear-obsessed Gen-Zers. Dior’s Nike Air Jordan 1 High OG sneakers were one of the hottest collaborations of 2020. Five million people registered on a dedicated microsite created by Dior for the launch of the shoes, which were sold for around $2,000. (You could have made a ten-fold return on your investment on the resale market if you were one of the lucky few to have secured a pair of Air Dior at launch). The product was authentically streetwear whilst being uncompromisingly luxurious, generating a halo effect on Dior’s wider offering and recruiting younger customers to the brand.

But the rationale is less clear when luxury brands come together to collaborate with each other. What to think of Rolls Royce’s recent collaboration with Hermès to produce a custom Phantom for Japanese billionaire Yusaku Maezawa? To be sure, the client is always right, and rightly so. But it’s hard to imagine the tie-up having much strategic value. Then, there’s Bulgari collaboration with Dom Perignon on bespoke champagne bottles. Was this truly worthy of headlines?

Last but not least, last month Gucci designer Alessandro Michele “hacked” Kering stablemate Balenciaga, resulting in “mutual contamination” of logos and design codes from both brands. “Gucciaga,” as some dubbed it, certainly drove eyeballs, but beyond short-term media impressions, it was hard to see the logic.

Nonetheless, the luxury sector is clearly on a roll, with Hermès announcing spectacular first-quarter results and sales exceeding pre-pandemic levels; Kering beating analyst estimates for the quarter thanks to a strong rebound by Gucci; and LVMH’s market cap surpassing €300 billion as it, too, beat expectations for the quarter with sales shooting ahead of 2019 levels.

The Savigny Luxury Index (“SLI”) gained over nine percent in March on the back of very strong quarterly results, outperforming the MSCI by almost eight percentage points. 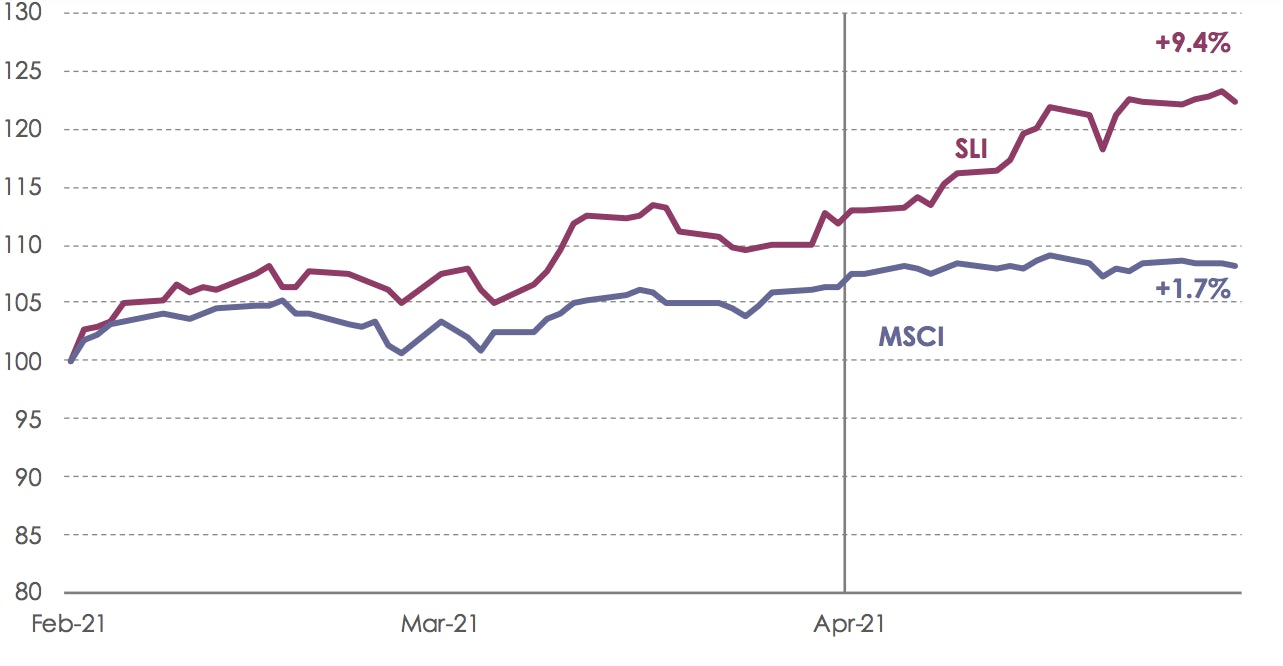 Last month, Dolce & Gabbana put to rest rumours of a tie-up with Kering but did not rule out being part of a “broader Italian project” putting together several Italian brands under one umbrella. The sentiment was echoed by Giorgio Armani who, in an interview with Vogue, said that he was open to an alliance with another Italian group and in the same breath dashed any hopes of a takeover by one of the French giants. Will Italy finally manage to create a luxury champion to rival LVMH and Kering? Moncler has pitched its tent as a consolidator with the acquisition of Stone Island, while OTB president Renzo Rosso, who recently acquired Jil Sander, has been advocating for stronger alliances between Italian brands. 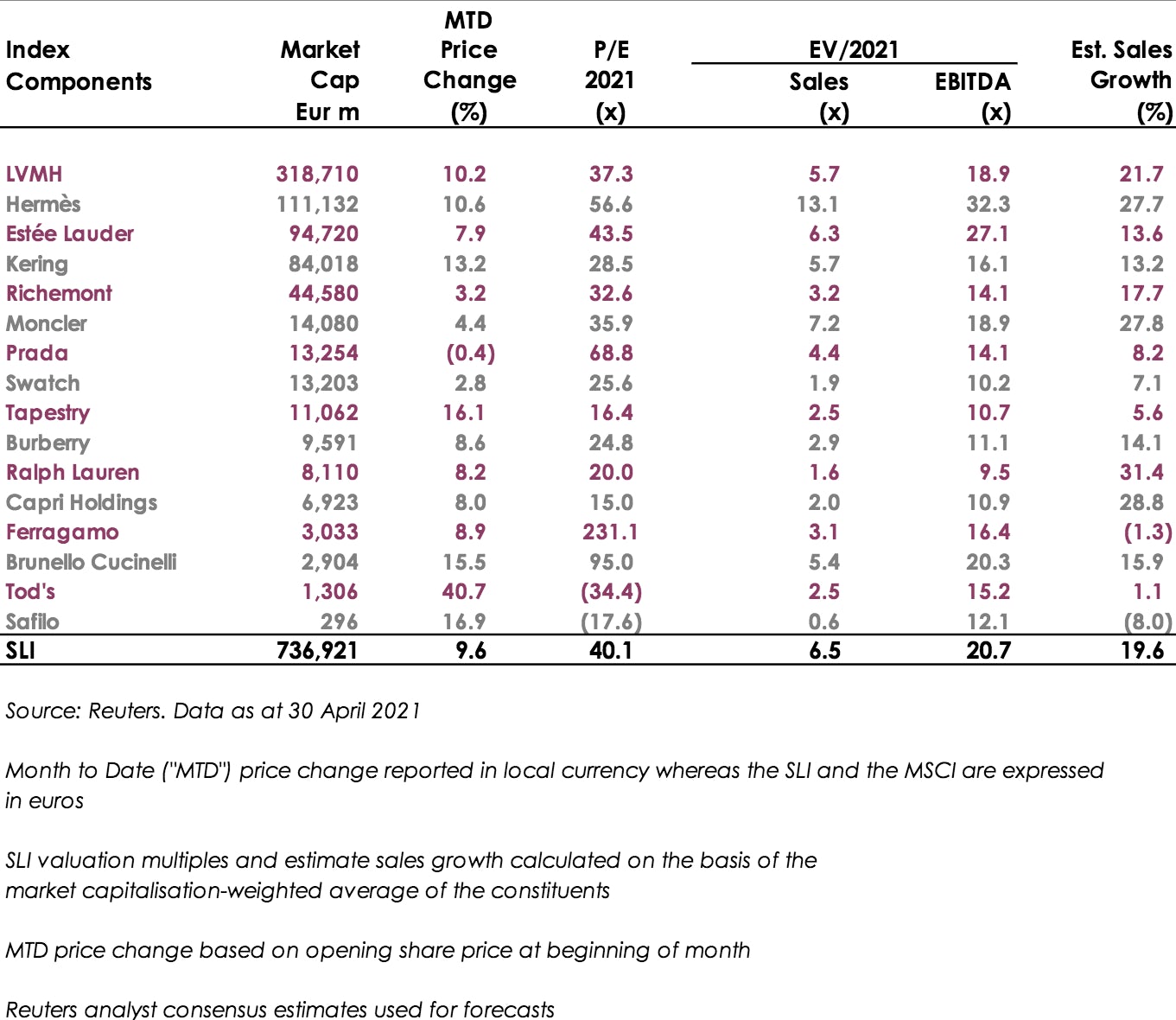