After a career surfing the zeitgeist, the rising star of Paris Fashion Week comes home to humanity for her latest collection, writes Tim Blanks. 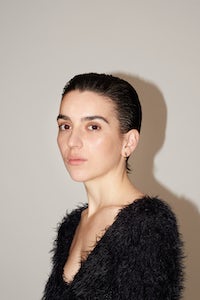 After a career surfing the zeitgeist, the rising star of Paris Fashion Week comes home to humanity for her latest collection, writes Tim Blanks.

Marine Serre was born and raised in a village so small you’ll never find it on a map. It’s somewhere in Corrèze, a region in the southwest of France which is famous for its wild, unspoiled beauty. Her family were always farmers. The only book Serre remembers from her childhood detailed the local terrain and its flora and fauna. To this day, she looks like a woodland sprite, bright, trim, pointy. When she left for boarding school, and a whole new world, at the age of 13, she fell under the spell of William Blake, 18th century poet of the Apocalypse. “The Marriage of Heaven and Hell was the first book that really marked me,” she murmurs.

Less a mark, more a brand. Marine Serre has evoked the Apocalypse in her work more than any artist I know — certainly more than any other fashion designer — and yet here we are, gazing at each other on the screens that have become a necessary mode of communication in a world overwhelmed by illness, isolation, uncertainty and death, while she is telling me about “Core,” her new collection and the concept that launches it, and I could almost cry at the humanity of it all.

“Before we have been a bit apocalyptic, alarming … ” she acknowledges disarmingly. “But the apocalyptic part was a protective carapace.” Now, confronted by catastrophe unfolding IRL, she has embraced something more fundamental: community, family, friends, and all the hope and optimism that are wrapped up in those ideas. “I’m actually quite optimistic,” she insists. “I find a way to continue.”

Like many of her peers, Serre has turned to films to express herself during the pandemic. “Amor Fati,” her last, was a vision of a post-human dystopia. You could run it next to old Cronenberg in an ’80s film festival and the audience would have stood and cheered. At the time she worried about how dark it was. “We were already living something difficult, but I thought somehow we needed it. And it still had a lot of heart and rebellion,” Serre says, despite the film’s clinical chill. “Our attitude was, ‘We’ve had Covid for five months, we’ll be alright.’” She saw it as a kind of full stop. Now it’s been a whole year and what makes the new project — collection, film and accompanying book, all labelled Core — so surprising and rewarding is that indefatigable human optimism Serre talked about.

The film is a complicated thing, part documentary, part multi-levelled video game and utterly of the moment in its immersiveness. If you “play” it from start to finish, it could take you 90 minutes. Do it. Serre has built a business on hyper-active sustainability, upcycling, regenerating clothing. That has been the inner core of her brand from the time she launched four years ago.

“We haven’t been really successful in showing that,” she says. “There weren’t enough people looking and understanding. So we wanted to bring people to a more intimate place.”

The documentary element encourages that with a series of short films focused on the brand’s friends and families, the people it was fortuitously easiest to work with given the restrictions of lockdown. Call me a voyeur, but it’s irritatingly difficult to resist the pull of watching interesting (I’m hoping) people do completely ordinary things. Obviously, they’re all wearing Marine Serre as they go about their daily lives, and each film highlights picture-in-picture a specific something in their outfit that embodies the brand’s sustainable ethos. Maybe someone is wearing an outfit collaged from silk scarves or recycled denim or household linens. Click on the picture-in-picture and enter a world where the processes that regenerate those pieces are illuminated with consummate, convincing clarity. It’s an education in the so-called “archeology of textiles.” It’s also a fascinating rabbit hole. (I’m particularly looking forward to revisiting the bedspreads and T-shirts.)

As well as the sustainable core of her business, Serre says Core references the core of the planet, the core of a computer, the core strength of a human body. It has the inescapable lucidity of a manifesto. “Could Beyoncé's favourite designer save fashion?” The Guardian asked last September, after Serre dressed the activist star in “Black is King.” Her crescent moon emblem has been spotted on everyone from A$AP Rocky to Adele, “and worn,” she marvels, “in the same colour, so it’s not like they were each looking for something unique.”

She was even more taken by the fact that a friend was served in a supermarket in China by a girl in Serre’s moon top. If the notion of the designer as a saviour of any kind doesn’t sit with her, she acknowledges that her signature crescent moon does embody something mystical: its significance to Islam, obviously, but also “the divine feminine.” And if Serre shies away from salvific, she loves shamanic. “I really like the transmission part of what we do,” she says. “In a very short time, I’ve built a team of 70 people, and there’s nothing better than having 70 people who share an amazing point of view on what they want the future to be, and to wake up every morning for this reason.”

“Certainly in fashion, there are a lot of mystical things,” Serre continues. “I mean, when you’re upcycling clothes, you have a whole past story about time and ancestors, which I like. Sometimes it’s disruptive, sometimes beautiful. I’m not really keen on the cliché of the fashion ‘dream’ but I like beauty. For me, it’s a bit like Core, a connection point, an equilibrium. I ask people to connect with a piece, where it’s coming from. You cannot drape anything you want from carpet, otherwise you destroy it. So it’s always a kind of balance, between the story of garments that have been used before and the image of right now.”

I’m not really keen on the cliché of the fashion ‘dream’ but I like beauty.

One word that continually cycles round to Serre is “zeitgeist.” Right behind it is the complementary “facemask.” Face coverings have been a markedly distinctive part of her looks from the beginning. You could say that was her response to an urban environment peopled with bike couriers, but she always had a survivalist bent: blank slate girl from the backwoods, plunged into the chaos of cities, first, Marseille, then Brussels, then Paris. It took Serre a while to settle on fashion as a career. She considered furniture. And when she won the LVMH Prize in 2017, for a collection she titled “Radical Call for Love,” the first question she asked herself was “Does it make any sense to have one more fashion brand in the system?” Fortunately, she saw an opportunity.

But the ambiguity lingers when you ask her to describe herself. “Somehow if I feel something, I feel a survivor, a Mad Max thing,” she answers. “I think a lot of people feel like that.”

When you’re presented with someone who is translating abstract concepts like sustainability or upcycling into actual, desirable items of clothing that you may want to put on your body, my initial temptation would be to describe them as mediums. They’re a conduit for our personal enjoyment and enlightenment. Serre’s not having any of that. “I think I’m an extreme sponge. Maybe it’s because of my childhood, but when something heavy happens, I really experience it. I’m a little more expressive than my friends. And I really love to learn. Maybe that’s also because I started from nothing. Everything and everyone you learn from every minute you live in your life. It makes you more connected, in an energy sense.”

I wonder if Serre ever gets disheartened when she is confronted by the enormity of the waste the fashion industry creates. The denim regeneration film in Core is uplifting in one way — at least someone is doing something about all those old pants — but in another, it’s numbing when you see the sheer size of the bales of worn-out jeans. Can I take comfort from the fact that the shit that isn’t upcycled gets turned into cotton fibre for insulation? “It’s really tough,” Serre agrees. “When we went to a huge warehouse where we saw tonnes and tonnes of garments, I wanted to cry. The size of the human body compared to this amount of waste is destabilising. But somehow I feel if we’re here, it’s to change things. I’m somehow quite hyperactive. This is also a way of surviving, of keeping an interest in life.”

What frightens the girl from the deep, dark forest? She thinks for a long while. “What scares me is the human alone, isolated. If things are blocked, if connections aren’t happening … I’m trying to make as much room as possible, as much connection as possible, so we will never lose this flow.”

I feel the connection she really wants us to make is with nature. It’s a wild child who says, “Every day you dress up, but I didn’t need clothes in the forest.”