The Year Ahead: Less Is More for Both Consumers and Brands

Consumers are rethinking how much they buy, while brands are realising that simply stocking more products does not drive better financial results. Winning companies must reduce complexity and inventory levels by taking a more focused and responsive approach to their assortment.

The Year Ahead: Less Is More for Both Consumers and Brands

Consumers are rethinking how much they buy, while brands are realising that simply stocking more products does not drive better financial results. Winning companies must reduce complexity and inventory levels by taking a more focused and responsive approach to their assortment.

Even before Covid-19, the fashion industry had been edging towards a dangerous threshold. Excessive inventories and widespread markdowns proliferated to the extent that just 60 percent of garments were sold at full price, creating billions of dollars of lost revenues and margin.

During the pandemic, the situation worsened. Inventory levels increased significantly despite brands’ and retailers’ scrambles to implement damage control. Inventory turnover fell by 33 percent in the first three months of 2020, and orders were down nearly a third year-on-year by the end of April.

Few fashion players were immune as markdowns proliferated across all value segments and product categories. Gap, LVMH and Brunello Cucinelli are among those to have announced substantial inventory impairments as a result of the pandemic. While some businesses found creative ways to clear unwanted stock — such as dedicated websites like Ganni’s, which sell past seasons’ collections at a discount, or through pop-up outlets like Harrods — other brands, from PVH and Michael Kors to Gap and Versace, are holding onto excess inventories in the hope of an uptick next year.

“In uncharted times such as these you need to be brave and decisive. Harrods Outlet has provided us with an innovative solution to a completely unprecedented, and unforeseen, issue,” said Michael Ward, Managing Director of Harrods.

Few fashion players were immune as markdowns proliferated across all value segments and product categories.

The overstock issue will only get worse in the future if companies fail to adapt to the consumer’s new mindset. Consumer attitudes are changing in the wake of the pandemic, as many embrace a “less is more” approach that coincides with industry changes in the fashion cycle. Some 65 percent of consumers in a McKinsey survey conducted during the Covid-19 crisis said they plan to purchase more long-lasting, high-quality items, and overall, consumers considered “newness” one of the least important factors in making purchases. The pandemic has not only accelerated a pre-existing critique of consumerism, but also the increased importance of sustainability in purchasing decisions, and the rise of circular business models (especially resale).

As Farfetch Founder and Chief Executive José Neves said in July 2020 on The Business of Fashion Podcast, “the industry has an oversupply problem, which is an environmental problem as well.”

Due to these and other factors, brands will need to focus on three key priorities in the year ahead: accelerate their shift toward a demand-led model, reduce assortment complexity and address the recalibration of the price-volume equation.

In a bid to better match consumer preferences, brands will increasingly leverage technology and analytics to gauge consumer sentiment prior to production. Several brands have already taken steps toward basing product development on consumer insights and analytics and, at times, coupling these with made-to-order models.

“The higher the percentage of made-to-order business, the less overproduction you’re going to get involved with. That’s the first thing that luxury needs to concentrate on; smaller runs, ideally a run of one,” said Louis Vuitton Chief Executive Michael Burke. “It’s maybe pie in the sky to actually hit 100 percent with that, but that should be a goal.”

Brands will need to focus on three key priorities in the year ahead: accelerating their shift toward a demand-led model, reducing assortment complexity and addressing the recalibration of the price-volume equation.

Meanwhile, Reebok has tested its designs with consumer votes, making production contingent on votes passing a minimum threshold of demand. At the same time, made-to-order models adopted by smaller brands like French label MaisonCléo or US brand Stòffa are increasingly being trialled by larger brands. Several others, including Nike and Telfar, have leveraged pre-orders and just-in-time production models, in which consumers purchase items before they are produced and receive them several weeks or even months later.

Analytics and artificial intelligence will also gain traction in the product development process as data becomes more available to brands and designers become more skilled at using data. Footwear and apparel brand Wolverine plans to optimise assortments with digital consumer testing based on First Insight’s predictive analytics, where voice of the customer (VoC) feedback is combined with artificial intelligence.

With 60 percent of fashion executives in our BoF-McKinsey State of Fashion 2021 Survey planning to implement improved analytics for consumer insights and 43 percent planning to reduce product development lead times to avoid overstock, (Exhibit 8) it is clear that there is a movement underway to transform the supply chain. Wholesale pre-orders will increasingly be kept low while open-to-buys will increase, creating an opportunity to bring in the latest products consumers want or to replenish bestsellers.

The reduction of SKUs is mentioned by more executives (61 percent) in the survey, as complex assortments are inherently problematic. Such assortments create long tails of unproductive SKUs, detract from core products and cause bottlenecks in the system and in-store. They also muddy the waters in respect of strategy, communication and formats. Nonetheless, brands have continued to expand their assortments in recent years, often due to the “fear of missing out” on new trends, or in order to launch a new item during a key sales period. 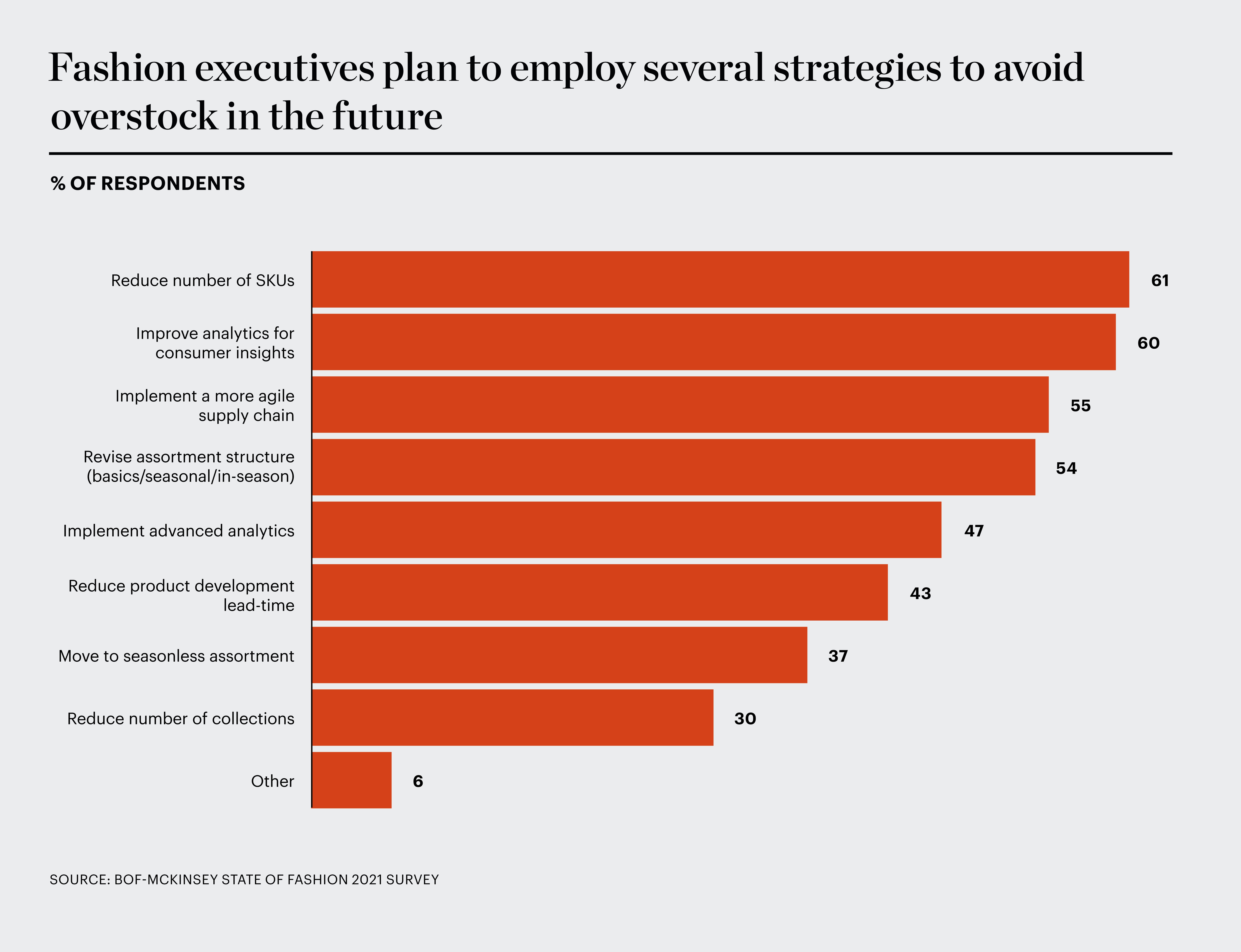 In 2021, we will see brands applying smarter approaches to assortment, aiming to reduce complexity and realign collection drops with clear consumer opportunities. Some brands that have already begun this process include Victoria Beckham, which has said it will cut SKUs by 30 to 40 percent, Nike, which has streamlined product lines to improve SKU productivity by 15 percent, and Coach, which plans to cut 50 percent of its holiday season collection. In July, the SMCP group announced it would cut its inventory purchases by 30 percent for the FW20 season.

Another way brands are streamlining their assortment is by breaking the shackles of the traditional fashion calendar. Indeed, the current number of collections across the seasonal calendar is increasingly seen as an impediment to a demand- focused approach. Echoing the sentiment of 30 percent of executives responding to our survey, Off-White, Tory Burch and Mugler are among the brands that have announced departures from the seasonal schedule, enabling them to regain control of in-store delivery.

As luxury players focus their energies on fewer yearly collections, some are shifting away from cruise and resort collections. As the trend continues into next year, brands heavily reliant on these inter-seasonal collections will face the challenge of having to adapt to a reduced fashion calendar. Gucci announced it would be scaling back the rhythm of its collections from five to just two per year, reflecting a growing movement toward seasonless fashion among retailers; this is underlined by results from our BoF-McKinsey State of Fashion 2021 Survey, which reveals that two fifths of executives plan to make the move. This adds to a growing chorus of brands and designers calling for the fashion calendar to be rewired, such as the Dries Van Noten-led Forum Letter to the fashion industry and the #RewiringFashion initiative facilitated by BoF.

However, to solve the underlying overstock problem brands need to capture more value, and this means striking a new balance between pricing and volume. There are two levers at their disposal: the reduction of discounts and the optimisation of prices (price increases for brands that have not yet reached the limit of fair value).

After the discount drive of the early phase of Covid-19, the next phase saw a revision of price points and the implementation of “no sale” strategies to safeguard margins. Some direct-to-consumer brands, including US-based Dôen and French label Sézane, have built their success on the absence of end-of-season markdowns, relying only on occasional “archive” and sample sales. Some luxury brands, meanwhile, have room to leverage their desirability to lift prices. Although these strategies overlap with brands’ broader price harmonisation plans, the willingness to capture more value from key products appears to be the main rationale of recent price increases.

“Our pricing policy of staying at the European level remains unchanged. Russian customers should not be penalised for shopping in Moscow [rather than] in Paris or Milan,” said Alexander Pavlov, chief executive of Tsum department stores in Russia, which are managed by Mercury Group. “We believe that practice of markdowns and price reductions in the full-price stores has [a] negative effect on long-term business; we constantly discuss it with our partners.”

Value and mid-market brands have been more reluctant to ditch markdowns. However, they are adopting more sophisticated, tailored pricing strategies with levels and duration of discounts informed by market and consumer data harvested by analytics and artificial intelligence. Levi’s has reported significant benefits from its optimised, data-driven approach to markdowns, with some promotion events generating four times the profit of similar initiatives from the previous year. Meanwhile, some smaller labels have taken more control of pricing with concession models on online marketplaces.

The events of 2020 have highlighted that more is not always better. Indeed, they have shown that brands that reduce complexity and rely less on discounting as a way to prop up sales often outperform those that do not. When combined with a demand-focused approach and intelligent assortment management, the overall impact is a more streamlined business model that is better suited to the global market.

In 2021, we expect brands to sharpen their assortment using high-quality analytics, and to test more products with consumers ahead of production. Brands will focus on accelerating speed to market and on aligning launches and product drops with their customers’ needs rather than the traditional fashion calendar. This will lead to a permanent change in mindset among consumers.

Moreover, brands will need to become nimbler to pursue price optimisation and manage markdowns in a smarter way as they adopt a more measured and sensible approach to production in the wake of the industry’s new mantra: “less is more.”