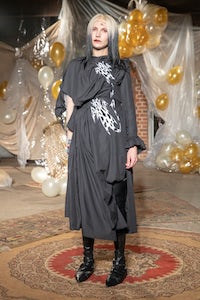 LONDON, United Kingdom — I was wondering if it would take London long to acknowledge the tang of revolution in the air. Then it happened on the very first day of the city’s three-day men’s schedule. Charles Jeffrey calls himself Loverboy, but this kitty had claws with a collection that was a curiously timely, multi-layered call to the barricades. There were echoes of the sans-culottes, the French revolutionaries who chopped their way through the French aristocracy in the late 18th century. There was a sexy swing through Berlin in the 1920s, when the Weimar government made its brave, doomed attempt to fend off the failed masculinity that fed Nazism. And, more obtusely, there were a couple of kids in a bathtub deliberately evoking “The Dreamers”, Bernardo Bertolucci’s movie about a teen ménage à trois during the student upheaval in Paris in 1968.

You could huff and puff your way through all of that and find yourself back at Jeffrey’s celebration of creativity and community. That is the special essence of what he does. Simon Costin staged the show and, with his track record in some of British fashion’s finest hours (i.e. everything to do with Alexander McQueen’s London years,) he created a twisted, evocative world. Theo Adams populated that world with his company of dancers/actors. Leo Charlton made hats, Matthew Needham was in charge of upcycling, John Vial and Lucy Bridge were the hair and makeup wizards… I could go on but the point I’m making is that Jeffrey’s work is a collaboration, and it’s driven by a spirit of playfulness. “Adult in a childish way,” he said after the show, which scarcely downgraded how accomplished it was in its execution.

Jeffrey’s fashion education included time spent interning at Dior, and the elegance and chic of those days filtered into the peculiar artifice of this collection. You could imagine the dropped waists, the knife-pleated skirts (in tartan and teal leather) and tailored plaids dressing a decadent house party in the Highlands. The stripiness, the top-stitching loaned a surreal sporty edge. (My non-gender specificity is entirely intentional.) But the plangent twang of Jeffrey’s collection was his acknowledgment that the NeverNever Land of this particular fashion fever could only be home to Lost Boys and Wendys doomed to disappointment. In that spirit of disillusionment is resistance bred.

“An opposition to a rumbling sense of global unfairness,” claimed Jeffrey’s show notes. Oof! At show’s end, the models danced blissfully to the Supremes. Tomorrow, they rise.