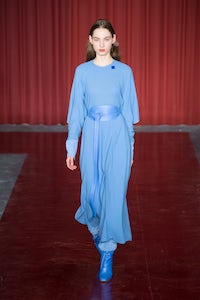 LONDON, United Kingdom —  Roksanda Ilincic’s show began with a touching tribute to her late friend and peer, Richard Nicoll. A single look, in his eponymous blue, came out to a beautiful composition by Michael Nyman, who was there playing the piano himself.

With its butterfly sleeves, a prudent length and belted waist, it was distinctly Roksanda, and for those that recognised it immediately, a sincere gesture that reminded us of the fact that Nicoll and Ilincic, as well as Christopher Kane and Erdem, were designers that came of age together in this very city.

After the look exited, Nyman’s pace sped into a more uplifting tempo. Roksanda’s rhythm picked up, too, with a succession of rich red hues, from scarlet to oxblood to burgundy, patched together in geometric shapes. The inspiration, she said, was the Abstract Expressionism exhibition at the Royal Academy last year, where richly layered Rothko paintings caught her eye — and inspired to do some colour layering of her own.

There were pops of other colours, such as mustard, cobalt and chestnut brown — but what really packed a punch was the full range of red, in everything from fluid, saturated silk tailoring and micro-pleated crepe; shearling-lined suede and patchworks of patent leather. Most of the looks had a languid silhouette, worn with substantial-looking gathered boots, and cinched at the waist by knotted leather ties or stomach-flattening obi belts.

What is it about that red, Roksanda? Was it danger, love, violence or lust? “It’s a feminine colour,” she replied simply. All of the aforementioned could be seen in it, though, sort of like the viscerally meditative and transformative quality of Mark Rothko’s paintings. Ilincic added that she couldn’t help but be influenced by what’s going on in the world right now. Red must have resonated with the anger she feels about it, just like the rest of us.