If the collection’s archness was distancing, it struck one genuine chord with the designer’s tribute to soon-to-close Colette. 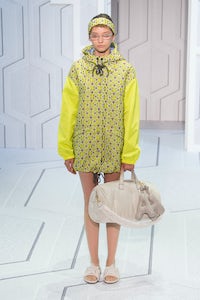 If the collection’s archness was distancing, it struck one genuine chord with the designer’s tribute to soon-to-close Colette.

LONDON, United Kingdom — Anya Hindmarch has the drollest eye for detail. The invitation for her latest show – she described it as “a symphony to suburbia” - arrived with a cake of Cusson’s Imperial Leather soap, without which no aspirational suburban bathroom would have been complete in the 60s and 70s. And she offered the wardrobe to match: quilted housecoats, little outfits for lounging by your kidney-shaped pool, columnar hostess dresses candlewicked like the bedspreads of the period (the glitter slippers were only for hostesses with the absolute mostest). The wallpaper patterns and colour palette (greens, pinks and yellows that were slightly off/) were of a piece with Miuccia Prada’s famous Spring 1996 collection which exalted “the good taste of bad taste”. Hindmarch plastered a big pussycat across a tote, and turned a quilted satin pouffe into a huge handbag, or a Big Mac takeaway box into a sleek silver minaudiere.

For this show, her set, usually a standout, was a solidly blank suburban house, like the little boxes on a hillside. “But in every box, there are amazing big dreams,” she insisted. In every dream home, there is also heartache. So sang the prophet Bryan Ferry. Maybe that’s what Hindmarch was acknowledging when she called her collection Absurbia. It was certainly surreal enough. Even the bags that are the core of her business were touched with strangeness, big, soft, quilted things, partly inspired by the Austrian artist Erwin Wurm, whose work often transmutes banal everyday objects. Hindmarch was well away on that one with her candlewick bedspreads.
But if the collection’s archness was distancing,  it struck one genuine chord with the designer’s tribute to soon-to-close Parisian emporium Colette. “Colette, I was there 1997-2017,” read the heart-shaped applique. And that/ passing is heartache.