At Anya Hindmarch, Something Weird and Beautiful

Video games last season, geometry this: Anya Hindmarch's ability to find poetry and humour in the mechanical is becoming something of a calling card. 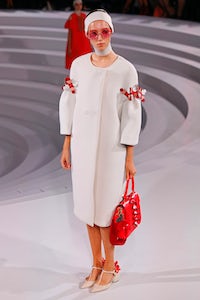 At Anya Hindmarch, Something Weird and Beautiful

Video games last season, geometry this: Anya Hindmarch's ability to find poetry and humour in the mechanical is becoming something of a calling card.

LONDON, United Kingdom — Anya Hindmarch wasn’t a good maths student at school. Her interest in the subject came later, as her design career took her into a world of pure forms. She called her latest collection Circulus. “It doesn’t really mean anything,” she insisted, though one of the various scientific definitions of the word is a small mollusc that belongs to the gastropod family, a genus which includes snails and various other things that live in spiralled shells. Spirals and circles and geometric forms that relate to art were the foundation for the collection, and the spectacular show that launched it.

We entered to a huge white disc flush with the floor, suspended from chains. It rose to reveal a recessed white amphitheatre around which the models paraded, while the disc hovered above them like a massive sun, changing through a spectrum of unearthly colours.

At show’s end, the disc descended again, plugging the circle in the floor, leaving no trace of what had just happened. The effect was startling, trancelike, almost like we'd just watched an Amazonian ritual on a distant planet. (It took two months of engineering, and apparently the models had to move quickly if they didn’t want to be pancaked in the world’s biggest press.)

Oh yes, Hindmarch also showed her new bags, and the coats, bathing suits and shoes that went with them. In keeping with the sci-fi setting, all the clothes were cut from neoprene in appropriately synthetic colours like coral, peach, lime, icy blues and lilacs. Sharp, pretty, they held their own against the clinical white backdrop.

The determining detail of the season was a geometric leather strap, an interlocking molecular strand which Hindmarch used as a handle on bags, as a sleeve or collar detail on coats, to accent closures of every kind. “Weird and beautiful,” she called it. She wasn’t wrong. Video games last season, geometry this: her ability to find poetry and humour in the mechanical is becoming something of a calling card. (The furry fried eggs and smiley face emojis were a holdover from Autumn/Winter.) The Stack, a new bag style, featured half a dozen zipped compartments, one on top of the other. That’s a lot of hardware. But the graded colour added art to the craft. Impressive.