The anatomical dissection that has always distinguished Samuel Ross' work from other streetwear stars was more precise, more colourful and more aesthetic. 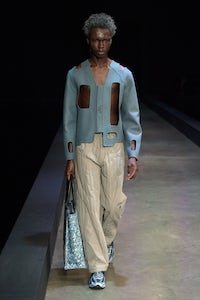 The anatomical dissection that has always distinguished Samuel Ross' work from other streetwear stars was more precise, more colourful and more aesthetic.

LONDON, United Kingdom — Samuel Ross is a fashion polymath, a man with sufficient imagination, energy and time to design a complex collection of clothing and accessories, to conceptualise an equally complex presentation for his creation, and to compose an elaborate electronic soundtrack to underscore the whole thing. And then, after Monday morning’s event, he was able to talk bottom line like the most seasoned garmento: production capacity, projected growth, price point, the significant shrinkage of logo, reflecting a sophisticated sensitivity to the evolution of A-Cold-Wall's niche.

“How do I speak to a fashion consumer while keeping my core cult involved?” Ross wondered. In fact, he was so accomplished at defining the business nuts and bolts that I was struck by something radiantly obvious. In his own words, “the collection exists alongside the performance art.” Or, in someone else's words, you can’t have one without the other. As the business grows, so does Ross’s hunger to contextualise what he does, give it the deepest possible meaning. For a designer as angsty as he is, such hunger is a bare necessity. But it’s a delicate balance.

Ross said he worked for six months on the performance aspect of his latest show. It opened on three figures huddled in darkness at one end of a rectangle of dark water. As they heaved themselves laboriously towards a raft at the other end of the rectangle, the collection was paraded on an adjacent catwalk by models who cast nervous backward glances, like they were being pursued. It Follows! Shadows thickened, guard dogs barked.

I was reminded of Anne Imhof’s scary installation in the German Pavilion at the last Venice Biennale. Ross hadn’t heard of Imhof, but there was clearly a zeitgeistig something or other going on. The dark water, the Dobermans, primal fear. “The base fear of what comes next, how it sounds and what it looks like,” read the shownotes. Political turmoil, the rise of populism, xenophobia - all of it echoed in Ross's staging.

The effortfulness of the presentation was glaringly obvious, but it was curious how that didn’t impinge on the clothes. “Dystopian optimism,” Ross cheerfully agreed. He said his new show was a symphony compared to his aggressively chaotic last: “a slower pace, softer, more elegant, more sophisticated”. That translated to a more tailored feel. The anatomical dissection that has always distinguished Ross’s work from other streetwear stars was more precise, more colourful, more aesthetic, with his zips, flaps, cutouts and assorted doodads creating something lean and futuristic, though Ross himself clearly preferred modernism to futurism.

The Modernist was a motif that cropped up throughout the collection. But it’s such an ironic notion. As soon as you’re modern, you’re out of date. And maybe Ross knew that too. He closed his show with a strange, strong image - while exhausted figures froze in the dark water, a stately shape made its way down the catwalk, swathed in regal robes. Except they were carved from transparent PVC. It seemed like a perfect metaphor for the emperor's new clothes, and for Ross's own conviction that fashion has to find a different way to re-attach to reality.