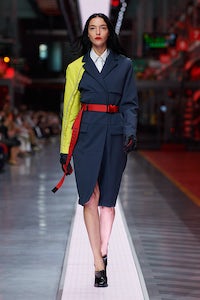 “Ferrari is part of the collective imagination,” read the first line of the manifesto that was handed to guests today at the show — a striking spectacle staged in the Ferrari assembly plant in Maranello — that marked the revered Italian sports car maker’s first luxury fashion collection, part of a wider plan to upscale its brand extensions. Of course, being “part of the collective imagination” is what makes these brand extensions both exciting and perilous.

How does one translate sports cars into clothing that fashion-forward Ferrari fans want to buy? Rocco Iannone, the softly-spoken, analytical designer tasked with the job, went for a humanistic approach. “Both our cars and our clothing are built around the human body,” he said. “Other values they share are performance, innovation, aesthetic and craft.”

The thought process that led Iannone from cars to intricately constructed, robotic, gender-fluid outerwear and logo-splattered pieces swinging between soft feminine silks and voluminous masculine streetwear was convincing, if at times literal.

In sum, Iannone is on the right track. The decision to target the young, logo-obsessed clientele that luxury houses are courting en masse seemed wise. There were a few ladylike openings in the collection, and that was smart. Overall, the language was bold: graphic, colourful, with lots of asymmetries and, yes, an avalanche of logos. It made the transition from the merch that Ferrari has produced in the past to today’s fashion debut easier. The long, Off-White redolent ribbon belts will surely get fans salivating; the robotic outerwear might be a harder sell.

Extra boldness — a louder, brasher tone as roaring as the cars — might have worked nicely. The designer was close, but he could have gone a bit further. Honing a fashion identity takes time.