In lieu of a show, the visionary designer presented a powerful film about the creation that comes from endless destruction, but one couldn't help seeing how repetitive Pugh's work can be. 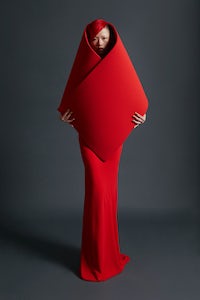 In lieu of a show, the visionary designer presented a powerful film about the creation that comes from endless destruction, but one couldn't help seeing how repetitive Pugh's work can be.

LONDON, United Kingdom — Is the catwalk show over? Not yet, even though designers continue to explore alternative forms of presentations clothes, expecially in London where fashion is more about progressive ideas than mere product. Video is a natural solution and an old one, actually — Rifat Ozbek, for one, was there almost thirty years ago with John Maybury.

Gareth Pugh is already a video veteran. He collaborated with Ruth Hogben on a memorably trippy, sci-fi kaleidoscope extravaganza in lieu of one of his Paris shows and again on an angelic neo-geo fantasy shown at Pitti in Florence. Although intensely visionary, these films revolved first and foremost around the clothes: one way or another, you could clearly see the silhouettes. The indulgently macabre movie Pugh showed today at a local Imax theater — a place usually reserved for popular blockbusters, the show notes prodly announced — was of a wholly different type.

It was less about the fashion and more about the creative struggle behind the product. It was about duality — a Pugh staple — and ultimately the ascension from darkness and chaos to geometry and serenity. Visually, it was striking, at times it was unbearable, but certainly magnetic. It also gave a poignant insight into the designer's modus operandi. In order to get it right, Pugh enlisted the maverick photographer and film director Nick Knight, the artist Olivier de Sagazan and the choreographer Wayne McGregor. The result was superb, yet somehow it also highlighted the punctum dolens in Pugh's work.

At their best, the on-screen images exuded in fact a hot-blooded, womb-like quality that felt at odds with the theatrical coldness of Pugh's creations. While the film was all about the creation that comes from endless destruction, one could not help questioning how repetitive Pugh's work can be. He's been stuck with the same shapes since, like, forever. If the movie is the signal of a new start — there was really too little fashion on display to judge — then this is a good thing. Otherwise, it was just entertainment, which, in these times, isn't such a bad thing.