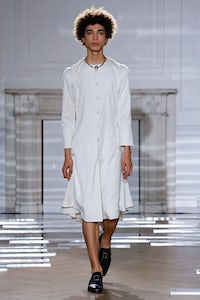 LONDON, United Kingdom — To date, LVMH 2016 prize-winner Grace Wales Bonner’s collections have been defined by lush, elegant hybrids of Europe and Africa. For her first stand-alone presentation outside the Fashion East umbrella, she crossed the Atlantic to the Caribbean, a crucible that, in forcing cultures and faiths together in equatorial heat, offered an even more powerful trigger to her imagination.

The scope of Wales Bonner’s vision was defined by the title she gave her latest collection: Ezekiel. His Old Testament prophecies played a part in the elevation of Haile Selassie, Emperor of Ethiopia, as a new black messiah. Selassie was famously regarded as such by Jamaica’s Rastafarians, which brings us back to the Caribbean. Worlds bridge, as Wales Bonner observed in her shownotes. But worlds also bridged in Selassie’s integration of formal Western dress and his own ceremonial traditions, and that was one of Wales Bonner’s touchstones for her actual designs.

The clothes were a conversation between rigorous, linear tailoring, silken flou and artisanal handcrafts. If there was a sense of one kind of history in a priestly capelet or the line of a long, high-closing coat or the romance of a poet shirt, there was another in the crocheted collar on a black leather bomber, or the crocheted waistband on the trousers of the immaculately precise evening look with which Wales Bonner closed her show.

Her subtle integration of these different vocabularies has been a signature from the start, and it’s kickstarted her career, still barely two years old since graduating from Central St. Martin’s, to a spectacular degree. Quietly intense, Wales Bonner insists the attention has made her feel more confident, rather than pressured.

And there was at least one look in this new collection which illuminated her glittering future: a three-quarter-sleeved ivory silk shirt flowing over cropped leather motocross pants was a hybrid that so seductively bridged those cultures and faiths we were just talking about that it made you giddy with the heat of the crucible. 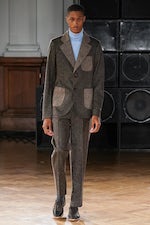 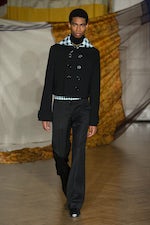 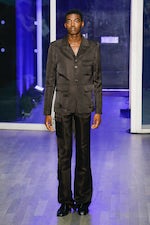 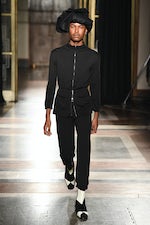