Women designers, from Stella McCartney to Sacai’s Chitose Abe to Tory Burch, brought a sense of hope and purpose to the Spring shows, writes Tim Blanks.

Women designers, from Stella McCartney to Sacai’s Chitose Abe to Tory Burch, brought a sense of hope and purpose to the Spring shows, writes Tim Blanks.

If you are looking for a ray of hope after weeks of fashion’s virtual spring with Europe and the United States still unable to bring Covid-19 under control, I give you this: INDEPENDENT WOMEN. London fielded an entire farm team of creative young women who will flaunt fashion’s future in the face of the political frat boys whose last-gasp power plays continue to shroud us in misery. Paria Farzaneh, Supriya Lele, Priya Ahluwalia, Bianca Saunders, Bethany Williams, Phoebe English… each voice so completely distinctive, so engaged, politically and socially, on a gut level with the issues that have riven the world throughout this blighted year. They joined their more established sisters Simone Rocha, Molly Goddard and Roksanda Ilinčić to create a formidable groundswell.

Too bad there wasn’t much of that anywhere else. Stella McCartney staged her virtual happening in the sculpture garden of Houghton Hall in Norfolk, or, more specifically around Richard Long’s “Full Moon Circle,” an elemental ring of black slate and flint. Chitose Abe showed her collection for Sacai in the Enoura Observatory of the Odawara Art Foundation, perched high on a cliff above Sagami Bay two hours from Tokyo. The artist Hiroshi Sugimoto opened the foundation in 2017 with the expressed intention of harmonising culture and nature. And isn’t that where we would all like to be right now? 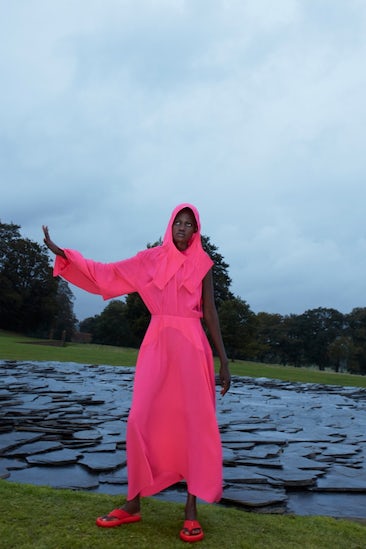 Designers everywhere have been talking about the discipline imposed on them by coronavirus lockdowns. No fussing and fighting over coming up with multiple collections, just the naked focus on survival. It rang clarion clear in McCartney’s collection. Her much-vaunted Savile Row training hasn’t always been as present in her loosey-goosey tailoring as one might have wished, but here, she matched a sleek little jacket to a baggy multi-pleated pant for a sensational look that echoed David Bowie in his sartorial pomp. Same with a shapely safari jacket over a flared skating skirt. And that same sophisticated sense of the body in clothes infused abbreviated lace dresses sculpted to the torso.

In a post-show Zoom, McCartney said she wanted to capture the sense of being alive, of being physically and mentally active, that had become so important to people during lockdown. She added that the dresses were constructed from upcycled scraps left over from old collections. That was very much in keeping with an industry-wide make-do drive, which kinda made you wonder why this didn’t happen all the time with all those mountains of fabric left over each season. I mean, did you always insist on something new? How many fashion addicts do you know who were always playing catch-up with last season?

Do more with less. McCartney isolated that as a goal of her business: an industry that is circular, rather than linear. She showed those little lace dresses, particularly fabulous in hot pink, with flip flops, 50 percent of whose thick sole was made of “waste.” With a heel, the look would have switched 180 degrees. “That’s not a Stella woman,” McCartney snorted. There was a time when the Stella woman was an outrider. No more. After 20 years in business, McCartney has found her ethos finally dovetailing with a fashion industry that must change or die. For those who still need hand-holding, she launched an A-Z manifesto this season, each letter in the alphabet representing one element of her design credo, illustrated by an artist friend or acquaintance (one personal favourite is T for Timeless, accompanied by a William Eggleston photograph, though L, with a photo of Stella’s mother Linda leaning against a standing stone on the McCartney farm in Scotland runs it close). And, helpfully, each letter was embodied by one of the 26 looks in her collection. 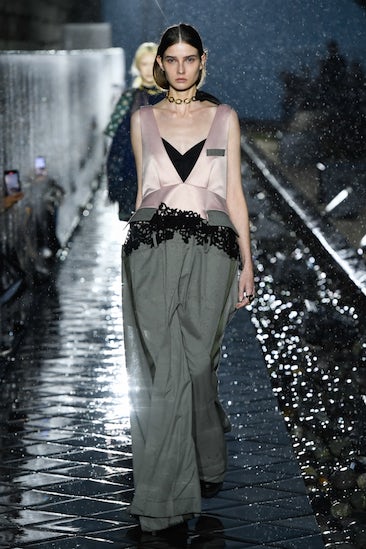 Chitose Abe, Zooming in from Tokyo, insisted that sustainability had always been a fundamental principle for her because she’d always produced to order so there were never any leftovers. At the same time, the hybrid garments that are her signature have effectively communicated the notion that nothing need ever go to waste, because there is a place for everything. Even if it’s just a fabulous illusion, the hybrid element was still seductively strong in Abe’s new collection. Graphic too, in the way that the top half of a tailored jacket was shoe-horned together with the bottom half of a man’s coat, joined in the middle at a paper-bag waist; or the top of a pink duchesse slip dress was sutured to baggy trousers. Love it or not, you can never deny the intrigue of a Sacai silhouette.

One feature of the collection was stripes, not printed or knitted, but sewn together from thick strips of satin or sheer fabrics. They were deliberately dishabille, which fitted with a general air of unpreciousness. It was direct, quite fierce in its reappropriation of military elements, like the MA-1 jacket upended as a tulip-shaped skirt. That combination of strength and femininity found its muse in Sade, a longtime favourite of Abe’s. Albert Watson’s portrait of the singer featured on t-shirts, and her song “Kiss of Life” soundtracked the finale, with the models walking in pouring rain, an unanticipated collision of culture and nature. The raindrops sparkled like sequins on their clothes. The audience thought it was planned. It is Japan’s typhoon season, after all.

In staging a show at all, Abe had made it clear where she stands on the future. “It was a way to show optimism,” she insisted via her translator. McCartney was equally upbeat. “People still have to get dressed,” she said. “That’s why there was so much colour in the collection. It’s hope. We’re planning for a celebration collection.” 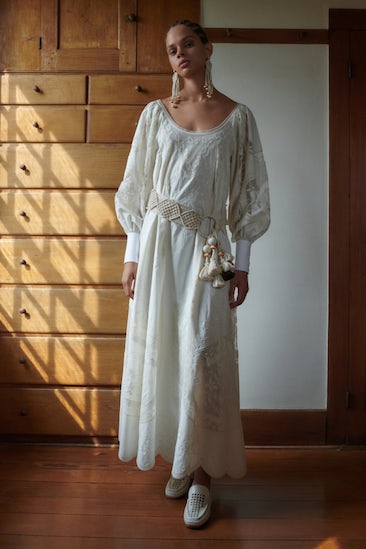 Tory Burch was on the same wavelength when she talked about her customers still needing “to feel great and look great.” She said her 86-year-old mother was dressing to the nines for family visits. A suede jacket she’d had made in Italy years earlier showed up in her daughter’s collection, which fit with Burch’s theme of memories as an escape from a chaotic here and now. Tory was educated at a Quaker school, and the translation of that discipline into a Shaker aesthetic shaped her collection: beauty rests in utility. The notion of purposeful craftsmanship felt particularly relevant in the embroidery, the macramé, the cutwork, the artist’s dresses with big pockets that Burch imagined filled with tools. A real working woman.

Burch had already cancelled her Spring/Summer 2021 show before Covid-19 slammed into New York. She said that as a woman designing for women, she didn’t need a pandemic to tell her that fashion was due a rationalisation. Though she was speaking from a more commercially elevated platform than those women in London, I felt a distant commonality. In an ideal future, fashion will be about an intimate relationship between designer and customer. Something authentic, simultaneously uplifting and humble. (By the way, humility doesn’t preclude grandeur, c.f. Cristóbal Balenciaga.)

While her customers shopped online during their quarantine, Burch was able to isolate a few trends. They were surprisingly young, and they were looking for brands with purpose. Circularity is one of fashion’s grails, so I can take what Tory told me and spiral it back to the very beginning of this story. Young London brimming with passionate purpose. The Future.