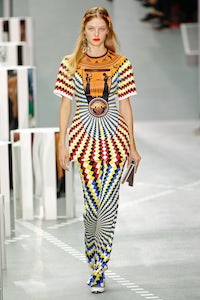 LONDON, United Kingdom — Fashion loves a narrative and people love an origin story, so Mary Katrantzou returning to her design roots in her new collection should have been a slam-dunk. But a funny thing happened on the way to the Parthenon. Mary lost her way.

Katrantzou’s earliest collections, rich with dazzling trompe l’oeil, created one of the most distinctive design signatures of the past decade, so distinctive, in fact, that her efforts to move on have been dogged by that early success. Her ability to trick the eye became a gimme, and when her audience didn’t get, they wavered in their commitment.

So there was logic in returning to trompe l’oeil with her latest collection. To her credit, she put a new spin on it, making a connection between op art and what would have been the pop art of Ancient Greece, the designs on amphorae, the tall narrow jugs used for wine or oil. The fusion looked best in a tunic-and-long-lean-pant situation, where the fact that op and (ancient) pop were so out of sync created something exquisitely peculiar. And that certainly recaptured her work’s original impact.

The hourglass amphora shape was duplicated in another trompe effect to draw the eye to the waist, sometimes with flocking, other times with embellishment which closed in on a central point. The finale of long, peplumed hobble skirts also drew on antique elongation. Katrantzou said the silhouette was based on the outfits worn by Minoan women around 3000BC (they were apparently the first people to seam their clothes). The mind boggled. But the eye wasn’t seduced.

What was seductive were the flapper dresses clacking along in scales of Perspex. Again, exquisitely peculiar. And Katrantzou’s craft was as unimpeachable as ever. The chain mail dresses, for instance, bonded with lace and overprinted, were an impressive technical feat. But it’s odd in a collection so grounded in her own culture that there should be such a strong sense of something missing.

She talked about “an archaeological exploration”, in her own past, as much as her country’s. Maybe with all that digging so close to home, it was simply a little harder for Katrantzou to dream.