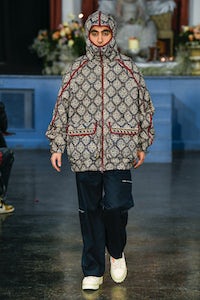 LONDON, United Kingdom — “Catwalks don’t do anything for me,” Paria Farzaneh declared with typical directness to a small circle of inquisitors after her show on Saturday. “I’d rather encapsulate your feeling and emotion.” In other words, it’s what we think that is more consequential to her. “I put it out there and the rest is up to you.”

That is why Farzaneh’s presentations are so loaded. She called her latest Ceremony, bookending her parade of menswear with an Iranian wedding. The bride and groom sat under a veil while female relatives showered them with sugar, the traditional wish for sweetness in marriage and life. The audience was divided, women on one side, men on the other. I thought that was another tradition. Farzaneh claimed it was her way of giving a particularly graphic expression to the gender imbalance in the fashion industry. Yes, there were more men. She definitely has a knack for infusing everything she does with subtly acute commentary.

Like her reference to environmental artist Olafur Eliasson and his recent show at Tate Modern in her notes. “He brought people to a surreal space,” Farzaneh explained. “Never be defined by the walls you’re inside. Here you are in a boy’s school in the East End on January 4 and I’ve taken you to an Iranian wedding.” And on January 3, Donald Trump ordered the assassination of the second most powerful man in Iran. Current events do have a way of intruding on fashion seasons. Farzaneh’s only comment was that she wanted her show to be “a moment of calm, bringing you all here to a place you’ve never been.” Anything else would be on us.

Still, her clothes couldn’t help taking their own stand. The strong military/utility edge — the khaki, the cargo pants, a hit of MA-1 orange — reflected the military service that is compulsory for Iranian men. (It was, again, on me that I imagined the young groom conscripted into the war that may, from all accounts, be coming.) Gore-tex — Farzaneh said she is the only designer who’s been granted a licence to use the material — was the foundation of high-performance pieces that reflected her view of life as an “expedition.” Special mention is due the styling flourish that turned a sweatshirt and its sleeves into an elegantly skirted apron.

As proficiently masculine as those things were, it was still the delicate beauty of her traditional prints that ruled her collection. They’re a spectacular calling card for the designer, hand-blocked in Isfahan on organic cotton, dyed with turmeric and saffron and nothing chemical at all, washed in rivers, dried in sunshine. There is something utterly joyous about them, and Farzaneh artfully elevates even her most prosaic pieces by inserting print into seams or using panels of it to articulate the body. She talked about a man’s pride when he looks good, and how that in turn makes him proud of what he’s wearing. That is the story she insists she wants to tell, doing her fellow Iranians proud. “All this other stuff is irrelevant,” she scoffed. “It’s time to be honest, and I’m just being honest.” All power to her.