There was something restrained about this show, all the way to the last look, which felt like John Galliano was holding fire, poised, plotting his next assault on orthodoxy. 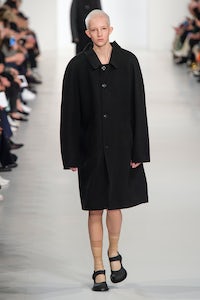 There was something restrained about this show, all the way to the last look, which felt like John Galliano was holding fire, poised, plotting his next assault on orthodoxy.

PARIS, France — Love won, love lost, love won again at fatal cost: “Swan Lake” strikes chords that echo through centuries. And here was Tchaikovsky’s music as the soundtrack for Maison Margiela. Nothing John Galliano does is casual. You had to wonder where Swan Lake fitted into his current fashion scenario. Matthew Bourne's all-male reconceptualisation of the classic ballet? The masquerade of the evil Odile as the angelic Odette? That kind of worked. In his latest hauntingly sibilant podcast, Galliano referred to the confusion of fabrication with truth. The appropriation of the inappropriate.

Or vice versa. Trousers went north, jackets went south. Gender followed. The authenticity of herringbone, grey flannel, chunky knitwear was de-seamed and flattened. Classicism unhinged yielded swirling skirt and cape volumes. A stolid topcoat turned jumpsuit, traced with zippers. It’s often been said that the couture was a laboratory in which the experiments that shaped ready-to-wear were conducted. That would mean Galliano’s Artisanal and Male Couture collections were here distilled into accessibility. To a large degree, that was true. The show opened with strong, sober exercises in pure silhouette and cut, where familiarity held sway. Throughout the presentation, there were suits and coats that reeked of an almost fetishistic discipline. But the manifesto that accompanied the show announced, “Degeneration is a decadent process through which an entity is reduced to its purest core.” Cue the reduction of entities. That is, after all, what you wait for with Galliano. The ascent into a transporting otherness, where traditional boundaries dissolve. There was a little of that here: the swan in the sequined halter and poor boy pants, the swan in the quilted clutch coat, the florid pink flamingoes, assuming the role of Artisanal’s blue poodles as poster children for Galliano’s “decadent process.” He imagined them in Marie Antoinette’s garden, I saw them outside Divine’s mobile home in John Waters’s “Pink Flamingos.”

I’m sure that was deliberate. Galliano is sly, and defiant with it. “Ready to wear, ready to dare”, he declared in his podcast. His innately subversive spirit is inclined to a simultaneous celebration and upending of tradition. (Very Robespierre!) But there was something restrained about this show, all the way to the last look, which felt like Galliano was holding fire, poised, plotting his next assault on orthodoxy. Promise and threat.