The collection was highly desirable, but there were hints of Céline-isms that the designer must take care to iron out. 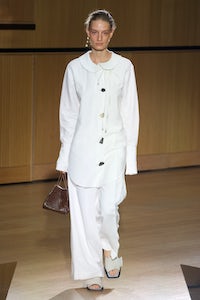 The collection was highly desirable, but there were hints of Céline-isms that the designer must take care to iron out.

LONDON, United Kingdom — Unless you’ve been hiding under a rock for the last year or so, you’ll have seen Rejina Pyo’s street style-friendly clothes on every influencer from New York to Paris. For her first catwalk show, several social media stars lined the front row, wearing Pyo’s designs. But the show's casting (by former model Ben Grimes) dove deeper than the slick perfection of the Insta-world, including a range of women of all ages. The result was a line-up on whom the clothes looked real (as in IRL) and desirable.

There was a suit of double-breasted tailoring with soupy trousers in sage green, taffy pink and windowpane check, as well as sharply defined coats with mismatched stone buttons. What came as a surprise was the emphasis on cocktail-hour numbers, from ruched bustier dress with an ivory bust and crimson columnar bodice, to a scarlet tiered gown, and pale gold lamé dresses cut on the bias.

Whatever the hour, Pyo’s clothes seems sure to be popular with her 100-plus stockists around the world. “I spoke the retailers and they tell me that one day it’s a cool 20-year-old girl buying it and the next it is a 50-year-old women,” she said, explaining how, this season, she was drawn to Nicholas Nixon’s portraits of four sisters who have been photographed every year since 1975. “It’s a mix, so I always design for that.”

The accessories also deserve a mention, especially the Alexander Calder-inspired jewellery designed in collaboration with Anissa Kermiche; those statement earrings will be perfect for selfies. There were also five handbag styles designed to complete the collection, in mock crocodile, buttery leather and suede in classic hues like black and brown. They’ll surely hit a sweet spot for the Korean designer, too.

There were hints of Céline-isms in the collection — those pebble-like buttons; the white seam stitching and squared-off pockets; the Perspex sunglasses — but that’s not to say that it looked derivative. She must be careful to iron out those similarities, though, in order to be seen as a design leader and sustain the buzz around her label.