LONDON, United Kingdom — Fashion and art can be uncomfortable, if increasingly common, bedfellows. But the commingling of the two disciplines has always come naturally to Roksanda Ilincic. The designer studied architecture first, fashion second. And her third show London’s Serpentine Gallery re-emphasised her strong connections to the contemporary art world. “I want to combine architecture, art and fashion,” she said after the show. “This is happening a lot here in London at the moment; it is one of the positive things coming out of other negative things,” she added in a lightly veiled reference to the shadow of Brexit hanging over London Fashion Week, despite the unusually bright blue skies. 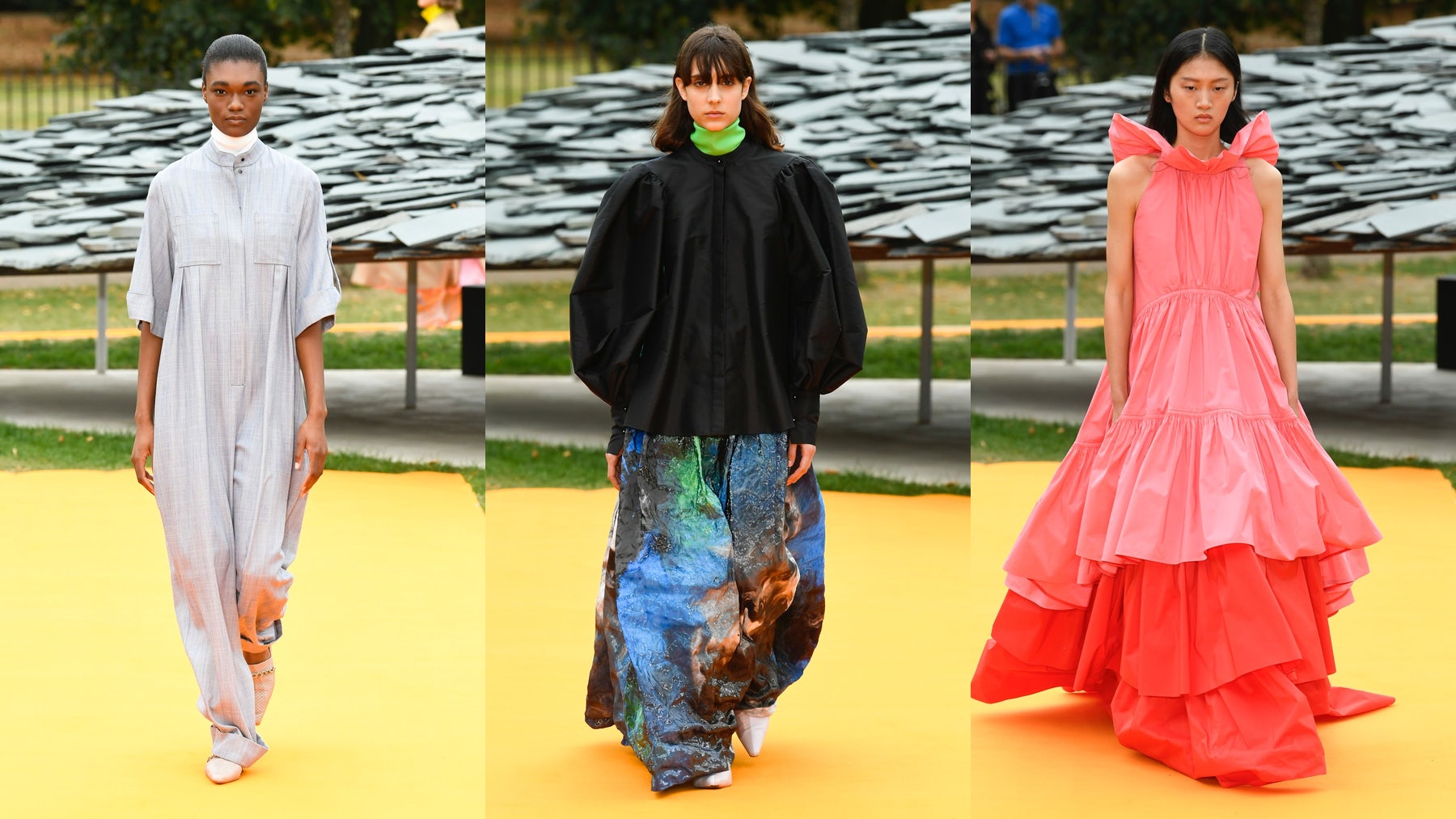 Models came out from under the slate-roof of Junya Ishigami’s Serpentine Pavillion along a snaking tangerine runway that was a nod to Christo and Jeanne Claude’s The Floating Piers. Ilincic mentioned the neon-accented paintings of Mary Weatherford as her inspiration, so there were mottled painterly prints, also informed by the decaying layers of art posters. What really stood out was the textures — especially on Watteau-back gowns in crinkly taffeta woven with metallic thread and nipped in by drawstrings — and some of the more utilitarian pieces that we saw Ilincic experiment with last season. This time, it was boxy shirts, layered over turtlenecks, roomy suiting-fabric boiler suits and cargo jackets with the detachable sleeves, as the designer explained, to be worn round the clock. There was even her version of a tracksuit — a marled grey jersey trouser suit with a sweatshirt worn underneath. It’s hardly athleisure, but for Ilincic it marked a confident step outside her comfort zone. 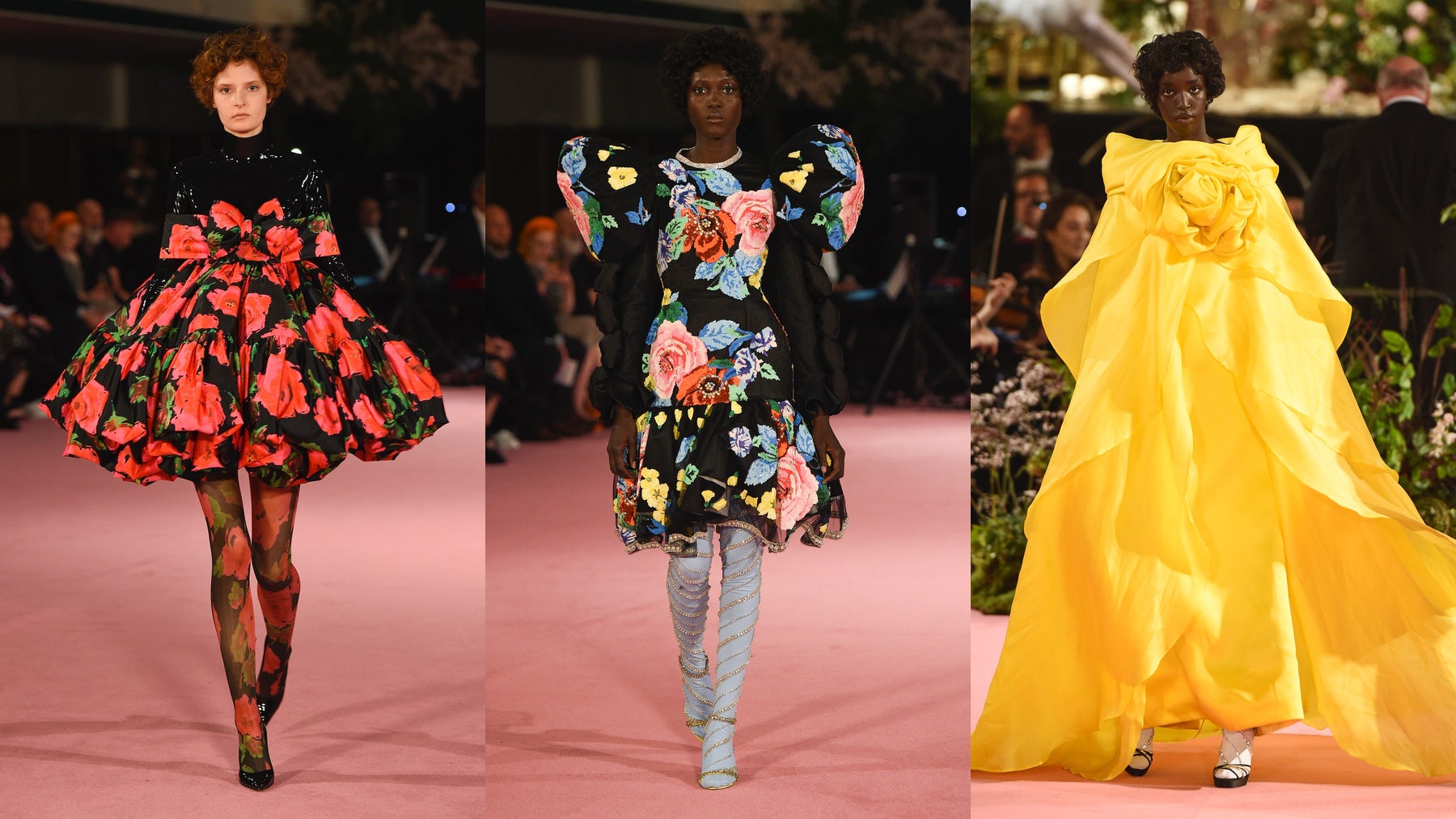 That same evening, Richard Quinn also grappled with the tension between fashion and art. His shows are about spectacle and creating a dramatic atmosphere for his even more dramatic designs, whether that’s polka dot puffball dresses or sweeping gowns in his signature floral prints. Increasingly, fashion is craving clothes that lend themselves to dramatic Instagram imagery — and Quinn understands that being bold is what counts. It’s likely why Moncler chief executive Remo Ruffini said on Friday that Quinn’s ‘Genius’ collaboration with the Italian ski-jackets brand was his favourite.

Quinn certainly knows how to put on a show. He got London’s Philharmonic Orchestra and Bach Choir to score the event, which was a non-stop parade of going-out dresses fit for a fairytale. There was even a bevy of schoolgirls for the second time in one day (Roksanda invited her nine-year-old daughter’s class of to her show). A flurry of feathered-bonneted girls followed blast-from-the-past Jacquetta Wheeler like a line of feather ducklings. The show closed with a grand finale: a tableau vivant of Quinn’s new bridal collection that looked as if a Steven Meisel photograph had come to life. It was a confident and assured move. Quinn knows that fashion is not art but can have a storytelling magic unto itself.