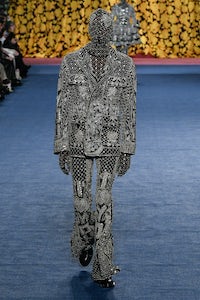 LONDON, United Kingdom — “The world opens…and opens again.” Richard Quinn’s cryptic post-show comment hinted at the extraordinary ambition of his presentation on Saturday night. His business is scarcely more than two years old and already he’s talking about building a house, in the grand old-school fashion sense of the word. Maybe that’s inevitable when the Queen herself attends your first runway show. You have clearly been touched by the hand of God. And that was, in fact, the message conveyed by the embroidery on the jackets of his Pearly Kings and Queens: GOD SAVE THE QUINN.

His backdrop was an impressive basalt neo-classical frontage, garlanded with an extravagance of flowers. The doors swung wide to welcome us to the House of Quinn, “a fashion dreamhouse,” the designer’s indefatigable booster Sarah Mower wrote in her shownotes. And dreamhouse it was, populated by fantastical creatures whose detachment from quotidian reality was absolute. The Pearly Kings and Queens are traditional fund-raising figureheads in London’s East End, famous for their lavishly embroidered outfits, but Quinn also wreathed their heads in beading. Reminded me of 2012’s glory days at Maison Martin Margiela, when Kanye West wore the crystal-crusted Artisanal masks onstage. Quinn concealed more faces, matching mask to outfit: a zippered black leather trench with a studded Hellraiser gimp mask, black latex paired with a gothic floral mini-crini that was Leigh Bowery Incarnate.

In every dreamhome a heartache, as Bryan Ferry so acidly crooned nearly 50 years ago. What’s changed? Quinn imagined different rooms filled with different people with different appetites. The irrational exuberance of puff sleeves and polka dots, blown roses and Lacroix’s satin fichus vs. the latex, the leather… and the menswear! Quinn called it armour. I saw android gigolos, their torsos tortured into wasp-waisted tank tops matched with toreador pants that erupted into maxi-flares. Mister Pose Billy Porter was seated in the front row, frustratingly inscrutable.

A house where people live in different rooms is often called a hotel. Quinn paraded a pair of twins in ice-pink satin. Twins in a hotel say one thing: The Shining. The Overlook amplified the notion that you can be anything you want to be when you’re paying for a room for the night. Quinn certainly mastered the sense of absolute release that implies.

Super-scale has become a thing in fashion — you’ve got Tomo Koizumi in Tokyo, Christopher John Rogers in New York, Quinn in London. And as much as there is a growing number of people talking about fashion rearranging the deckchairs on the Titanic, there’s a perverse elation in the fact that there are young talents who truly don’t give a fuck. Think pink. Dream BIG!