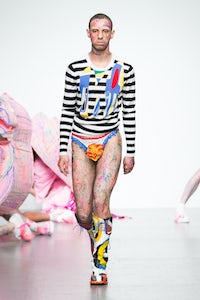 LONDON, United Kingdom — Charles Jeffrey’s presentation during London’s last men’s week was a thrilling journey through a dark, pagan landscape, compelled by the horror of the Trump/Brexit double-header. Scarcely anything had changed while Jeffrey was working on his new collection, but his show took place mere days after the Brexit engineers had brought them to their knees by their hubris — in a stunningly righteous reversal of fortune.

So there was cause for celebration. And celebrate Jeffrey did, with a collection – and an accompanying spectacle — that returned the joy of sheer creative anarchy to the London catwalk. From his initial parade of pink panto nymphs to the last gasp of a surrealist grande dame under full galleon sail, the designer mounted the kind of orgiastic, collaborative fashion pageant of which only this city – make that, country - is capable. So here’s mud in your eye, Terry Mayhem.

There was an inescapable forebear. It’s hard to see peculiarly proportioned pinstripes, the flare of a mini-crini, shock-horror sloganeering, cork platforms, punk tartans and panties on boys, all together in one place, without thinking of Vivienne Westwood. As heritage goes, there is no one finer, and Jeffrey did her proud. But there was also all the surreal window-dressing that was his own flourish. As if you couldn’t tell, Magritte is his favourite artist. The colour play in this collection, both in clothes and styling, was a polymorphous dream. And Jeffrey has his own approach to history. “The past is a different country and everyone is welcome,” he said over and over. But it was less the past of Viv’s Fragonard finery, more a kind of Walt Disney’s World of Victorian CrossDressers.

Ultimately, it was the we’re-all-in-this-together quality of the show that made it so infinitely London at its best. Theo Adams supplied the dance troupe, stomping away like Druids on a toot, which they do very well. Gary Card and his team whipped up their costumes, starting with some hi-falutin’ notion of Japanese theatre, ending with bodies scribbled all over by frat boys on a haze dare. Jack Appleyard was the majordomo. Jeffrey made him take a bow at the finale as an acknowledgment of his contribution. That generosity of spirit will carry him a long way.